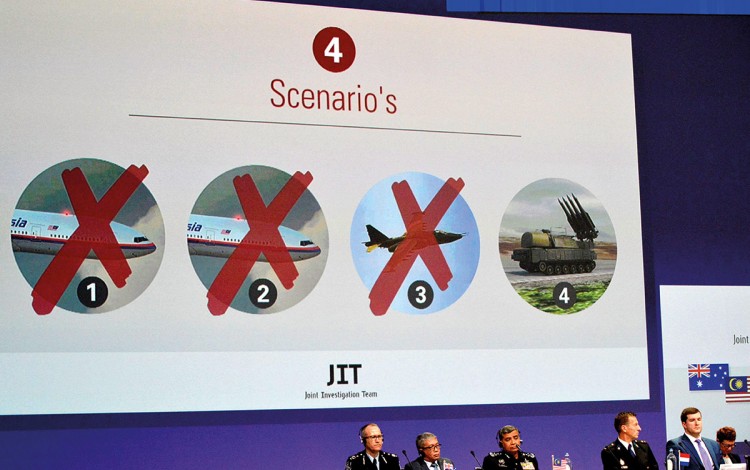 The recently released findings of the Joint Investigation Team (JIT) into the 17 July 2014 downing of Malaysia Airlines flight MH17 have pointed the finger firmly at Russia, while raising awkward questions over more than two years of Kremlin denials and elaborate disinformation campaigns. The results of the Dutch-led probe, made public on 28 September, clearly identified the cause of the attack as a Russian missile. Furthermore, the report concluded that the missile system involved in the attack came from Russia and travelled back across the border the same night.

While widely anticipated, the report's conclusions create an array of problems for Russia. Moscow now finds itself held responsible for one of the worst aviation disasters in history and potentially vulnerable to court cases and compensation claims from victim families. Crucially, it must also account for an intensive disinformation campaign that has produced theory after theory in a bid to deflect blame from the Kremlin. Russian denials over MH17 have been part of a much larger information effort designed to shroud the Kremlin's hybrid war against Ukraine in ambiguity. The entire facade of Kremlin denials is now in danger of crumbling.

Over the past two years, the Kremlin’s unprecedented disinformation efforts surrounding MH17 have served to provide international audiences with invaluable insight into the nature of Russian infowar tactics. Rather than simply deny any knowledge of the attack, Russian sources have offered up a wide range of alternative scenarios, most of which have attempted to pin blame for the killings on Ukraine. In the days following the attack, the Russian Ministry of Defence produced what it said was radar evidence of a Ukrainian fighter jet in the immediate vicinity of MH17. Eyewitnesses gave interviews on Russian state media, claiming to have personally seen (and identified) Ukrainian jets attacking MH17 at an altitude of approximately 10km. A Ukrainian Air Force pilot subsequently found himself named as the man responsible for downing the airliner, while crudely photoshopped satellite images showing a Ukrainian fighter jet in the process of shooting down flight MH17 appeared on Russian TV news bulletins.

As the investigation continued and the net began to close around the Kremlin, the flow of fakes and false leads continued. The Ukrainian Air Force jet fighter theory gave way to arguments that the missile responsible for the attack was in fact Ukrainian in origin. Some of the versions propagated by Kremlin officials and the Russian media bordered on the absurd. One of the more bizarre episodes of the whole affair was the appearance of a mysterious Spanish air traffic controller identified as ‘Carlos’, whose claims of Ukrainian guilt were given considerable Kremlin media exposure despite his complete lack of credentials. At one point, comically incompetent ‘secret recordings’ of incriminating conversations between supposed CIA agents were released. The fact that the voices featured bore no resemblance to the supposed individuals involved did little to bolster Russia’s case.

A fake too far

None of this came as a surprise to Ukrainian audiences, who have long since grown used to the Kremlin’s cynical use of fakes and distortions as a key component of Russian information warfare. However, until the aftermath of the MH17 attack, many outside observers had assumed the Russian media was merely guilty of the same kind of subjectivity and local biases found in any country. Russia’s response to MH17 has gone a long way to changing these perceptions, demonstrating to international audiences that Moscow feels no compunction about creating entirely false narratives – in many cases backed by the full weight of the state.

This realization will inevitably increase the pressure on the international community to adopt a tougher stance towards Russia, while dangerously eroding Kremlin credibility on the world stage. Few wish to enter into a direct confrontation with the Putin regime, but outrage over the apparent lies told by Moscow about MH17 will likely fuel demands for action. At the very least, the JIT findings will strengthen the case for extending the current international sanctions against Russia.

Russia finds itself in a particularly tight corner now because any acknowledgement of a role in the MH17 attack would mean de facto recognizing Moscow’s hybrid war in Ukraine in its entirety. Sophisticated anti-aircraft systems such as the BUK complex used in the MH17 attack do not cross international borders in isolation. Nor is it the kind of weapon non-specialists such as Putin’s notorious ‘miners and tractor drivers’ could hope to operate. The presence of a Russian BUK system in Ukraine is therefore a smoking gun pointing to the wider illicit deployment of the Russian military inside Ukraine. Kremlin denials of a conventional army presence in Ukraine already enjoy little credibility among the international community, but a direct confession would still be extremely damaging for Kremlin interests.

Even without any kind of acknowledgement from the Russian side of a role in the MH17 attack, it may take years to reverse the damage done by the Kremlin’s disinformation campaign. Russian officials will have to get used to encountering raised eyebrows and references to MH17, even when they are making relatively innocuous statements.

In the early nineteenth century, Scottish poet Walter Scott penned the famous line: “Oh, what a tangled web we weave, when first we practice to deceive.” Russia may well have cause to reflect on the continuing relevance of this observation as the country comes to terms with the fallout of its MH17 evasions.