KYIV FATIGUE: Ukraine must convince the West it is still a reliable ally in the fight against Putin’s global hybrid war 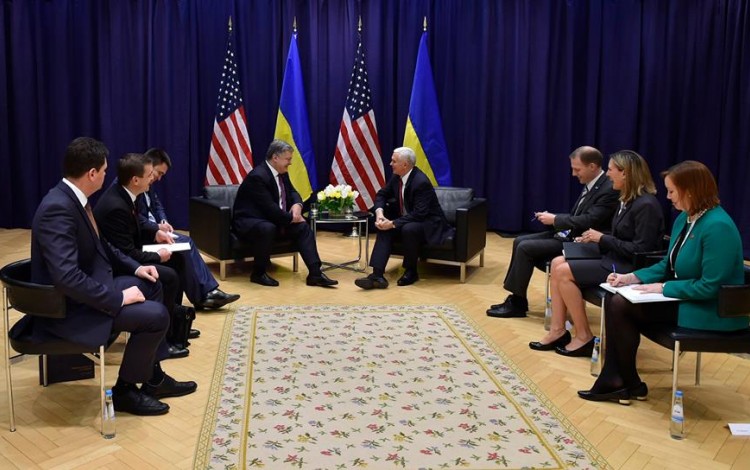 Ukrainian President Petro Poroshenko meets with US Vice President Mike Pence in Munich in February. The incoming Trump White House has so far been cautious over its approach to Russia’s hybrid war in Ukraine
Taras Kuzio

The recent publication by the US think tank Heritage Foundation of the 2017 Economic Freedom rankings shows a similar pattern of Ukrainian stagnation as the latest rankings from Transparency International. Despite much talk of a national transformation, Ukraine is still firmly rooted in the bottom tier of countries. According to the Heritage Foundation, Ukraine currently ranks alongside Belarus, Tajikistan and Turkmenistan. Meanwhile, Transparency International places only four Central Asian ex-Soviet countries below Ukraine.

Perhaps most alarmingly, the two think tanks identified higher levels of economic freedom and lower levels of corruption in the five members of the Moscow-led Eurasian Economic Union than they did in Ukraine, a country integrating into European structures. Meanwhile, the US State Department’s annual report on human rights for 2016 also pointed to the impunity of the ruling elites and ongoing corruption as significant problems in today’s Ukraine.

These latest rankings will further fuel concerns over the credibility of Ukraine’s post-Euromaidan transition. Three years into his presidency, President Poroshenko is clearly struggling to fulfil his 2014 election promise to create a Ukraine where Ukrainians could “Live in a New Way.” By not fulfilling his campaign pledge, Poroshenko risks becoming a threat to Ukraine’s national security by undermining international support for Ukraine at a critical time in the country’s history. Ukraine must present itself as a viable partner if it is to maintain Western support at current levels. This support is essential in order to safeguard Ukrainian sovereignty and independence.

As the recent upsurge in fighting around Avdiivka in eastern Ukrainian demonstrated, the conflict with Russian hybrid forces remains far from frozen. Ukrainian troops, National Guard forces, and the country’s volunteer movement are not just defending Ukraine’s territorial integrity. They are also protecting Ukrainian culture, language, history and national identity from a new era of Kremlin domination.

Defeat in the Donbas would mean the Belarus-ization of Ukraine. Fugitive former Ukrainian President Viktor Yanukovych would likely return to Kyiv as Russia’s satrap, while the DNR-LNR separatist enclaves would become the equivalent of the Serb-dominated Republika Srpska in Bosnia-Herzegovina. Meanwhile, the destruction of Ukrainian culture that has taken place since 2014 in Occupied Crimea and the occupied regions of eastern Ukraine gives a clear indication of what we could expect if Putin achieved his aims of derailing Ukraine’s European transition and forcing the country back into the Kremlin orbit. These high stakes make the government’s reform shortcomings all the harder to fathom.

Ukraine’s bid to break free of Russian domination has so far received considerable international backing. Despite a range of unpromising geopolitical trends, there is every chance this support can be maintained. While factors such as EU expansion fatigue and nationalist populism are working against Ukraine, Russia’s broader campaign of hybrid aggression against the Western world has helped create broad international agreement on the need to confront the Kremlin in Ukraine.

This international support could well prove decisive. Historically, Ukraine has fought many unsuccessful wars of national liberation alone, with a lack of international backing often playing a key role in the failure of these independence bids. After the Russian Revolution, and again in the 1940s, Ukraine’s desire to create an independent state floundered due to lack of outside support. Today, Ukraine does not stand alone, largely because Russian President Vladimir Putin is waging a hybrid war against the entire Western world.

At the end of 2016, when outgoing US President Barack Obama expelled 35 Russian spies, the West belatedly woke up to the uncomfortable fact that Russia has long believed it is at war with them. Prior to this realization, Western governments had long assumed the post-Cold War peace dividend was self-evidently advantageous for all parties. It has therefore come as a shock to find the liberal international order under threat from an aggressive Russia. Inevitably, many in the West preferred to remain in denial, despite the 2014 Kremlin invasion of Crimea. In fact, the roots of the current hybrid conflict go back even further. Putin declared his war against the West a decade ago with his famous speech to the Munich Security Conference.

Many Euro-Atlantic policymakers now recognize the Kremlin intervention in Ukraine as part of Putin’s wider war with the West. This perception works both ways. Russian nationalists like to see Ukraine as a Western “fifth column” inside Russia’s sphere of influence. It therefore works in Ukraine’s favour that Putin believes Russia is at war along a broad front and that Ukraine is only one part of this.

Russia’s cyber warfare and hack attacks throughout Europe, together with other hybrid hostilities including disinformation operations and support for Far-Right political forces, have succeeded in changing EU attitudes towards Putin and Russia. This has helped to strengthen the conviction in Western capitals that Ukraine’s success is strategically important for the entire Euro-Atlantic community.

There is one problem – Ukraine has yet to convince its Western allies that the country is moving firmly towards national transformation. In other words, doubts remain over whether Ukraine is worth the risk. Both Ukraine and the West share strategic objectives, but Kyiv must demonstrate the political will to follow through on the promises of 2014 if it seeks to maintain the confidence of the country’s international allies. Failure to do so will have grave implications for Ukraine’s national security. At present, Ukraine is falling short in a range of areas including rule of law, anti-corruption measures, and support for economic liberalization. This is the road to “Ukraine fatigue”. It will lead to a repeat of the disillusionment that eventually overcame the post-Orange Revolution government of President Viktor Yushchenko.

Recent developments in Washington DC, including the private meeting Yulia Tymoshenko secured with US President Donald Trump, should send a strong signal to President Poroshenko that time is running out. There is a very real danger the US administration will write Poroshenko off as a one-term president and begin actively seeking political alternatives to the current Ukrainian leadership. If President Poroshenko is unable to overcome this credibility deficit, it could undermine Ukraine’s international alliances and leave the country vulnerable to further Russian escalations. Playing the victim card is no longer sufficient. Ukraine must make itself an attractive ally or risk losing Western support.