FIVE REASONS WHY SUPPORTING UKRAINE IS IN AMERICAN INTERESTS

US President Donald Trump’s Secretary of State Rex Tillerson needs to appreciate that America's long-term international interests would be best served by the continued development of a sovereign, successful and genuinely democratic Ukraine 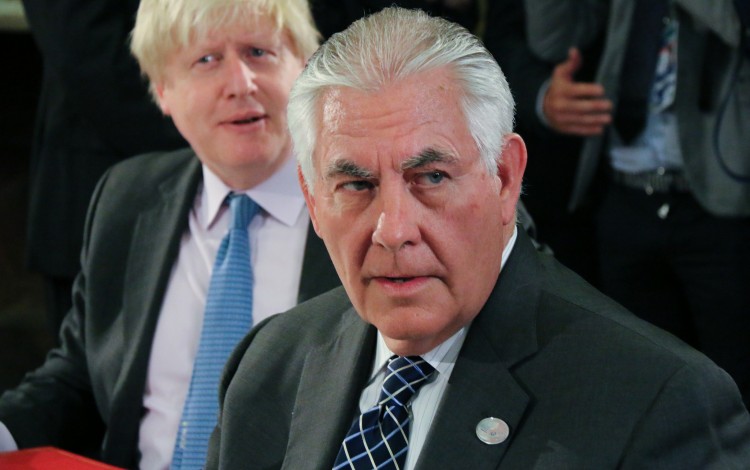 US Secretary of State Rex Tillerson pictured at a recent G7 summit in Italy where he stunned colleagues by asking colleagues, “Why should US taxpayers be interested in Ukraine?”
Institute of World Policy

The new presidential administration in the US is currently shaping its approach towards Ukraine and the Euro-Atlantic region amid a sense of international uncertainty over continued American commitment to traditional aspects of US foreign policy. Given these concerns, it was hardly surprising that US Secretary of State Rex Tillerson sparked alarm when he recently asked his G7 colleagues, “Why should US taxpayers be interested in Ukraine?”

In light of this alarming comment, the Kyiv-based Institute of World Policy invites Secretary Tillerson to consider the following five key reasons why supporting Ukraine is very much in the interests of the United States.

1. A secure Ukraine is crucial for transatlantic ties

Russia’s hybrid war in Ukraine is a blatant violation of the European security order. Russian success in Ukraine would lead directly to the destabilization of the continent. It would also encourage Russia to deploy similar tactics elsewhere in Europe. In such a scenario, the US would find it even more difficult to stay out. If exposed to unchecked Russian aggression, Europe could rapidly become a problem rather than a partner. The US would then find itself having to invest resources to support stability in Europe, rather than enjoying the benefits of united transatlantic actions on geopolitical issues elsewhere.

Lifting sanctions on Russia would also risk increasing the tension in US-European relations, since leading European countries like Germany, Great Britain and France have all firmly rejected any attempt to remove Ukraine-related sanctions imposed on Russia without the full implementation of the Minsk agreements. Europe has defied expectations by maintaining a united front in response to Russian aggression in Ukraine. If the US broke ranks at this point, it would cause huge damage to the transatlantic relationship.

2. Global nuclear non-proliferation is at stake

Abandoning Ukraine would deal a major blow to nuclear nonproliferation efforts - something President Trump himself identified in December 2016 as one of America’s top foreign policy priorities. Under the terms of the 1994 Budapest Memorandum, Ukraine surrendered the world’s third largest nuclear arsenal in exchange for security assurances from the US, UK and Russia, who all committed to respect Ukrainian sovereignty and territorial integrity. Russian aggression against Ukraine, along with the restrained response of the international community, have exposed these assurances as hollow. This sets a dangerous precedent for any nation possessing or seeking to acquire nuclear weapons. It undermines the potency of any future security guarantees, while complicating negotiations with existing nuclear powers on arms reductions. For example, it could make US negotiations with North Korea on the surrender of Pyongyang’s nuclear arsenal far more problematic.

Guaranteed security is a prerequisite for sustainable trade and investment in the transatlantic region. Future European security is unimaginable without a secure Ukraine. If Russia succeeds in invading and annexing Ukrainian territory, no country in the region will feel secure from similar attacks. The entire security apparatus of the post-WWII world will collapse, bringing down all manner of economic relationships.

Supporting Ukrainian democracy is a US foreign policy priority

The considerable material and political support provided by the US to Ukraine since 1991 - especially since the 2014 Revolution of Dignity – makes Ukraine’s domestic reform course a test case for US credibility as a democracy supporter. Abandoning Ukraine would severely undermine US authority around the world, while also writing off a key regional relationship at a critical point in its development.

Over the last three years, Ukrainians have demonstrated their ability to implement fundamental and far-reaching reforms. Since 2014, there has been more progress in overcoming the country’s Soviet inheritance than in the previous two decades of independence. The US has a major role to play in making sure this progress continues. It is also very much in American interests to do so. Ukraine has sufficient resources and potential to become the most significant foreign policy success story of Donald Trump’s presidency. This success could transform the entire post-Soviet region.

Supporting Ukraine is also the most logical and practical US foreign policy response to Russia’s hostile actions. Continued support for Ukraine allows the White House to avoid entering into direct confrontation with the Kremlin, while presenting the opportunity to make a tremendous impact on the security of the region. In contrast, withdrawing support for Ukraine would undermine the momentum of the Ukrainian reform process and create a favorable environment for further Russian advances. Such an outcome would fail to satisfy virtually any interpretation of US foreign policy objectives.

As long as Ukraine is able to maintain its independence from the Kremlin, the Russian Federation will be unable to achieve superpower status comparable to that of the USSR. Instead, it will remain a troublesome but limited regional power. However, if Ukraine falls back under Moscow’s control, the Kremlin will have a platform to project its influence with far greater effectiveness into Central Europe, the Balkans, the Middle East, the Black Sea region, and further afield.

In order to safeguard its independence, Ukraine has little choice but to make a success of its post-Maidan transition towards a more transparent and democratic model of governance. A reformed Ukraine would become a democratic champion in the post-Soviet space, providing a strong counter-argument to Russia’s hybrid interventions while inspiring calls for similar transformations elsewhere in the neighborhood. Supporting Ukraine’s transition is not only strategically smart within the current foreign policy context – it could also bring long-term dividends throughout the post-Soviet region.