NO EUROPE WITHOUT UKRAINE: Full text of Donald Tusk's historic address to the Ukrainian parliament 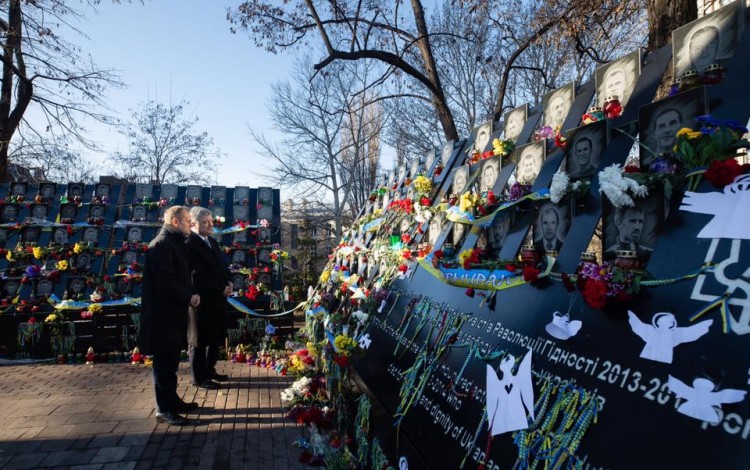 The President of the European Council Donald Tusk delivered an historic address to the Ukrainian parliament on 19 February that placed Ukraine's 2013-14 revolution and subsequent struggle against Russian aggression in a broader European context. In his speech, Tusk said there could be no just Europe without an independent Ukraine and no safe Europe without a safe Ukraine. Below is the full text of Tusk's address translated from the original Ukrainian into English:

I have come to you on the fifth anniversary of the dramatic Maidan events, on the anniversary of the Revolution of Dignity, to thank all Ukrainians and their representatives gathered here, irrespective of party divisions, divergent interests or ideological disputes. I have come here as the President of the European Council, but also as a Pole, your closest neighbour, and a sincere and committed friend.

Firstly, I would like to thank you for your perseverance. You persevered during the most difficult moments in your history, and so you will continue, proud and indomitable, in defiance of geopolitics, in defiance of the malign intentions of an aggressive neighbour, and in defiance of the indifference and hypocrisy of many important actors on the global political stage. You persevered, even though your friends and allies do not always offer you enough assistance. I know this better than most. I also know, from my own and my country's experience, that the feeling of being alone in times of threat is sometimes worse than the enemy's attack. To this day I still remember the words of a poem by Halyna Kruk, written during those dramatic days in February:

'We all, Europe, are so deeply worried,
some of us, actually, to death.
Clear out YouTube more often
so your citizens are not struck by the atrocities here.
Some of our people will never see you with their own eyes.
But your eyesight, Europe, is failing, too, as you refuse to see
their ruined eyes and gunshot wounds.
Some will no longer be able, Europe - don't be angry -
to even reach out a hand to you (unless it's prosthetic!),
to even touch the culture of your past centuries.
Keep watch over your borders, Europe,
so it does not touch you by accident,
listen carefully, in case we are still crying out
as we are pistol-whipped, kicked by military boots and struck by batons.'

But many of us heard your cry and we heard what it meant. We understood. Even if, for some people, it took a long time. And that is why I can stand before you today and say again, not only on my own behalf, but on behalf of the whole of the European Union: we are with you and we want to continue to help you. I can reaffirm the opening words of our Association Agreement: I can reiterate that Europe will never recognise the Russian annexation of Crimea and will not drop the sanctions unless Russia fulfils its commitments. Nor will the EU accept any acts of violence in the Sea of Azov. I will do everything in my power to ensure that the EU remains united in this respect.

Secondly, I would like to thank you for your courage. The 'Heavenly Hundred' have entered the pantheon of not only Ukrainian, but European heroes. And to all the mothers of the fallen, I want to promise you that Europe will remember your children. The lesson in courage that you gave the whole world that February five years ago has changed us all. Ukraine has shown that it is worth being courageous and decent, that good can prevail over evil, that heroism can be something more than merely a show of morals, that it can be the key to victory. You gave to many people around the world, to the humiliated and enslaved, the greatest gift: hope – that for them too, for those who now are weak, that day of victory will come.

The age-old motto of my city, Gdańsk, is 'nec temere, nec timide', boldly and prudently. And so, thirdly, I thank you for your prudence, for the fact that your romanticism turned out to be extremely pragmatic, that your fight for the independence and integrity of Ukraine is not simply heroic resistance to aggression, but also a systematic reform of your country, a well-thought-out economic recovery, reasonable and consistent diplomacy. When necessary, heroes; when necessary, pragmatists with your feet firmly on the ground – that is how the world sees you today.

Fourthly, I would like to thank you for your Europeanness. I will always remember seeing the blue flags with their yellow stars on Khreshchatyk during the revolution, the 'Ode to Joy' playing then in so many places across Ukraine. I often say to my colleagues in Brussels: do not teach them Europe; learn from them what Europe means. Today I would like to repeat to you the words I once said to EU leaders: only those who stand with Ukraine can truly call themselves European.

So thank you again for everything. But as your friend I feel as though I can also give you some advice. God forbid I should preach to you; I know you have had enough of all those wise people who know better than you what Ukraine should look like. After all, no one has the right to tell their hosts how to arrange their home. I understand that and it is not my intention to interfere in your work. But perhaps you will accept my advice, because it is given with a good heart. There are five things I would like to say.

First. Do not argue too much during the upcoming elections. Your history, like my own country's history, shows us that internal conflict within our two countries is the greatest gift we can give that third country. Remember, too, that your enemies in Europe are waiting for any pretext to break the solidarity that exists between Brussels and Kyiv. A bitter conflict amongst yourselves would be such a pretext. So argue in moderation and remain united on those matters that are the most important for Ukraine.

Second: be resolute in rejecting the lure of radical nationalism and populism, as you have done so far. If we allow its resurgence, in Ukraine and in Europe, we will inevitably descend into conflict, and egoism and particularism will ruin our political community. The response to nationalism is almost always just another type of nationalism, and the consequences are easy to predict. The foundations of a united Europe are reconciliation instead of revenge, solidarity instead of self-interest, historical truth instead of propaganda. The dangerous lure of radical populism is born out of insecurities and weakness. But today Ukrainians have a right and reason to feel proud and strong as a nation. Ukraine is too great to need the drug of populism.

Third: do not mimic those neighbours and those European politicians who want to convince us all that democracy based on freedom, human rights, respect for minorities, and freedom of thought and speech is a relic, an old-fashioned state model, and that it is time for authoritarian democracy. What is in the interests of our citizens and of Europe as a whole is the defence of fundamental values. After all, that is also what the heroes of the Revolution of Dignity died for.

My fourth piece of advice: work together to build an honest country. I will not stand here and give a lecture on corruption; you have already shown that you are ready to fight against it. I only ask you all to believe that authority must be honest and transparent, not because that is what the European Union requires, but because it is in the interests of your citizens. Do not hold back from making positive changes, even if for some they may be painful.

My fifth and last piece of advice. Believe in young people. A few days ago I welcomed a group of students to Brussels, among them a number of Ukrainians. They asked me to tell you today that their generation is already prepared to take on the responsibility of Ukraine's future. Because after all, they are the future. Five years ago young Ukrainians passed a test, and some of them paid the ultimate price. If they believe in themselves, today you can believe in them too.