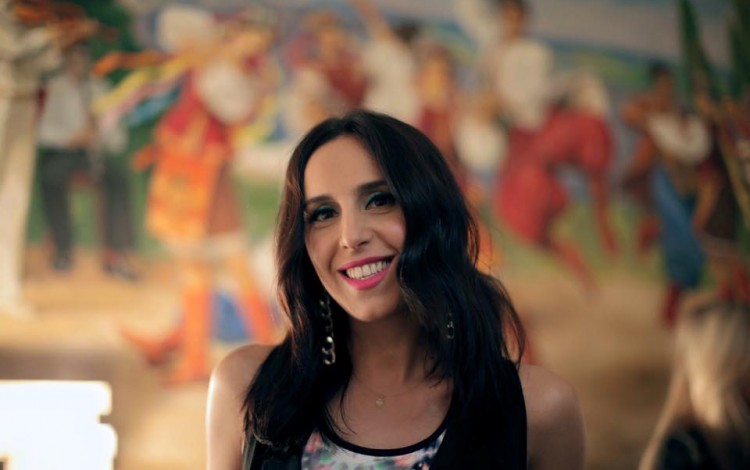 (Facebook image) Can Jamala win Eurovision with her haunting ballad about the Soviet-era deportation of the Crimean Tatars?
Peter Dickinson, Business Ukraine magazine

The Russian occupation of Ukraine’s Crimean peninsula looks set to become one of the talking points of the 2016 Eurovision Song Contest after Ukrainian TV viewers selected Crimean Tatar singer Jamala’s haunting ballad ‘1944’ to represent the country at this year’s event.

A nation of Eurovision connoisseurs

Ukrainians take Eurovision seriously. The annual race to see who will represent the country attracts significant media attention and is the subject of heated debate. Many of the country’s top pop performers compete for the privilege of singing Ukraine’s entry, and they tend go on to do well in the finals. Lviv legend Ruslana famously won Eurovision in 2004 with her ‘Wild Dances’, while drag act Verka Serdyuchka became the most memorable runner-up in the competition’s history with his iconic 2007 eurotrash disco classic ‘Russia Goodbye’.

The 2016 national competition was particularly heavily laden with expectations. The hyper-patriotic Ukrainian response to Russia’s ongoing hybrid war helped amplify the excitement surrounding this year’s selection process, with millions tuning in to the televised semi-finals and final of the 2016 national competition. Jamala eventually won by virtue of overwhelming TV viewer support, claiming the largest share of almost 400,000 individual phone votes.

Her victory will guarantee Ukraine a generous share of the limelight at this year’s Eurovision Song Contest in Sweden. While Eurovision is supposed to be completely apolitical, Jamala’s thinly veiled political anthem will attract considerable attention in the buildup to the contest.

Promoting the new Ukraine and embarrassing the Kremlin

The international media coverage Jamala will attract could well prove a significant PR victory for Ukraine as well as a considerable embarrassment for the Kremlin. As a practicing Muslim and a member of an ethnic minority, Jamala is in many ways the ideal person to represent the multicultural tolerance and inclusiveness of the new Ukraine. She is also the perfect antidote to Kremlin scare stories about marauding Ukrainian Nazi hordes.

From a Russian point of view, she could hardly be less suitable. As well as debunking the myth of fascist Ukraine, Jamala’s presence as Ukraine’s representative at Eurovision 2016 will also serve to remind European audiences that not everyone in Crimea cheered the Russian takeover. The deteriorating plight of the Crimean Tatar community in the occupied peninsula has already become a focus of international concern. The attention Jamala garners will only add to this process.

Her song itself is also an awkward choice for the Kremlin. Vladimir Putin has made the glorification of the Soviet Union’s victory of Nazi Germany one of the cornerstones of his efforts to rebuild Russian national pride in the wake of the 1991 communist collapse. This has necessitated the partial rehabilitation of Stalin. As a result, new monuments to the Soviet dictator are currently popping up across Russia, while his portrait is on prominent public display throughout the puppet republics set up by the Kremlin in east Ukraine. Jamala’s powerful ballad will highlight one of Stalin’s many industrial-scale atrocities – the mass deportation of approximately a quarter of a million Crimean Tatars in 1944. Tens of thousands died during the journey to central Asia and in the harsh early years of exile. Jamala’s family were among the victims, adding extra poignancy to her performance. Relatively few Europeans are fully aware of the Soviet Union’s crimes against humanity, but Jamala’s song may lead to greater interest in the subject. At the very least, it will introduce a new generation of viewers to the idea that Hitler was not the only genocidal maniac terrorizing Europe in the 1940s.

Can Jamala’s historically pregnant and geopolitically loaded tune actually win the 2016 Eurovision Song Contest? Critics have argued that it is entirely the wrong fit for a competition better known for its kitsch glamor and bubblegum pop. This assessment may well prove to be true, but as columnists across the continent look for material to fill their Eurovision 2016 previews, Ukraine’s Crimean Tatar entry is likely to be a particularly popular theme. This will be a victory in itself, raising Ukraine’s international profile and reflecting the country’s diversity while highlighting the horrors of Putin’s hybrid war.