CAN UKRAINE LIVE UP TO EUROMAIDAN PROMISE? 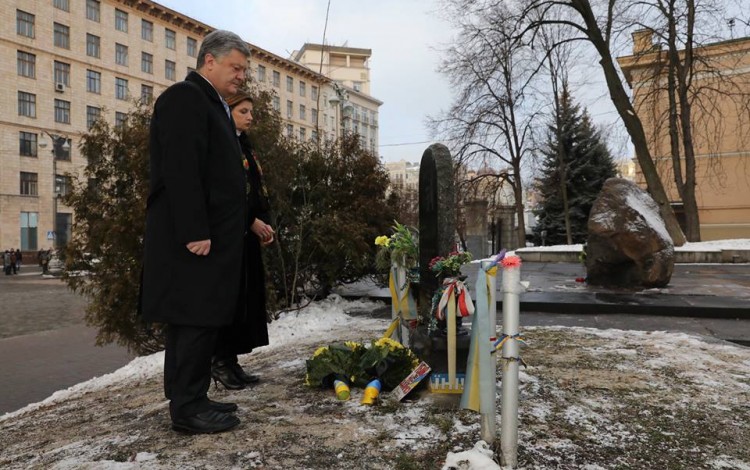 President Poroshenko pays his respects in late January 2017 at a monument to one of the first protesters killed during Ukraine’s Euromaidan Revolution (Photo: Facebook)
Taras Kuzio

Ukrainian President Petro Poroshenko raised a number of key issues in late January that served to highlight the difficulties he will face over the coming year as he seeks to bridge the growing credibility gap between his public pronouncements and the policies of his administration.

President Poroshenko began the year by reiterating his support for the Minsk accords, which he continues to portray as the only option for the settlement of the conflict in east Ukraine. This is in line with the international consensus, but growing numbers in Ukraine are now asking how long the current “neither war nor peace” status quo can continue while hundreds of Ukrainian soldiers are dying each year.

Many in Ukraine regard the West as duplicitous in claiming they cannot send military assistance to Ukraine to defend itself while they are waiting for the Minsk accords to be fulfilled. Between Minsk 1 and Minsk 2, Russian President Vladimir Putin built a hybrid army of around 40,000 in the separatist enclaves of eastern Ukraine – a larger fighting force than many NATO member states possess. In continuing to support Minsk, Poroshenko risks accusations of playing along with the West’s duplicitousness.

Many of the Ukrainian soldiers on the frontline hate the current “neither war nor peace” situation because it makes them sitting ducks for the Russians, who flout the terms of Minsk on a daily basis. One Ukrainian soldier told me Kyiv should either order an advance to recapture the occupied regions of the Donbas or accept that the current line of contact is the new eastern border of Ukraine.

President Poroshenko also started 2017 by honouring the casualties of the Donbas War. Such gestures are obligatory for Ukraine’s leader but they are becoming increasingly problematic because nobody has faced justice for the hundreds of Ukrainian casualties due to military blunders committed during notorious engagements like the Battles of Ilovaysk and Debaltseve. If hundreds of British or Canadian soldiers had died because of military incompetence (or worse still, treason), the prime minister in either of those countries would have had to resign. The generals who were responsible would run the risk of criminal charges. Before people take Poroshenko’s efforts to honour the country’s war dead seriously, there needs to be accountability for the conduct of the war. Instead, there is no justice for military blunders.

There is also mounting concern over accusations of insufficient support from the state for those tasked with holding the line in eastern Ukraine. I have seen for myself how frontline soldiers continue to rely on 30-year old Soviet ambulances. These vehicles provide none of emergency medical facilities vital for saving lives. The lack of ambulances and medical facilities in the conflict zone was confirmed to me by a doctor I met from western Ukraine (she is affectionately called “Pani Stepanivna” by the troops themselves), who came out of retirement to volunteer her medical expertise. “Pani Stepanivna” claimed money provided by the Ministry of Defence for ambulances was stolen and used to buy luxury cars in Germany. While I was not able to confirm these claims, they are commonplace among those who operate in and around the conflict zone.

As the conflict drags on, Poroshenko must explain to the war weary population why volunteers continue to play such an important role in evacuating the wounded – often using their own cars and other makeshift transportation to do so. The volunteer movement saved Ukraine from collapse in 2014. This was a source of enormous national pride at the time, but such sentiments are now giving way to anger. Many of the medical volunteers say they have never seen any new ambulances. One soldier told Radio Liberty recently that available military ambulances are “very old and crap”, whereas “what the volunteers have given us is much better”.

The third key issue raised by President Poroshenko in January 2017 was the tragedy of the Heavenly Hundred – the protesters killed during Ukraine’s Euromaidan Revolution. The Ukrainian head of state paid his respects to the dead on the third anniversary of the initial killings, but the lack of justice over these murders increasingly hangs over his presidency. As Ukraine approaches the three-year mark since the flight of Yanukovych, the absence of convictions for the murder of so many Ukrainian protesters forms an increasingly ugly stain on Poroshenko’s record.

There have been no criminal convictions. Instead, many of the chief suspects have been able to flee to Russia. Others have used house arrest in order to go into hiding. A succession of presidential picks for the post of Prosecutor General have been unable to secure justice, with each successive holder of the position accused of betraying the dead of the Euromaidan Revolution. Meanwhile, senior members of the Yanukovych administration’s inner circle have similarly escaped prosecution. In many cases, they are free to profit from positions secured prior to the revolution. Insider privatisation deals and highly suspicious government contracts from the Yanukovych era remain in place. There is simply no evidence of the political will to go after these well-known figures.

All these issues have the potential to make life uncomfortable for President Poroshenko in 2017. With discontent over the economy and anger over the government’s handling of the hybrid war with Russia threatening to boil over, the Ukrainian leader is under pressure to produce tangible results. Since taking on the presidency in 2014, Poroshenko has repeatedly shown himself capable of statesmanlike demonstrations of respect for the country’s Euromaidan victims and fallen soldiers. However, the Ukrainian public appears to be growing tired of what many regard as little more than empty gestures. They want to see members of the Yanukovych regime on trial, along with corrupt members of the military top brass responsible for tactical errors and supply shortcomings. Such prosecutions would be important signals to Ukrainian and international audiences that President Poroshenko is capable of leading the country away from the Soviet past and fulfilling the goals of the Euromaidan Revolution. Until that happens, the Ukrainian leader is likely to find himself struggling against a growing credibility gap.