POST-SOVIET TURNING POINT: Is it time to reconsider the historic importance of Ukraine’s 2004 Orange Revolution?

Ukraine’s 2004 Orange Revolution caught the world’s imagination but failed to deliver politically. However, it is now increasingly clear the protests played a decisive role in changing the geopolitical dynamic of the entire post-Soviet region 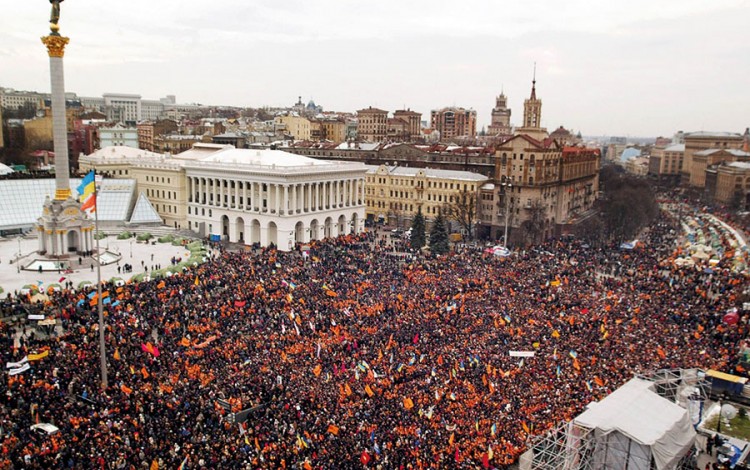 Orange Ocean: millions took to the streets of Kyiv in November and December 2004 to protest a president ballot rigged in favour of a pro-Kremlin candidate. The protests sparked the first post-Soviet confrontation between Russia and the West
Peter Dickinson, Business Ukraine magazine

It has long been accepted wisdom that Ukraine’s 2004 Orange Revolution was a failure. However, the passage of time is rendering this verdict less and less convincing. While the immediate political objectives of the revolution were destined to go almost completely unfulfilled (the popular revolutionary slogan “bandits to jail” springs to mind), the broader impact of the uprising may have been underestimated. Indeed, when viewed from the perspective of the current global confrontation with Putin’s Russia, it becomes clear that the Orange Revolution marked a turning point in the entire post-Soviet era.

From a Russian point of view, the Orange Revolution was a watershed moment that convinced Moscow of the need to adopt a confrontational stance towards the West. Russia was completely unprepared for the scale of the Ukrainian protests when they erupted in November 2004. There was widespread fury and disbelief at the West’s readiness to support the demands of the protesters. The response was to accuse the Western world of collectively manufacturing the entire uprising.

This paranoid response has come to define relations between Russia and the West. Even today, the Orange Revolution continues to haunt the collective consciousness of the Kremlin. The lingering popularity among Russia’s ruling classes of the term “colour revolution” reflects the historic importance they still attach to Ukraine’s uprising, seeing it as the definitive symbol of post-Cold War Western perfidy.

Up until the Orange Revolution, Vladimir Putin had attempted to portray himself as a reliable partner and ally of the democratic world. The revolution in Ukraine changed all that, casting him in the role of pantomime villain for the first time. Putin’s hubristic visit to Kyiv on the eve of Ukraine’s autumn 2004 presidential election helped ignite the revolution and lent a personal aspect to Russia’s humiliation that changed his entire worldview. It fostered a sense of resentment and betrayal that has poisoned Russia’s relations with the Western world ever since.

Russia’s reactionary response to the events of winter 2004 set the country firmly on the path towards the nationalistic authoritarianism of today. In the aftermath of the Orange Revolution, Putin launched a far-reaching crackdown on Russian civil society and other “foreign agents”. The Kremlin established patriotic pro-Putin youth groups to prevent young Russians from copying the pro-democracy students of Ukraine.

In a defiant response to the orange ribbons of Maidan, Russians were soon being encouraged to wear orange and black St. George’s ribbons symbolizing pride in the Red Army’s defeat of Nazism. A decade later, these ribbons would become key symbols in the Russian hybrid war against Ukraine. Throughout the Russian media, Westerners replaced Chechens and Islamic fundamentalists as the Kremlin’s enemies of choice, while the blame for Ukraine’s rejection of a Russian reunion was placed solely on “fascists” and “Russophobic extremists”.

Russia’s current information warfare capabilities also have their roots in Moscow’s response to the Orange Revolution. Ukraine’s 2004 revolution received overwhelmingly positive international media coverage, with sympathetic reports doing much to bolster global support for the Ukrainian protest movement while demonizing the Kremlin and its local proxies. This setback convinced the Kremlin of the need to launch its own global information offensive. Russia Today began broadcasting in December 2005 – less than a year after the Orange Revolution. The channel soon became a platform for anti-Western opinion, reflecting the adversarial approach to relations adopted by Russia in the post-Orange Revolution environment. Although nobody knew it at the time, the road lay open to the hybrid war that would erupt ten years later.

A New Chapter for Ukraine

Closer to home, the Orange Revolution changed Ukrainian society in a number of far-reaching ways. Prior to the 2004 protests, the Ukrainian state had exerted a high degree of direct control over the country’s media. The rejection of this state censorship was one of the great transformations brought about by the Orange Revolution. During the first week of protests, a host of national TV channels publicly rebelled against government propaganda and rejected further attempts to censor news coverage. Ukraine’s media has remained relatively free from government censorship ever since. Even four years of President Yanukovych proved insufficient to put the genie back into the bottle. Today’s Ukraine boasts an imperfect and often deeply corrupt media landscape, but it nevertheless stands out among its post-Soviet peers due to the absence of direct state control.

The impact of the protests on attitudes towards Ukrainian identity was also profound. As the first genuinely historic event to take place in the country since the dawn of the post-independence era, the Orange Revolution helped to erode perceptions of Ukraine as part of the Russian world. Until 2004, many in Ukraine remained trapped in a Soviet mindset that inextricably linked the country’s future fate to that of the Russian Federation. The Orange Revolution shattered these illusions, encouraging millions of Ukrainians to regard their country as an independent geopolitical player for the first time.

After 2004, Ukrainians began to view domestic politics in a different light. The revolution inspired a new generation of politicians and provided a huge boost to civil society. Many of the country’s current reformist MPs underwent their political baptism as activists and journalists during the Orange Revolution. Throughout Ukraine, the fatalistic passivity of the early post-Soviet years gave way to a culture of engagement that survived the political disappointments of the subsequent years and helped make the Euromaidan Revolution possible. Likewise, the miraculous volunteerism that saved Ukraine in 2014 would have been inconceivable without the earlier impulse provided by the Orange Revolution.

The enduring importance of events is not always immediately apparent, but the developments of the past three years underline the historical significance of Ukraine’s winter 2004 people power protests. If the Euromaidan Revolution represents the rebirth of the Ukrainian nation, then the Orange Revolution was the moment of conception. It may not have achieved its immediate goals, but Ukraine’s first post-Soviet revolution succeeded in changing the entire geopolitical landscape of Eastern Europe and transforming the way Ukrainians viewed themselves. It is deserving of a far more prominent place in regional history.