Poster girl for the new Ukraine?

Yulia Marushevska shot to fame as the star of a viral video during Ukraine's Euromaidan Revolution. She has since risen to national prominence as a key member of Mikheil Saakashvili's reformist team in the Odesa. Can she now succeed in cleaning up Europe's most corrupt port? 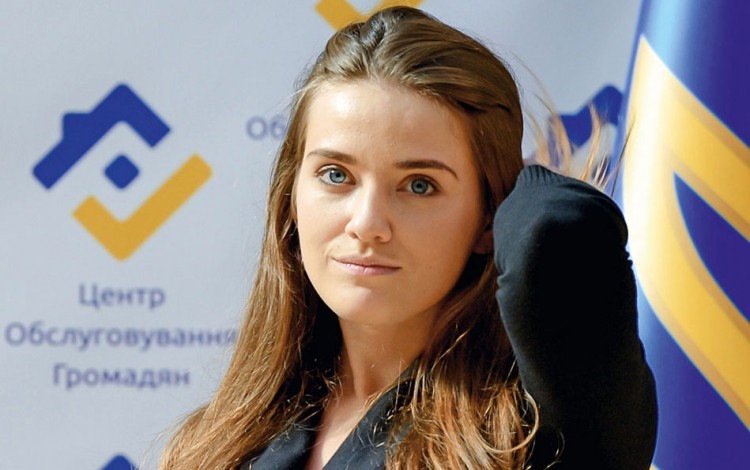 Mikheil Saakashvili has rarely been out of the headlines since his appointment as Odesa Governor in mid-2015. The crusading Georgian reformer has made it his mission to transform the Odesa region into a model for the new Ukraine and a laboratory for the changes that will allow the country to transition from the post-Soviet to the European development track. He has employed all manner of eye-catching tactics to draw attention to his reformist drive, but none has raised more eyebrows than the appointment of untested 26-year-old Yulia Marushevska as the new head of the Odesa Port Customs Service.

Unveiled as the city’s new customs chief in mid-October, Ms. Marushevska had previously spent some months on the Saakashvili team as Deputy Head of the Odesa Regional Administration. Her appointment as customs chief met with a considerable amount of disbelieve, sparking lively debate over her suitability for the role. Inevitably, Ms. Marushevska’s lack of experience in the field of customs clearance has been a key focus of this debate, as has her relatively tender age. Some have accused Odesa’s Georgian Governor of seeking to use her as a front to gain direct personal control of the port customs service. Others have called the appointment a PR stunt that owes more to Ms. Marushevska’s photogenic appearance and English-language skills than her credentials to take on the task of cleaning up what many believe is Europe’s most corrupt port.

Such criticisms run the risk of significantly underestimating Yulia Marushevska and the strength of her personal ambition. Originally from southern Ukraine, Ms. Marushevska was educated at Kyiv National University and at America’s Stanford University before shooting to overnight prominence during Ukraine’s Euromaidan Revolution as the star of a viral protest video entitled ‘I am a Ukrainian’. This simple but powerful video featured Ms. Marushevska speaking to the camera from the front lines of the Euromaidan protest movement in downtown Kyiv and explaining, in disarmingly simple terms, what the protestors were hoping to achieve.

The video proved a massive online hit, attracting millions of views and widespread praise from around the world, while also earning the backhanded compliment of a Russian smear campaign that branded it the work of the US State Department. Ms. Marushevska has since explained that she was motivated to make the video by a sense of frustration at the widespread ignorance about Ukraine among international audiences, and the failure of many outside the country to understand what was driving the Euromaidan protests.

Following the success of her ‘I am a Ukrainian’ video, Ms. Marushevska found herself very much in demand and began making public appearances across the world as a representative of the ‘new Ukraine’. She proved herself to be a media savvy and engaging spokesperson capable of articulating the complex issues at stake in the Euromaidan Revolution and the aspirations underpinning visions of a ‘new Ukraine.’

Ms. Marushevska’s obvious poise and confidence in front of the cameras led many to predict a future political career, but there was nevertheless a sense of shock when Governor Saakashvili appointed her as one of his Odesa deputies in summer 2015. This surprise was perhaps misplaced – Mr. Saakashvili himself became a Georgian MP while still in his 20s, and was once Europe’s youngest elected head of state. He is someone who believes in giving young talent a chance to blossom, having achieved impressive results in his native Georgia by replacing older members of the political establishment with young and untried but untainted reformers. In this sense, Ms. Marushevska is a typical Saakashvili pick: a young and highly educated political novice complete with brimming self-confidence, English-language skills and Western mindset.

Governor Saakashvili has defended the appointment of Ms. Marushevska as Odesa Port Customs Service chief by calling her lack of experience ‘an advantage’. He has the support of President Poroshenko, who has praised Ms. Marushevska as a ‘talented woman’ with ‘very good organizational skills’. Crucially, this south Ukrainian native has no connections to the corruption that has long been the defining feature of Odesa Port, and will be able to approach her task as a relative outsider who enjoys the advantages of local knowledge.

She takes over at Odesa Port as the city prepares to introduce new digitalized customs procedures designed to speed up the customs clearance process while cutting out corruption. If these new measures are successful, Ms. Marushevska will benefit from considerable kudos, while her many detractors will be temporarily silenced. However, if implementation of the new customs system does not go smoothly, she may find herself singled out as a target by opponents of Governor Saakashvili’s entire reformist agenda. Business Ukraine magazine spoke to Ms. Marushevska about her meteoric rise to prominence, and asked whether she felt intimidated or inspired by all the criticism surrounding her appointment.

Your appointment has been greeted with a degree of disbelief due to your young age and lack of relevant experience in the customs service. What is your response to these criticisms?

People with experience made Ukraine the poorest country in the region. Under professional people with plenty of experience, Odesa regional customs became the worst, most corrupt in Europe. In my new position, I am essentially a crisis manager. My job is not to process the cargo coming into the port, but to implement reforms, to change practices and motivate people. CEOs of large corporations often do not know how to manufacture their company’s products, but they know how to motivate people. Governor Saakashvili sees me as someone who can do that. I had an interesting and thorough immersion in this process while working in the regional administration as Deputy Governor. This is a continuation of that work in a different, somewhat more focused, application.

Odesa Port is widely seen as one of the most corrupt in Europe. What are your priorities as you seek to combat this deeply entrenched corruption?

I intend to change procedures and push for changes in legislation, since corruption in the port is systemic in nature. The existing corruption in the system has not developed by accident. It is a direct result of the system itself. I want to simplify the procedures and make them transparent. I aim to create new customs procedures and practices that make clear how the new system is working. Customs must be a comfortable, predictable and easily understood service for business, not a barrier to business. This changeover will include reducing the size of our operation, creating new customs zones and making the customs service overall more efficient.

Odesa Port has the potential to become a major point of entry for Asian goods entering European markets. How do you plan to support this process?

By simplifying the customs process, we will create the necessary steps and proper strategies to attract greater Asian and European trade to Odesa Port. My task is to create an even playing field for all who wish to utilise our customs system. It is important that customs become transparent and predictable according to clear and equal rules for every market participant.

You have spoken about engaging the support of the international community in your Odesa Port reform efforts. Can you shed a little more light on these plans?

We intend to implement the very best world practices, to engage professional Ukrainian and International expertise, and to modify these best practices to meet with contemporary Ukrainian necessities and realities. At present, we are cooperating with USAID. They support us in the technical area and are helping to provide training for customs service personnel. I will work to attract and engage more international support.

Odesa Port is regarded by many as a symbol of the widespread alliances in today’s Ukraine between organised crime and corrupt state structures. In your new role at the port you will be entering into direct confrontation with these powerful forces. Are you concerned for your personal safety?

I am aware of the risks but this is a critical aspect of the broader Ukrainian reform drive and the job must be done. I took on this job in order to implement the necessary reforms and I understand that no quantity of bodyguards will stop determined criminals. This is why I am focusing on doing my job. Many courageous people on the front lines in east Ukraine are risking their lives and sacrificing much more than I am in Odesa. My battlefield is reforms.

Many commentators have argued that the only hope for reform in Ukraine is to completely replace existing personnel at a wide range of state services. How big an overhaul do you envisage at the Odesa Port Customs Service?

First of all, I must emphasize that reforms are not only about changing or replacing people. If regular customs officers have salaries of just UAH 1300 per month, they will be very susceptible to corruption. Unless these circumstances change, it really does not matter who you replace them with. Soon enough, you will probably find that the new officer is corrupt as well. The procedures must be simplified and automated to minimise the possibility of corruption. Of course, if there is direct evidence of corruption, the person involved will be fired. We share the philosophy of zero tolerance towards corruption. The rules have changed and if someone cannot abide by the new standards then that is considered grounds for dismissal.

Your rise to national prominence in Ukraine has been extremely rapid. Did you have any reservations about joining Governor Saakashvili’s team in such a senior position?

No, I didn’t have any doubts because I saw Governor Saakashvili and his team as a group of people that really want to change the country. That is the most important thing for me. The fact that he now believes I can do the Odesa Customs Service job is a great honour for me. I will do my best to live up to these expectations. I am proud to accept this challenge and to serve my country.

You have become a symbol of the new generation of young Ukrainians seeking to build what would essentially be a new country. How do you cope with the weight of expectation that this status brings?

It encourages me and brings me great hope. It challenges me to work harder so that the new generation of Ukrainians will succeed. I think the situation we are facing now is actually an amazing opportunity for all of us. While other countries were established a long time ago, we are in a great position in that we can model our country as we want.