Crimean invasion anniversary: many of the myths that accompanied the Russian army's Crimean takeover continue to linger two years after Vladimir Putin first unleashed his doctrine of hybrid war on the unsuspecting outside world 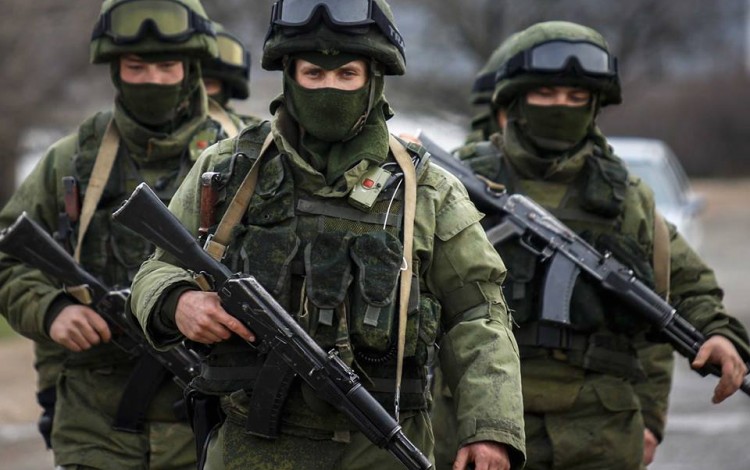 The 2014 Russian takeover of Crimea was one of those rare moments in world history when the entire international community appeared completely unprepared. With the benefit of hindsight, most analysts now regard the Kremlin’s Crimean gambit as the biggest geopolitical watershed since the fall of the Berlin Wall – a game-changing event which marked the end of the post-WWII European security system and the dawn of a dangerous new age.

However, when the Russian invasion first unfolded in February and March 2014, international politicians and journalists alike seemed unsure of exactly how to respond. This confusion was a direct result of the Kremlin’s hybrid war tactics, which brilliantly achieved their goal of muddying the waters and casting a shadow of ambiguity over the entire Russian operation.

Information attacks played a key role in Moscow’s hybrid Crimean offensive, creating a virtual reality information environment where the Kremlin’s positions appeared both rational and justified. This tactic benefitted from the widespread belief among international audiences that the truth always lies somewhere in-between the opposing sides of every story. It enjoyed an additional boost thanks to post-Iraq skepticism towards the mainstream Western media. The result was a stunningly successful information offensive that highlighted the potential security threat posed by the Kremlin media machine.

Even today, two years after the Russian takeover, many of the myths underpinning the Kremlin’s Crimean invasion continue to enjoy considerable levels of international acceptance. This represents a major ongoing security threat. Understanding the nature of the Russian information offensive in Crimea is crucial if the international community is to defend itself against similar future attacks. The Kremlin has already redeployed the disinformation tactics honed in Ukraine in both Syria and Germany. Further attacks are surely just a matter of time.

As the world reflects on the second anniversary of this landmark Russian operation, Business Ukraine magazine examines five of the key narratives used by the Kremlin to justify the audacious and unprecedented annexation of Crimea.

The takeover of Crimea began with the seizure of the Crimean Parliament in Simferopol by masked men in military fatigues. Similar groups soon appeared at government buildings, airports and other key infrastructure points throughout Crimea as it became clear that a major military operation was underway. These mysterious men wore no insignia and denied being Russian troops, despite operating in an obviously military manner and, in many cases, possessing the latest in Russian Special Forces equipment. The Kremlin backed up these denials, claiming the troops were merely volunteer defense forces drawn from the local community. To Ukrainian audiences and observers on the ground in Crimea, such claims seemed patently absurd. Nevertheless, the international media repeated these Russian denials verbatim, establishing a pattern of ‘he said, she said’ reporting on the Ukraine crisis that was to have disastrous consequences for the country.

The so-called ‘little green men’ became symbols of Putin’s new form of warfare, providing the Kremlin with both a strong physical presence and plausible deniability. By lying about the involvement of the Russian military, Moscow was able to depict events in Crimea as an act of self-determination on the part of the local population. Few where genuinely fooled, but the absence of clarity served to neuter the initial international response.

In the aftermath of Crimea’s annexation, Vladimir Putin soon felt safe enough to dispense with this charade. In spring 2014, he admitted Russian troops had played a secondary role in the takeover. By the time of the first anniversary in 2015, he was bragging of his role in the military takeover of the peninsula and claiming to have personally given the order to begin the operation on the same night President Yanukovych fled Ukraine. This was completely at odds with the narrative put forward at the time of the takeover, but by then it was already too late.

The most potent argument in favor of the Kremlin’s Crimean takeover has been the idea that the Black Sea peninsula is historically part of Russia. This argument has proved surprisingly popular internationally, where it has been accepted at face value by a range of politicians, analysts and correspondents. While they may disapprove of Russia’s heavy-handed approach and the Kremlin’s disregard for international law, they point out that the separation of Crimea from Russia was unnatural and unsustainable. In this sense, the myth of Crimea’s Russian roots has undoubtedly helped make the annexation appear more palatable to outside audiences. It has conveniently ignored Crimea’s long and complex past, while providing an act of naked military aggression with a veneer of historical justice.

In reality, Russian colonization of Crimea is a relatively modern phenomenon dating back to the end of the eighteenth century. Prior to the arrival of Russian imperial troops, Crimea had spent far longer periods under Ottoman, Crimean Tatar and Byzantine rule. Since the 1950s, it has been part of Ukraine. The Russian role in Crimean history is certainly significant, but Moscow has no exclusive claims to a region that has always been one of the great cultural crossroads of Eastern Europe.

Ever since WWII, Kremlin propagandists have been prone to seeing fascists everywhere. The Soviets liked to label any national resistance groups within the USSR as fascists, and even referred to the Berlin Wall as the ‘Anti-Fascist Protective Barrier’. This tradition has continued in today’s Russian Federation, with the modern-day Kremlin identifying fascists everywhere from Lithuania and Estonia to Syria and Georgia.

Anyone from the old Soviet empire who seeks to break away from the Russian orbit can expect to receive the fascist label. This fascist fixation is rooted in the deep trauma created by the deaths of over 20 million Soviet citizens in the war with Nazi Germany. The Red Army victory in WWII became the holy of holies for the Soviet Union, taking on quasi-religious qualities and serving to justify all the horrors of the Stalin era. This approach has been coopted by the Putin regime, which has actively sought to portray the WWII triumph as a Russian achievement. Part of this process has been to position all modern-day opponents of Russia as the ideological heirs to the Nazis.

Russia’s response to Ukraine’s Euromaidan protests reflected this approach. Despite the participation of hundreds of thousands of ordinary Ukrainians in the protests, the Kremlin chose to highlight the role of marginal nationalist and far-right groups. This set the tone for the information attacks that followed the fall of the Yanukovych government. Russian media and Kremlin spokespersons claimed a ‘fascist coup’ had taken place in Ukraine and used this alleged fascist threat to justify Russian intervention in Crimea.

Fake reports appeared on Kremlin TV claiming to show Ukrainian fascist violence in Crimea but in reality featuring footage from earlier Kyiv clashes. Crimeans where informed that legions of Ukrainian fascists were on their way to Crimea to carry out unspecified atrocities. Hysteria reached such a degree that few noticed the absence of any actual fascists.

In reality, the key opposition to Russia’s Crimean takeover came from the Crimeans themselves – from Crimean Tatars, ethnic Ukrainians and Russians who saw their future as part of a democratic, European country. There was no evidence of any attempt to ‘Ukrainianize’ Crimea, but this did not stop Russia from using the phantom fascist threat as a smokescreen for the annexation of Crimea.

Myth 4: The Crimean Referendum was Free and Fair

The referendum vote of March 2014 is the defining event of the Russian takeover. According to the official Kremlin narrative, it was a free and fair vote that demonstrated the overwhelming desire of the Crimean people to return to Russian rule. Russian accounts of the referendum claim a voter turnout of over 80%, with 96% voting in favor of the Russian annexation. While many outside observers have questioned the credibility of these figures, there has also been widespread acceptance that a broad majority of Crimeans did indeed vote for Russian reunion. Such attitudes have been particularly prevalent in the international media, with reports routinely positioning the Crimean referendum as an unorthodox but overwhelming demonstration of public support for reunion with Russia. This tacit acceptance of the Kremlin’s Crimean referendum risks encouraging further breaches of international law and ignores the ample evidence refuting Russian claims of a free and fair ballot.

The Russian referendum suffers from a range of fundamental flaws undermining its credibility.

Despite Russian treaty obligations to respect Ukraine’s territorial integrity, the referendum was a clear and direct breach of the Ukrainian constitution, which states that votes on succession must be nationwide and cannot be limited to a single region.

Internationally recognized election observation groups such as the OSCE did not monitor the referendum, while OSCE observers where repeatedly barred from entering the peninsula. Instead, the Kremlin invited an odd assortment of far-right and far-left European parliamentarians to Crimea to create a fig leaf of international respectability for the vote.

Most importantly, the referendum took place with Russian occupation troops and pro-Kremlin paramilitaries stationed throughout the peninsula. Any vote taking place under the barrel of a gun is invalid by any international standards. The Crimean referendum was a classic example of such a shotgun vote.

The global diplomatic community has acknowledged the invalidity of the referendum, with a post-referendum UN vote producing overwhelming support for Ukraine’s territorial integrity. Only a handful of countries have recognized the ballot as valid.

These criticisms do not mean that a pro-Russian vote in Crimea was implausible. On the contrary, most independent observers, both before and after the annexation, have drawn the conclusion that a majority of Crimeans leaned towards Russian reunion. Nevertheless, the referendum was a flagrant violation of international law that has made it impossible for the international community to accept the official Kremlin outcome of the vote.

In the wake of the Russian takeover of Crimea, a flurry of stories appeared claiming that the Kremlin had thwarted American plans to establish NATO naval bases in Crimea. This was part of the broader Russian narrative depicting Kremlin actions in the former Soviet Union as defensive moves in response to aggressive Western policies of containment and encirclement.

There is no actual evidence of US plans to deploy warships to Crimea. Nor is there any obvious strategic sense in them doing so. NATO member states Turkey, Romania and Bulgaria all offer the alliance the option of establishing Black Sea port bases. Crimea provides a potential platform to launch attacks against Russia itself, but NATO member Baltic States already offer similar launch pads for any such theoretical anti-Russian offensives.

The only plausible reason to develop NATO bases in Crimea would be in order to deprive Russia of access to the peninsula. However, before this to happen, Ukraine would have had to go through a long are challenging NATO membership process that would last for years if not decades. In other words, NATO had little practical reason to seek Crimean naval bases, while any moves in that direction would have necessarily been gradual and long-term undertakings.

The Russian narrative of NATO encirclement is a central pillar of the Putin regime’s security doctrine. It presupposes an expansionist and aggressive NATO alliance. In reality, NATO growth since the end of the Cold War has come at the initiative of new member states in Central and Eastern Europe. These candidate nations have been motivated to seek NATO membership by concerns over possible future Russian military aggression. In other words, so-called Russian ‘encirclement’ is largely due to fear of Russia.

Nor is Russia ‘encircled’ - approximately 95% of Russia does not border NATO member states.

Russian objections to post-1991 NATO growth are essentially attempts to maintain Moscow’s freedom of action in the so-called ‘near abroad’ – the nations of the former USSR that Russia continues to view as lying within its exclusive sphere of influence.