Once one of Putin’s key hybrid war objectives, the capital of east Ukraine survived the Kremlin’s insurgency attempts and is now learning to live without Russia 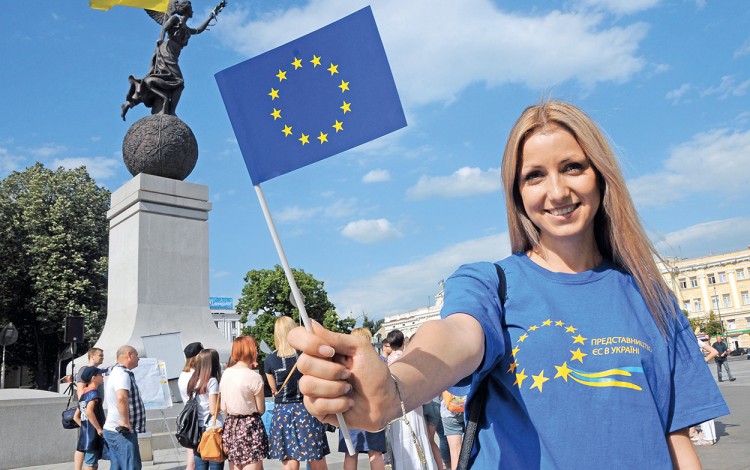 Ukrainian supporters of EU integration rally in downtown Kharkiv: the capital of East Ukraine was seen as crucial to the Kremlin's hybrid war offensive but Russia was unable to take over the city in spring 2014 (Photo: UNIAN)
Peter Dickinson, Business Ukraine magazine

When the first signs of Russian hybrid war began to appear across eastern and southern Ukraine in the early spring of 2014, few observers expected Kharkiv to remain in Ukrainian hands for long. This pessimism was rooted in recent experience. Throughout the preceding months of mass protests against the authoritarian rule of Viktor Yanukovych, the city had acted as the center of the “anti-Euromaidan” movement. It had provided many of the notorious “titushki” thugs who served as street muscle for the regime. When President Yanukovych’s inner circle finally deserted him in late February 2014, he fled Kyiv for Kharkiv before finally escaping to Russia. At the time, the route of his retreat seemed entirely logical. Kharkiv was a city closely associated with pro-Russian sentiment. It was regarded as a place where Soviet nostalgia trumped sympathy for the revolutionary mood sweeping the country. No other Ukrainian city outside of Crimea looked to be quite as firmly rooted in the “Russian World”.

From Moscow’s point of view, Kharkiv was also by far the most important city of the future “Novorossia” or “New Russia” - the new client state the Kremlin hoped to create from the wreckage of a partitioned Ukraine. As well as being the largest city in eastern Ukraine, Kharkiv also contained the region’s most important industries. Crucially, it commanded vital lines of communication that would open up the road to Dnipropetrovsk, Donetsk and Kyiv itself. Controlling Kharkiv was an essential prerequisite if Vladimir Putin was to realize his ambitious plans for a new empire in mainland Ukraine. Quite simply, without Kharkiv there could be no Novorossia.

Throughout March and early April 2014, things seemed to be going very much according to the Kremlin playbook. With the Russian border lying just a few dozen miles away, Moscow was able to bus thousands of Russian citizens into Kharkiv to bolster already significant crowds protesting against the revolutionary events in Kyiv. Despite numerous fiascos (at one point, bussed in Russians attempted to storm a Kharkiv theatre after mistaking it for a government building) this imported contingent gave Russia an unassailable street-level advantage. Kharkiv’s sizable pro-Ukrainian movement was soon physically overwhelmed and found itself literally beaten back.

There was a sense of unrestrained rage about the ensuing violence that seemed driven by an atavistic need to humiliate and punish Kharkiv’s pro-Ukrainian activists. The Ukrainian patriotic wave unleashed by the Euromaidan Revolution had driven many Russians on both sides of the border into a state of impotent rage. Now it was finally payback time, and they were fighting on what they considered home turf.

Central Kharkiv is perhaps the definitive surviving monument to early Stalinist monumental architecture. It is a district of colossal structures and sweeping cobbled boulevards that fan out from what is one of Europe’s largest squares. This downtown square is so vast that rival groups had been able to coexist peacefully throughout the months of the Euromaidan protests without clashing. However, the entire dynamic of the street protests had now changed dramatically, and confrontation was suddenly top of the menu. In scenes that sent shockwaves through the rest of Ukraine, Russian flag-waving and bat-wielding mobs forced bloodied Ukrainian protesters - mostly college-age boys and girls - to crawl on their hands and knees along improvised “corridors of shame” while begging forgiveness, as if their desire for a European future was a betrayal of the city’s Soviet inheritance and Russian associations.

By early April, the Kharkiv regional administration building had been stormed and occupied. Declarations appeared heralding the foundation of the so-called Kharkiv People’s Republic. The Kremlin, despite officially denying any involvement in the unrest, warned Ukraine not to use force to oppose the takeover. Meanwhile, Russian troops massed along the nearby border. The takeover of Kharkiv looked set to become a master class in the art of hybrid warfare.

Just when it appeared that Kharkiv was slipping out of Ukraine’s grasp, the entire separatist movement came crashing down with a suddenness that took everybody by surprise. A well-executed 8 April raid by the Ukrainian security forces succeeded in liberating the occupied regional administration building, leading to dozens of arrests that decapitated the fledgling insurgency. The city center went into lockdown mode and forces from Kyiv and elsewhere in Ukraine arrived to bolster the shaky local law enforcement organs. Confronted by this unexpected show of resolve, pro-Kremlin forces began to melt away like spring snow. Rallies and sporadic clashes would echo on for some months, but the decisive period of the confrontation had now passed. With it went the Russian dream of a Novorossia empire.

Instead, control of the streets passed to the Ukrainian side. As if to underline this point, it was fans of local football club Metalist Kharkiv who in late April gave birth to the obscene terrace chant “Putin Hoylo” (literally ‘Putin is a Prick”) – a song that became a hugely popular anthem of Ukrainian defiance and a symbol of Kharkiv’s emergence as a bastion of resistance to the Russian hybrid war. Soon the whole country was singing along. In autumn 2014, the city’s colossal Lenin monument came crashing down. Many moaned about the destruction of this giant Soviet relic, but there have been no moves to return Lenin to his previous position of prominence.

Nobody wants to be the new Donetsk

The tensions of spring 2014 have never entirely left Kharkiv. A spate of terrorist bombings targeting pro-Ukrainian groups rocked the city in late 2014 and early 2015. Rumors regularly reemerge of an impending Kremlin attack or local uprising. With the Russian border lying so close to the north and Russian hybrid forces waging war to the south, there is certainly no room for complacency. Nevertheless, today’s Kharkiv is now an unambiguously Ukrainian city where even the most ardent local admirers of Vladimir Putin no longer speak of a Kharkiv People’s Republic. The living conditions in the occupied parts of Donetsk and Luhansk regions have seen to that, robbing the Russian rebellion of any residual romance. Instead of playing a key role in Putin’s hybrid war, Kharkivites find themselves having to deal with the consequences. The city is home to Ukraine’s largest IDP population, with the massive influx of displaced Donbas residents placing a huge strain on local social services.

The victory of Ukrainian Kharkiv was vital for Ukraine’s survival, but the completeness of this triumph should not be overstated. Today’s Kharkiv remains a city of diverging opinions and considerable Russian sympathies – much as it has always been. Kharkiv’s formerly pro-Russian Mayor Gennady Kernes remains in his post, having won reelection in late 2015 in a landslide election victory while posing as a pragmatic patriot. The continued popularity of Mayor Kernes should come as no surprise. Even without the support of imported insurgents from Russia itself, Kharkiv’s pro-Russian camp has always been large, vocal, and influential.

Nobody has managed to come up with any exact figures for the size of the respective pro-Ukrainian and pro-Russian contingents in today’s Kharkiv. The most plausible estimates place both groups at no more than around 10-20% of the population. Crucially, it is widely accepted that the vast majority of Kharkivites would prefer not to take sides. After a century of relentless Soviet and post-Soviet hyperbole, they have become immune – or maybe just exhausted. A mood of worldly cynicism reigns supreme.

Many believe this indifference to political sloganeering actually saved Kharkiv from disaster back in 2014. While many international journalists have sought to depict the city as torn between two passionate and polarized camps, the reality may be that most of the geopolitical tension in Kharkiv during the early stages of the Russian hybrid war came from outside sources. Writing in POLITICO, British author Peter Pomerantsev called Kharkiv a place that defied definition in terms of bipolar dividing lines. “The population’s political passivity and disinterest in real change that so infuriates pro-democracy activists also means it is hard to stir up strife: post-Soviet cynicism saved Kharkiv from Russia. But the fractured nature of life in Kharkiv means a unified push for reforms is also impossible. In this world, men like Kernes, who can change without ever changing, flourish.”

Today’s Kharkiv is now Ukraine in microcosm – a city struggling to balance a growing sense of Ukrainian identity with a desire to cling to the certainties of the shared Soviet past. To a significant degree, the success of the new Ukraine will also depend on the success of Kharkiv. If the city can prosper in post-Euromaidan Ukraine, it will serve as the final nail in the coffin of Russian expansionist ambitions in the region. However, as long as Kharkiv lingers in the no-man’s-land of transition, Ukraine as a whole will remain vulnerable.