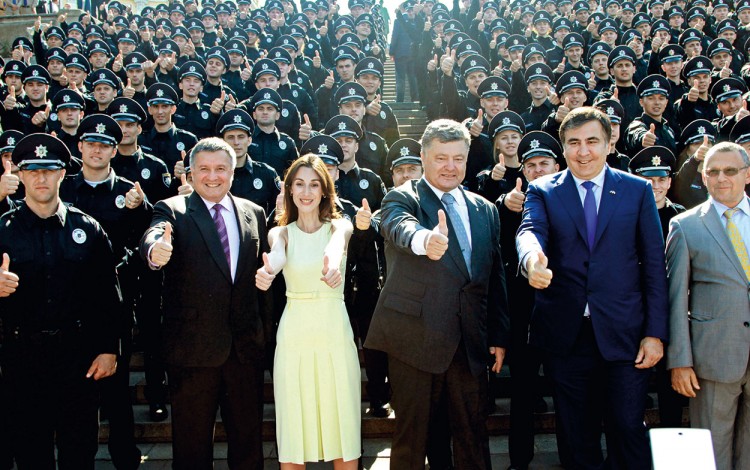 There is added buzz around Odesa these days. The excitement is largely down to the arrival in town of former Georgian President Mikheil Saakashvili, who was appointed governor of the strategically crucial Black Sea region by Ukrainian President Petro Poroshenko in May.

Since his arrival, the larger-than-life Georgian has embarked on a one-man crusade to transform this notoriously corrupt and apolitical port city into an unlikely engine for the reform of the entire Ukrainian nation. He has dismissed swathes of time serving bureaucrats and surrounded himself with a team of trusted Georgian reformers and Western-educated Ukrainian activists – many of whom are unpaid volunteers attracted by the allure of Mr. Saakashvili’s historic mission. War has been declared on everything from the oligarchic ‘shadow government’ in Kyiv to the potholed roads that prevent Odesa from taking up its rightful place as a gateway to Eastern Europe.

This quest has attracted remarkable levels of local support. Despite being an outspoken enemy of the Kremlin in a city where Russian ties traditionally run deep, Mr. Saakashvili has firmly established himself as the most popular governor in living memory. ‘Saakashvili selfies’ are the height of fashion among Odesa high society, and he is regularly mobbed in the street by members of the public eager to show their support for someone who actually seems to share their hunger for change.

Mr. Saakashvili’s crusading style has also earned him new enemies. The recent mayoral elections in Odesa demonstrated the limits of what he can achieve through strength of personality alone. His candidate for mayor, the US-educated Sasha Borovik, emerged late in the race as a strong challenger to incumbent Gennadiy Trukhanov, but was ultimately thwarted amid accusations of widespread vote-rigging. Mr. Saakashvili complained that his candidate was denied access to all but two of Odesa’s thirty TV channels and had faced opposition from a broad coalition of interest groups tied to the existing Odesa elite.

This mayoral setback is unlikely to prove fatal to the Saakashvili Revolution, but it served to illustrate the scale of the challenge he faces. As President of Georgia, he had control over state budgets, untrammeled access to the national media, and could call on the support of the police and security services. In his new role as unelected Odesa Governor, Mr. Saakashvili has none of these advantages and finds himself forced to rely largely on his fame and public popularity. He compensates by being everywhere at once and living up to his previous Georgian nickname of the ‘Energizer Bunny’.

Many observers regard the appointment of Governor Saakashvili as President Poroshenko’s boldest move. Some felt that the choice would backfire disastrously, given Odesa’s historic links to Russia and the city’s ambivalent attitudes towards Ukraine’s Euromaidan Revolution. Odesa occupies a special place in the Kremlin’s vision of a wider ‘Russian World’ beyond the borders of today’s Russian Federation. Identified as one of eight Ukrainian cities ripe for separatist takeover during the Kremlin’s ‘Russian Spring’ campaign following the seizure of Crimea, it was the scene of deadly clashes in May 2014 that left dozens dead. Despite these tensions, the city failed to rise in support of Putin’s vision of ‘Novorossiya’ and the separatist threat has since subsided.

Security remains an issue: although far from the front lines in east Ukraine, Odesa has been the scene of regular bomb blasts targeting Ukrainian military support groups. Nevertheless, the days when a Russian takeover seemed imminent are long gone. Ultimately, local identity is far more important to Odesites than Russian imperial nostalgia, and war is seen as bad for business in this most mercantile of port cities.

Governor Saakashvili often speaks out against the continuing Kremlin threat to Ukraine, but in his current role as regional administrator, his real enemies are closer to home. As the recent mayoral elections demonstrated, his reformist agenda has placed him in direct confrontation with a powerful alliance of vested interests that is deeply entrenched in every aspect of Odesa society.

So far, the reformist gains have been small but symbolic. American-style patrol police now cruise the streets of Odesa (thanks largely to the efforts of fellow Georgian reformer Eka Zguladze at the Ukrainian Interior Ministry), while Governor Saakashvili recently opened Odesa’s first Public Administration Office – a one-stop-shop where Odesites will be able to complete formerly time-consuming bureaucratic procedures in a matter of hours. These two measures are both from his Georgian playbook, and both target the rampant everyday corruption that has fuelled two Ukrainian revolutions in the space of a decade.

These innovations have been welcomed, but Governor Saakashvili’s overall success will be measured by his ability to combat high-level corruption and improve the broader business climate. Ukraine regularly ranks as the most corrupt country in Europe, with Odesa often labelled the most corrupt city in Ukraine. This verdict may be overly harsh, but few would argue that Odesa’s port facilities have been a nest of corruption for decades. The Saakashvili team are well aware of the central role played by the port in Odesa’s corruption schemes, and they are busy introducing revolutionary changes to port customs procedures designed to bring Odesa into the digital age and cut clearance times from days to hours. If the plan succeeds, it will generate huge budget revenues while attracting new traffic to the port. Corruption will become considerably more difficult.

For the time being, most international investors are waiting to see if Governor Saakashvili can deliver on his bold promises. He has already succeeded in generating significant international interest in his Odesa Revolution, but the mood of optimism he has generated needs to translate into concrete reformist gains before he is able to attract major international investment to the region.