Savchenko mania: why Ukraine is so desperate for new leaders 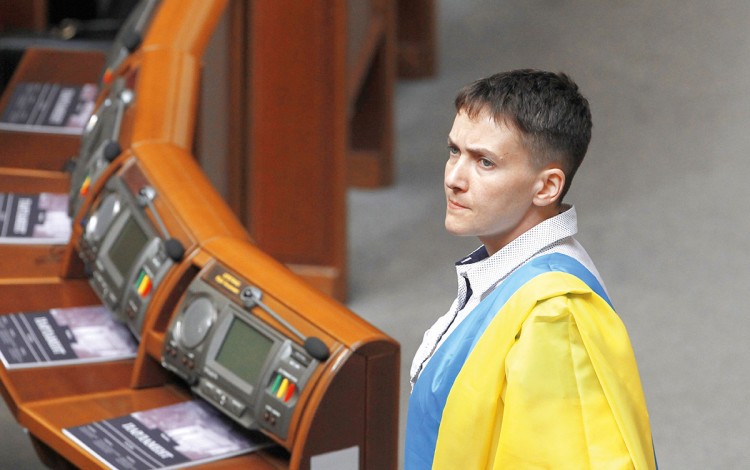 Nadiya Savchenko captured the world's imagination with her defiance of the Kremlin but she is a novice politician. Talk of a leadership role in Ukraine reflects public frustration with current political leaders
Business Ukraine magazine

The release from Russian captivity of Ukrainian political prisoner Nadiya Savchenko has sparked a remarkable outpouring of media speculation over the role she could now go on to play in domestic politics. These overblown expectations have served to highlight just how desperate the Ukrainian public is for leaders they can actually believe in.

A pilot not a politician

The hyperbole surrounding Savchenko has been completely out of proportion to her status as a military volunteer whose courtroom defiance in Russia made her an unlikely national icon and an unexpected international celebrity. This breathless post-release coverage reached a peak of absurdity with headlines suggesting she was already a potential candidate for the Ukrainian presidency. Other commentators have speculated over whether Savchenko would be able to ‘reload the revolution’ or bring about the downfall of the country’s all-powerful oligarchs. Given that the 35-year-old Ukrainian military pilot has no prior political experience to speak of beyond her absentee election to the Ukrainian parliament while languishing in a Russian jail, and bearing in mind the fact that she had never previously expressed any interest whatsoever in a political career, the scale of these expectations is both alarming and instructive. They highlight the shortcomings of Ukraine’s present generation of leaders, while also hinting at the ongoing identity crisis Ukraine inherited in 1991.

The Ukrainian political arena is all about personalities. It is admittedly a far more diverse and competitive environment than the monolithic one-party systems commonly encountered throughout the rest of the former Soviet Empire, but Ukraine’s fledging democracy is nevertheless stuck in a state of arrested development. Whether we are talking about the Petro Poroshenko Bloc, the Yulia Tymoshenko Bloc, or any number of ambiguously named political parties that serve as vehicles for their prominent leaders, the political culture of the country is defined individual personalities rather than the political principles that underpin the multi-party systems in more mature democracies.

Although representative democracy has clearly triumphed over authoritarianism in Ukraine, there is no escaping the fact that interests also trump ideas. The only discernable ideological argument that has gripped Ukrainian politics over the past two decades has been the flashpoint issue of future pro-European or pro-Russian alignment. Beyond this unhelpfully binary approach to Ukraine’s geopolitical destiny, the country’s political arena has essentially become little more than a giant popularity contest where rivals drawn from the same national elite seek to talk up their own credentials as competent managers while portraying their opponents as hopelessly corrupt.

Starved of credible political leaders offering identifiable ideological positions, the Ukrainian public has instead switched its support between individual personalities with the fickleness of a love struck teenager. This emphasis on individuals, coupled with the general absence of political principles, makes Ukraine particularly susceptible to the panaceas and platitudes of populism. It also leads to the regular rise and fall of individuals who are initially overhyped, before eventually being discarded once they prove unable to live up to the unrealistically high expectations of the public.

In this sense, Nadiya Savchenko is merely the latest in a long line of such saviours. Prior to his devastatingly underwhelming presidency, Viktor Yushchenko was widely hailed as the man to rescue post-Soviet Ukraine. Yulia Tymoshenko became the next people’s champion, until she fell out of favour amid allegations of megalomania and a flourishing personality cult. More recently, figures including Vitaliy Klitschko, Arseniy Yatsenyuk, Oleh Lyashko and Mikheil Saakashvili have all enjoyed rapid rises in public esteem, only to suffer equally quick slumps once the novelty of a fresh face began to wear off. Meanwhile, the parties they lead continue to emerge and dissolve like clouds in the springtime sky.

There is an equally striking absence of national leaders beyond the realm of Ukrainian party politics. In the religious sphere, divisions between different denominations – most strikingly between the outwardly identical but geopolitically competitive Moscow and Kyiv Patriarchates of the Ukrainian Orthodox Church – prevent the emergence of spiritual leadership on the national level. Even the hybrid war with Russia has failed to produce a new generation of national leaders from within the ranks of the country’s military. The conflict has certainly brought about a consolidation of Ukrainian identity, but not a single individual military commander has succeeded in catching the public’s imagination. Instead, it is strangely appropriate to note that the only acknowledged heroes of the conflict are the largely faceless everyman figures of the national volunteer movement.

Ukraine’s lack of strong leaders is not without its advantages. It has allowed Ukraine to avoid the kind of vertical integration that has made dictatorship all-but-inevitable in neighbouring Russia, while helping grassroots democracy gain a firm foothold throughout the country. However, it also serves as a barrier to national progress by keeping the country stranded in ideological no-man’s-land. Today’s Ukraine desperately requires clear leadership based on coherent ideas if it is to progress beyond its present status as a de facto buffer state languishing between European democracy and Eurasian authoritarianism.

The lionizing of Nadiya Savchenko reflects a national malaise that has plagued Ukraine since independence. Ukraine’s lack of sovereignty prior to 1991 robbed it of the national myths essential to all state building, while also denying it the legacy of historical leaders capable of commanding universal respect. As a result, Ukrainians have spent the past quarter of a century arguing over what it means to be Ukrainian, while would-be national leaders have sought to be all things to all people without ever committing themselves to an identifiable ideological position. Nadiya Savchenko may well have a role to play in ending this identity ambiguity, but she is highly unlikely to be the leader Ukrainians have been waiting for. Instead, Ukraine’s future leaders will emerge from the country’s thriving civil society, and will unite the nation around the European values and notions of civic identity that fuelled the Euromaidan Revolution and the Orange Revolution before it.