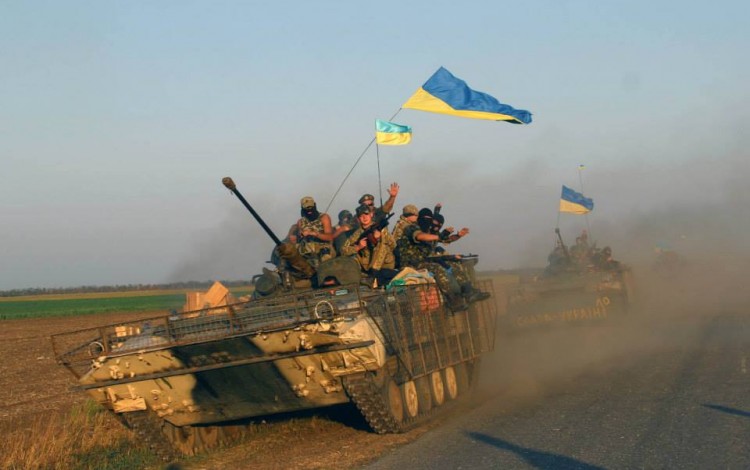 The recent BBC interview with fugitive ex-Ukrainian President Viktor Yanukovych sparked a flood of sniggers and online memes revolving around the disgraced former leader’s stunningly inane comments about the ostriches found at his palatial Kyiv region residence. For the record, Yanukovych said that the birds were not his, and claimed he was merely looking after them. Hidden among all the guffaws at this latest ‘Yanecdote’ was the far more serious matter of a BBC introductory voiceover that matter-of-factly characterized the conflict in east Ukraine as a civil war. In stark contrast to the ostrich fiasco, this was no laughing matter. On the contrary, it was a massive PR victory for the Kremlin and a major setback for Ukraine in its quest to rally global support against Russian aggression.

The BBC is not the first international news outlet to opt for the ‘civil war’ terminology to describe the fighting in Ukraine’s industrial heartlands, but it is one of the most widely respected media brands to do so. By defining the fighting as a ‘civil war’, the BBC is adding credibility to Kremlin claims that Russia is not directly involved the conflict. This has major implications for the international response to the Ukraine crisis. As long as the conflict is seen primarily as an act of Russian aggression, Ukraine can expect to receive unambiguous backing from a majority of countries. However, if international opinion leans towards regarding the fighting as a civil war, then pressure will mount to keep out of the conflict and avoid taking sides.

In a modern information war, choice of terms is crucially important. Moscow understands this well, and has used the ‘civil war’ label consistently over the past year, all the while insisting that Russia is an innocent bystander. This ‘civil war’ narrative is a core component of the Kremlin’s information offensive against Ukraine, which is in turn a key element in the broader hybrid war Russia is waging in its erstwhile colony.

EVIDENCE OF RUSSIAN ARMY IN UKRAINE

Russia’s insistence that the conflict in Ukraine is domestic in nature is perfectly understandable. However, it is more difficult to understand why authoritative international media outlets like the BBC are also choosing to adopt the ‘civil war’ diagnosis, given the overwhelming amount of available evidence pointing to direct Russian involvement.

The most significant and direct Russian role in the Ukraine conflict is the involvement of the Russian armed forces. Key pieces of evidence include the testimonies of Russian soldiers captured in Ukraine, eyewitness accounts from international correspondents, physical and photographic evidence of weaponry exclusively used by the Russian armed forces, and social media posts by Russian troops highlighting their activities inside Ukraine.

As early as September 2014, global human rights watchdog Amnesty International classified the fighting as an international conflict based on evidence of direct Russian military involvement. Meanwhile, EU leaders have been sufficiently convinced of the Russian army’s role in the fighting to include members of the Russian military establishment on the EU sanctions list.

The Kremlin has defiantly rejected these claims, but recent moves by Moscow to censor peacetime military deaths point to the problems Russia is having in keeping its military involvement secret. Russian human rights groups have also reported on a number of cases in which Russian soldiers claim to have been pressurized into agreeing to fight in Ukraine, despite the absence of any constitutional basis for their involvement in the conflict. Mysterious unmarked graves in Russian cities have added to the building body of circumstantial evidence pointing to the Russian army’s participation in hostilities. At this point, virtually the only thing missing is footage of Russian army columns in full regalia marching through Donetsk under the Russian flag.

THE RUSSIANS BEHIND UKRAINE’S ‘CIVIL WAR’

A survey of the nominal leaders of the separatist insurgency in east Ukraine also highlights Russia’s orchestration of the conflict. The most high-profile leader in the early days of the insurgency was Russian military intelligence officer Igor Girkin (widely known by the nom de guerre ‘Strelkov’), who became a poster boy among Russian nationalists before fleeing from Ukraine in August 2014. Girkin is a veteran of numerous post-Soviet hybrid wars in Russia’s former empire, and has boasted that he and his commandos ‘pulled the trigger’ of the conflict in east Ukraine. Many of the other initial insurgency leaders were also Russian

Just as damning as the presence of Russian citizens among the separatist movement’s leadership is the absence of high-profile local figures. No prominent member of pre-war east Ukrainian society holds any senior position in the self-styled breakaway republics. Ukrainian citizens currently involved in the leadership of the insurgency are exclusively obscure figures drawn from the political fringes of east Ukraine. In a genuine civil war, local community leaders would have taken on key roles. In the current east Ukraine conflict, they are conspicuous by their complete absence. Instead, we have a series of relatively unknown personalities who are widely regarded as window-dressing designed to distract from Moscow’s continued control of the conflict.

HOW MANY ‘UKRAINIAN SEPARATISTS’ ARE RUSSIANS?

What do we know about the origins and identities of the rank-and-file insurgent fighters? There is no reliable data on the composition of insurgent forces in east Ukraine, but accounts provided by the insurgents themselves suggest that somewhere around 50% of all fighters are Russian citizens, with this percentage likely to be even higher in certain paramilitary groups. Most accounts suggest that some insurgent battalions are virtually 100% Russian in terms of personnel, while others include both Russians and Ukrainians.

This major Russian presence is no secret. While denying the presence of regular Russian army forces in Ukraine, militant commanders have repeatedly stated that without the support of Russian military veterans, their insurgency would have been impossible. Nor has the Kremlin sought to downplay the role of Russian citizens fighting in Ukraine, merely claiming that they are ‘powerless’ to prevent Russians from travelling to the war zone as volunteers.

In a genuine civil war, local community leaders would have taken on key roles. In the current east Ukraine conflict, they are conspicuous by their complete absence

As well as heaping praise on Russian ‘volunteers’, militant leaders in east Ukraine have also been vocal in their criticism of the local population for its apparent unwillingness to join the fight as combatants. In summer 2014, Girkin himself publicly attacked the menfolk of east Ukraine for failing to volunteer, issuing a bitterly sarcastic appeal to the women of the Donbas in which he called upon them to fight ‘as their men are unwilling to do so.’ This lack of local enthusiasm is in stark contrast to Russia itself, where recruitment points operate openly in a number of regional cities, while an array of Russian online groups raise money and accept donations for the insurgency.

Publicly available information points to an insurgency sparked by Russian agents, led by Russian commanders, and manned in large part by Russian fighters using Russian weapons. Nevertheless, the presence of significant numbers of local Ukrainian citizens within the separatist ranks is apparently sufficient reason for some correspondents to define the hostilities as a ‘civil war’. This characterization makes the peaceful resolution of the conflict even more difficult, while posing significant threats for further regional escalation. It distorts the reasons behind the fighting, robs Ukraine of victim status, and absolves Russia of responsibility for a fight Moscow started and has continued to fuel.

As long as media outlets like the BBC continue to pay lip service to the Kremlin’s ‘civil war’ claims, the underlying causes of the conflict will remain obscured and unaddressed, making a return to peace almost impossible. Meanwhile, Russia will inevitably be emboldened by the success of its ‘civil war’ narrative in Ukraine. It may then only be a matter of time before Moscow seeks to employ similar tactics elsewhere. If the international media is ready to accept claims of a Ukrainian ‘civil war’ despite so much evidence pointing directly towards Russian responsibility, what is to stop the Kremlin from sparking similar ‘civil wars’ in the likes of Latvia, Estonia, Moldova or Kazakhstan?