Nation building in the age of globalization: Russia's accidental but important role in the search for an inclusive sense of Ukrainian identity in the post-Soviet era 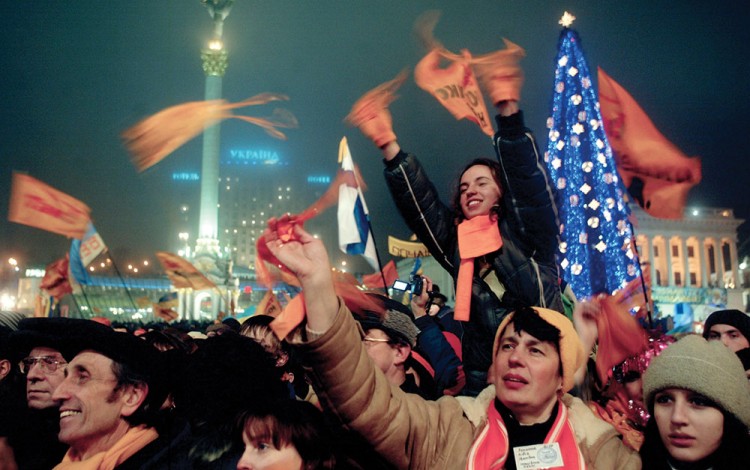 Ukraine marks the twenty-fifth anniversary of its independence with issues of identity still very much at the forefront of the national debate. The continuing hybrid war with Russia has served to strengthen the post-Soviet consolidation of Ukraine identity, broadening perceptions of what it means to be Ukrainian. Earlier interpretations based primarily on ethnic and linguistic lines are currently giving way to a wider civic definition that embraces all citizens, including native Russian-speakers along with a diverse range of ethnic and religious minorities. This process has been underway since 1991. Ukraine’s evolving sense of self is a crucial element in the country’s nation-building process. It will continue to play an important role in the development of Ukrainian society as Ukraine moves further away from the imperial past and finds its place within the ranks of the international community.

Any discussion of Ukrainian national identity must necessarily take into account Ukraine’s relatively short history as an independent state. Aspects of Ukrainian identity date back many hundreds of years, but the concept of an independent Ukrainian state first gained geopolitical prominence in the early decades of the twentieth century. Until the formal establishment of the USSR in the early 1920s, Ukraine had rarely been included as a distinct country on international maps or atlases. Efforts to create a viable Ukrainian state in the wake of the Russian Revolution had failed, despite various short-lived attempts at establishing sovereignty.

At the time, recognition of a separate and distinct Ukrainian nation was far less widespread than it would become later in the twentieth century. Many people have now forgotten, but until World War II, many Poles and Hungarians often denied that Ukrainians existed as a people. Today, such ‘Ukraine denial’ sentiments are restricted to Russian leaders. Russian President Vladimir Putin still prefers to talk of Ukrainians and Russians as ‘odyn narod’ (one people).

The appearance of Ukrainian independence aspirations during the latter stages of World War I was not a very welcome development for the Western powers. This lack of outside enthusiasm for an independent Ukraine would remain evident until the USSR disintegrated in 1991. After WWI, the victorious Western powers agreed to the de facto partition of Ukraine, with the lands of today’s Ukraine divided between four countries (Poland, Czechoslovakia, Romania and the USSR). The Treaty of Versailles dramatically altered the map of Eastern Europe, but there was no room for Ukraine among the many new nations created by the peace settlement. As Myroslav Shkandrij writes in his new study of Ukrainian nationalism, after 1923 Europe “appeared to have washed its hands of the Ukrainian question.”

In the final months of WWII, the Allied powers met in Yalta and agreed to Soviet dictator Joseph Stalin’s annexation of Ukrainian-populated lands in Romania, Hungary (formerly part of Czechoslovakia) and Poland, thus effectively reversing the partition of Ukrainian lands following the previous world war, while keeping a united Ukraine firmly under Kremlin control.

The roots of both World War I and World War II lie in the struggle for control of the vast East European borderlands between Germany and Russia. The entire first half of the twentieth century was a period of regional violent upheavals throughout much of Eastern Europe, with Ukrainians often deeply involved. From 1918, when the Austro-Hungarian Empire disintegrated, until 1947 and the ethnic cleansing of Ukrainians from south eastern Poland in Action Vistula, a state of armed struggle existed between Poles and Ukrainians over where their border should be. This Ukrainian-Polish border conflict was ultimately resolved by Stalin. By determining the Polish-Ukrainian border, Stalin accomplished what Ukrainian nationalist leaders Symon Petlura and Stepan Bandera could not. As a consequence, Ukrainians and Poles were able to set in motion a process of reconciliation and healing that has gained momentum steadily since the late 1940s.

Ukraine and Poland are now close allies – albeit allies who are still capable of engaging in memory wars related to the bloody borderland violence of the early twentieth century. All is quiet on the western front, but the eastern borderlands of the country are in flames. According to the overwhelming majority of Ukrainians, their country is at war with Russia. Putin’s territorial goals when he embarked on his hybrid war against Ukraine in early 2014 were the annexation of Crimea and eight southern and eastern Ukrainian oblasts in order to create ‘Novorossia’ (‘New Russia’). Much like the Poles decades earlier, today’s Russians have struggled to understand how a ‘non-people’ could fight so tenaciously to defend a ‘non-existent’ country. The Poles came round to understanding they were wrong about Ukrainians, but the Russians, bombarded by a continuous stream of surreal television propaganda, have yet to figure this important fact out for themselves.

American historian Stephen Kotkin recently wrote in Foreign Affairs magazine that Putin is in some respects worse than Stalin, who at least recognised “the existence of a Ukrainian nation separate from a Russian one.” However, both dictators share the same attitude towards independent states on their borders, “as weapons in the hands of Western powers intent on wielding them against Russia.” Kotkin writes that Russia views its neighbours not as potential friends but as “potential beachheads for enemies.” Two factors suggest that the Ukrainian-Russian border conflict will be with us for a long time to come. First, both the Putin regime and the country’s ‘democratic’ opposition support the annexation of the Crimea. Second, Putin is de facto president for life. As long as he is Russia’s leader, he will seek to destabilize Ukraine. Ukraine must therefore continue to forge a post-Soviet national identity against this backdrop of Russian aggression.

Since 1991, Ukrainian national identity has developed with the assistance of the Ukrainian state. The only Ukrainian president not to contribute to the process was Viktor Yanukovych. Of Ukraine’s first three presidents, east Ukrainian native Leonid Kuchma made the greatest contribution to the nation-building process. He promoted the Ukrainian language in education, spread the teaching of Ukrainian history, marginalised Crimean separatists (without a shot fired) and defeated Communist leader Petro Symonenko in the 1999 presidential elections, thereby burying any hope of reviving the USSR.

However, Kuchma also played the villain in another important aspect of Ukraine’s post-Soviet national-building process. A second peak in the evolution of Ukrainian national identity began with the 2000 Kuchmagate crisis – mass protests over Kuchma’s alleged role in the murder of journalist Georgiy Gongadze that set in motion four years of civil society mobilisation. This was the first popular movement to grip the country since the late 1980s. It culminated in 2004’s non-violent Orange Revolution. This popular uprising represented the coming of age of Ukraine’s post-Soviet generation and was a triumph of the emerging middle classes. It was also far larger than the protests during Serbia’s Bulldozer Revolution and Georgia’s Rose Revolution.

A third peak in the evolution of Ukrainian national identity began with the Euromaidan Revolution and has continued to gain momentum during the ensuing hybrid war with Russia. President Yanukovych was widely perceived to be dragging Ukraine backwards to neo-Soviet policies. In this context, the Euromaidan Revolution resembled a national liberation struggle. Many Euromaidan activists and self-defence volunteers went straight from the Maidan to the frontlines in eastern Ukraine.

Since the outbreak of the Russian hybrid war in Ukraine, the biggest transformation in terms of national identity has taken place among Russian-speaking Ukrainians – especially those living in eastern and southern Ukraine. Many of these Ukrainian citizens have mixed ethnic backgrounds and had previously harboured ambiguous feelings towards issues of national identity, with large numbers preferring to sit on the fence. Russian aggression in 2014 forced these Russian-speaking Ukrainians - many of them at least partially ethnically Russian - to make a definitive choice. The vast majority decided to embrace Ukrainian identity.

These chauvinistic fantasies ran into harsh realities on the ground in 2014 when Russian-speaking Ukrainians showed their patriotism by defending Ukraine’s territorial integrity. Thousands joined volunteer battalions or signed up for the Ukrainian Armed Forces. Millions more pointedly refused to respond to Kremlin calls for a ‘Russian Spring’ throughout the south and east of the country. It would be not far from the truth to say that Ukraine’s Russian-speakers destroyed Putin’s imperialistic ambitions and shattered his dreams of creating ‘Novorossia’.

This strengthening of Ukrainian national identity in the traditionally Russophile regions of southern and eastern Ukraine owes much to the historic questions posed by Putin’s hybrid war, but it is also part of a more organic process underway since 1991. Over the last twenty-five years, Ukrainian national identity has spread from its traditional heartlands in western Ukraine to the central regions of the country and on into the south and east. Voting patterns in presidential elections reflect changing attitudes to national identity during the post-Soviet era. In the first post-Soviet presidential election in 1991, patriotic candidate Viacheslav Chornovil could only secure a majority in three western Ukrainian oblasts. In 2004, pro-Ukraine candidate Viktor Yushchenko won election with majorities in both western and central Ukraine. In the 2014 presidential election, Petro Poroshenko took first place in every single region of the country – the first ever candidate to do so.

Attitudes towards national identity in eastern and southern Ukraine are still subject to fluctuations and remain volatile, but there has clearly been a major shift among ethnic Russians in the region away from post-Soviet ambiguity towards self-identification as Ukrainians. These changes are largely due to the sense of betrayal engendered by Russia’s hybrid aggression, which is especially strong among those with Russian heritage. In the first two post-Soviet decades, many residents of southern and eastern Ukraine had avoided the issue of national identity altogether by focusing instead on regional identity. Since 2014, this trend has become less prominent as feelings of Ukrainian patriotism have taken root in response to Russian aggression.

Young Russian-speaking Ukrainians who grew up after the Soviet collapse have also found their voice in the public arena, with football fans among the most vocal. For example, the hugely popular (and extremely rude) terrace anthem ‘Putin Khuylo’ is the work of fans from Kharkiv Metalist, despite the fact that the Kremlin regarded east Ukrainian capital Kharkiv as one of the cornerstones of the ‘Novorossia’ project and a bastion of pro-Russian sentiment.

Eastern Ukrainians are now far more likely to embrace notions of Ukrainian national identity, but significant challenges remain. While a sense of national identity has grown in the Ukrainian-controlled regions of the Donbas, support for Ukraine remains lower than in any other region in the country. In many towns and cities, polls show levels of patriotism hovering at around the 50% mark. A secondary problem is the political vacuum created by the disintegration of the pro-Russian Party of Regions and the overall weakness of Ukrainian political parties. A third factor is the continued influence of Russian culture and the Russian Orthodox Church.

Ukraine has demonstrated over the past two years of hybrid Russian aggression that is strong enough to defend its independence. However, the nation-building process will face continued threats and obstacles. A solution to the Donbas conflict must be found, and the millions of Ukrainian citizens currently living in the occupied zones must be reintegrated into Ukrainian society. The conflict must end if Ukraine is to integrate into the EU and NATO. Ukraine has come a long way towards achieving an inclusive and durable sense of national identity, but the country will never be truly secure until it moves decisively beyond the geopolitical no man’s land it has inhabited for much the post-Soviet era. A stronger shared sense of national identity can play an important role in this process.

About the author: Taras Kuzio is a Senior Research Fellow at the Canadian Institute of Ukrainian Studies, University of Alberta. His most recent book ‘Ukraine: Democratization, Corruption and the New Russian Imperialism’ (Praeger, June 2015) surveys modern Ukrainian political history from 1953 to the present