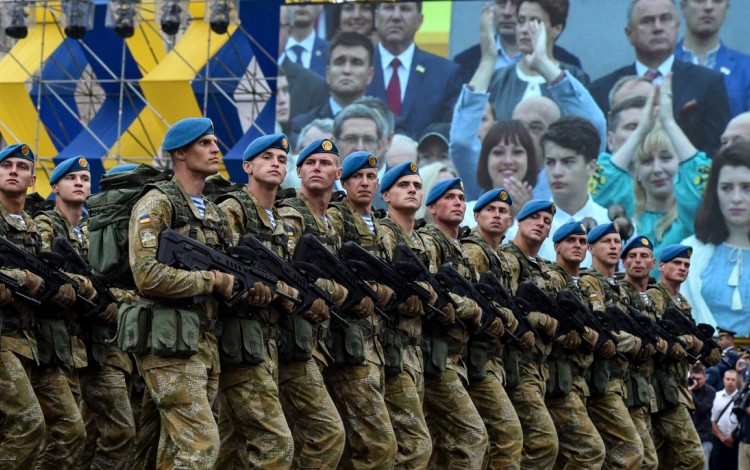 Vladimir Putin has done more for Ukrainian independence than any other single figure. This statement may seem perverse, given the fact that the Russian leader has occupied Crimea and is currently waging a hybrid war designed to dissect the country. Nevertheless, the fact remains that Vladimir Putin’s acts of aggression have served to consolidate Ukraine’s sense of national identity and unite the country as no Ukrainian politician could.

This unity and national pride was on show during the 24 August celebrations to mark the 25th anniversary of Ukrainian independence. Once a somewhat ambiguous and low-key holiday, Ukrainian Independence Day is now one of the highlights of the annual calendar, imbued with the kind of poignancy and power that is only possible in a nation fighting for its survival.

By launching a hybrid war against Ukraine, Putin has provided all Ukrainians with an enemy to unite against, regardless of their religion, ethnic background or mother tongue. Russian bullets and shells make no distinction between followers of the Moscow or Kyiv Patriarchates of the Ukrainian Orthodox Church, nor do they spare Russian-speakers while slaying Ukrainian-speakers.

He has also forced millions of Ukrainian passport holders with mixed family backgrounds to choose between their Soviet heritage and their Ukrainian nationality by creating a sense that all Ukrainians are in the same boat together. As a result, old notions of an exclusively ethnic and linguistic Ukrainian identity have given way to ideas of a more inclusive civic identity. The Ukrainian nation-building process is by no means complete, but it has enjoyed rapid acceleration as a direct result of Russian aggression.

This is pretty much the opposite of what Putin was hoping to achieve. When the Kremlin launched its ‘Novosossia’ campaign in spring 2014, the goal was the occupation and annexation of eight predominantly Russian-speaking Ukrainian oblasts representing approximately half the country. The remaining rump Ukrainian state was to become a puppet regime. The Kremlin plan envisaged engineered regional uprisings in cities across eastern and southern Ukraine, followed by carefully choreographed calls for Russian military assistance. However, a lack of local support derailed these plans in all but two oblasts. Even in Donetsk and Luhansk, local backing was so thin on the ground that the Kremlin was obliged to import protesters and insurgent troops from Russia itself.

Moscow’s error lay in the assumption that Russian-speaking Ukrainians were de facto Russians. This miscalculation is typical of Russia’s condescending post-Soviet approach to relations with Ukraine. It reflects an overestimation of the ties between Russian-speaking communities in the former USSR and Russia itself, while underestimating the strength of Ukrainian national identity among Ukraine’s native Russian-speakers.

In reality, language is not a very helpful indicator of political leanings in today’s Ukraine, where bilingualism is the norm and most people can switch from one language to the other in mid-conversation. Nor is speaking Russian a political statement. Kyiv is the largest Russian-speaking city in the world outside of Russia itself, and yet the Ukrainian capital is a staunchly patriotic city that has served as the engine of two post-Soviet revolutions seeking to drag the country out of the Russian orbit.

All this is lost on the Kremlin, which seems intent on clinging to the stale narrative of Ukraine as a manufactured country that owes its existence (and loyalty) exclusively to Mother Russia. There may have been some sympathy for such views in the early 1990s, but times have changed and an entire generation of Ukrainians have now come of age having grown up beyond the reach of Russia. Rather than acknowledging these changing tides and seeking to win Ukrainian society over with displays of brotherly love, Russia has preferred to treat 21st century Ukraine as a wayward child.  The anti-Ukrainian aggression of the Putin era has been instrumental in the process of dividing Ukrainians and Russians, while fatally undermining Soviet-era notions of ‘Slavic fraternity’.

The current ongoing hybrid war is merely the latest example of Putin’s ability to weaken Russia’s position in Ukraine via his blundering foreign policy. Back in 2004, the Russian President visited Kyiv on the eve of the country’s presidential election and lectured Ukrainians during a multi-channel live TV broadcast on the need to vote for his preferred candidate, Viktor Yanukovych. This act of hubris proved to be a miscalculation of biblical proportions. It infuriated millions of previously indifferent Ukrainians and served as one of the key drivers behind the Orange Revolution, which erupted within a matter of weeks.

Other unfriendly acts have included gas wars, trade barriers, relentless accusations of fascism, and the regular public denial of a separate Ukrainian national identity. Kremlin TV channels have broadcast entire documentaries arguing that Ukraine is an artificial state created purely to damage Russia, while political statements accusing Ukrainians of treacherous separatism are a virtually daily occurrence. Putin himself has repeatedly reaffirmed his vision of Ukrainians and Russians as ‘one people’ – an ironic position given the leading role he has personally played in dividing the two nations. All this is deeply distressing and annoying for Ukrainians, but it does little to weaken their growing sense of national resolve. Unsurprisingly, it has had entirely the opposite effect.

THE MAN WHO LOST UKRAINE

Ultimately, the time will come when Russia finally recognizes Ukrainian independence. Honest observers in Moscow will also have to acknowledge the personal responsibility Vladimir Putin bears for this harsh new geopolitical reality. Putin’s imperial posturing has been hugely successful domestically, where it has given post-Soviet Russians a renewed sense of patriotic pride. However, it has proven instrumental in strengthening Ukraine’s national identity and creating a sense of Ukrainian unity that might otherwise have proven elusive. Putin hopes to go down in Russian history as the man who returned Crimea, but at present it would appear far more likely that he will be remembered as the man who lost Ukraine.