UKRAINE ECHOES IN US ELECTION: Will Donald Trump be America’s Yanukovych? 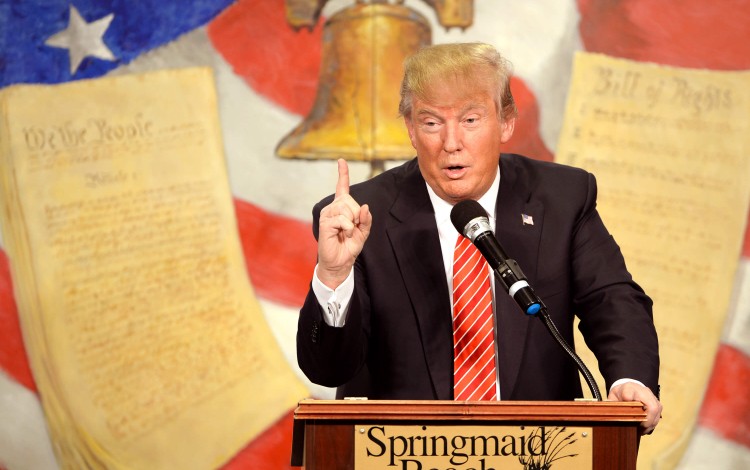 US presidential candidate Donald Trump and Ukraine’s fugitive former President Viktor Yanukovych have a lot more in common than a shared admiration for Vladimir Putin and close associations with the American political advisor Paul Manafort. In fact, the current US presidential election is increasingly coming to resemble Ukraine’s presidential race of six years ago – a vote that brought Yanukovych to power despite running against a more progressive candidate who was widely tipped to win.

These similarities are evident in terms of the US campaign mood, the candidates themselves, and the potential undemocratic post-election outlook. Much like Ukraine 2010, America’s 2016 campaign features rival candidates with record disapproval ratings. Like Yanukovych in 2010, Trump faces an experienced female opponent whose controversial record threatens to divide her electorate. Like Yanukovych, Trump appeals to embittered and marginalized voters angry at a perceived progressive agenda and hungry for a mythologized past.

The big difference is likely to be in the conduct of the electorate itself. Whereas millions of pro-European Ukrainians handed victory to Yanukovych in 2010 by choosing to stay home, most analysts agree that enough American voters will hold their noses and vote for Hilary Clinton later this year, despite the serious misgivings millions have about her candidacy.

A Clinton victory is clearly in Ukraine’s best interests because Donald Trump has spoken of an American withdrawal from NATO (which would mean the end of the security alliance), opposed sanctions against Russia, and supported good relations with Russian President Vladimir Putin. Moscow supports a Trump victory because he is clearly the closest thing they have to an ally across the Atlantic. His style of bombastic and politically incorrect politics is also comfortingly familiar to Russian audiences used to similarly over-the-top antics from the likes of Vladimir Zhirinovsky and International Eurasia Movement leader Aleksandr Dugin.

Negative voting will work against Trump

In any democratic country, voters will sometimes find themselves in a quandary when neither election candidate is appealing. This can often lead to negative voting tactics driven by notions of a lesser evil. Examples of this have been particularly striking in cases when there have been fears that one candidate’s victory would lead to democratic regression. In EU countries like France and Austria in recent years, moderate voters have repeatedly rallied to support the alternative to the Far-Right. I can still recall a Socialist French friend of mine voting for Conservative candidate Jacques Chirac back in 2002 in order to block National Front leader Jean-Marie Le Pen. Similarly, a Washington-based long-time Republican acquaintance told me this month that he would be voting for Hillary Clinton this year, even though he has not liked her since the 1990s.

Surveys certainly point to negative voting as Hillary Clinton’s biggest advantage. Both candidates are divisive and strikingly unpopular with everyone but their core supporters. This was also the case six years ago in Ukraine, when Yulia Tymoshenko ran for the presidency at a time when many of Ukraine’s pro-European majority had become bitterly disappointed by the failures of the 2004 Orange Revolution. Yanukovych was equally if not more unpopular across the country (indeed, he would become the first Ukrainian to win the presidency despite failing to win a majority of oblasts), but there was simply no enthusiasm for a Tymoshenko presidency and no big push for negative voting.

US voters are likely to act more maturely than Ukrainian voters did six years ago. They will vote negatively against Trump by voting for Clinton, despite their misgivings. In Ukraine in 2010, the so-called ‘Lviv intelligentsia’ of west Ukraine, together with nationalist elements like Svoboda Party, appear to have decided that they hated Yulia Tymoshenko more than they loved Ukraine. They followed Ukrainian President Viktor Yushchenko’s nonsensical advice to vote ‘no’ against both Yanukovych and Tymoshenko – advice that was readily and predictably ignored by Yanukovych’s electoral base in the south east of the country.

While Tymoshenko came first in both western and central Ukraine, she ultimately failed to get enough votes to secure victory. The stay-at-home voters effectively decided the outcome, with disastrous consequences for the country. It is ironic that west Ukrainians are statistically the country’s strongest supporters of European integration, and yet it was these non-voters who effectively awarded their country to Yanukovych.

How could this happen? Recently released documents claim that Viktor Yushchenko became very wealthy thanks to his spoiling role in Ukraine’s 2010 presidential election. It is also not difficult to imagine why nationalist groups like Svoboda Party might act in this way, given the long-standing allegations of funding from east Ukrainian oligarchs and other Kremlin allies. What is still difficult to fathom is the actions of the arrogant ‘Lviv intelligentsia’.

If Ukrainians had adopted the negative voting tactics of Europeans and Americans during the 2010 presidential election, they would have blocked Yanukovych’s victory. Instead, a Yulia Tymoshenko presidency would have produced four key outcomes for Ukraine. Firstly, Ukraine would have signed the Association Agreement with the EU far earlier. By the time of the next Ukrainian presidential elections in 2015, there would have been little question over the country’s European trajectory. With Ukraine’s European integration irreversible, it would have been too late for Vladimir Putin to pressure Ukraine into joining the Eurasian Union that came into operation in 2015. Secondly, there would have been no chance to lay the groundwork for Russia’s annexation of Crimea four years later – a step that I and numerous other observers were already warning about during the early days of the Yanukovych presidency. If it was so obvious that Yanukovych was ready to act in a treasonous way, why was it not apparent to the ‘Lviv intelligentsia’, who still believe they were right?

Thirdly, Yanukovych would have been prevented from establishing a mafia state. There would have been no Euromaidan Revolution. No protesters would have died on the streets of Kyiv and in the lonely forests surrounding the Ukrainian capital.

Finally, Yanukovych’s second presidential election defeat in six years would have led to a new and more moderate leader of the country’s pro-Russian political camp. The Party of Regions may have continued under this new leader, or new forces may have emerged, but it is difficult to see the Kremlin and its local allies persevering with a perennial losing candidate. Without a President Yanukovych to facilitate the preparations, there would have been no separatism in the Donbas. Russia would not have been able to undertake what I was already terming in summer 2010, ‘the Putinization of Ukraine’s security services’.

Democracy is fundamentally about voting for the person you regard as best suited to lead. In practice, this can often mean voting for the least bad option. Ukraine’s experience in 2010 highlights the dangers of refusing to vote for a disliked candidate, even if you regard the alternative as significantly worse.

Negative voting would have derailed Viktor Yanukovych’s presidential bid in 2010, thereby saving Ukraine from four years of criminal corruption and a further two-and-a-half years of revolution and war. Americans are unlikely to make the same mistake in November 2016. The implications of a Trump presidency appear to be too grave.

Nevertheless, it is worth remembering that many of the Ukrainians who stayed home in 2010 did not believe they were condemning their country to the most challenging and traumatic period in its modern history. American voters should keep this in mind as they weigh up the pros and cons of giving their support to Hillary Clinton.

About the author: Taras Kuzio is a Senior Research Fellow at the Canadian Institute of Ukrainian Studies, University of Alberta. His most recent work ‘Ukraine: Democratization, Corruption and the New Russian Imperialism’ (Praeger, June 2015) surveys modern Ukrainian political history from 1953 to the present.