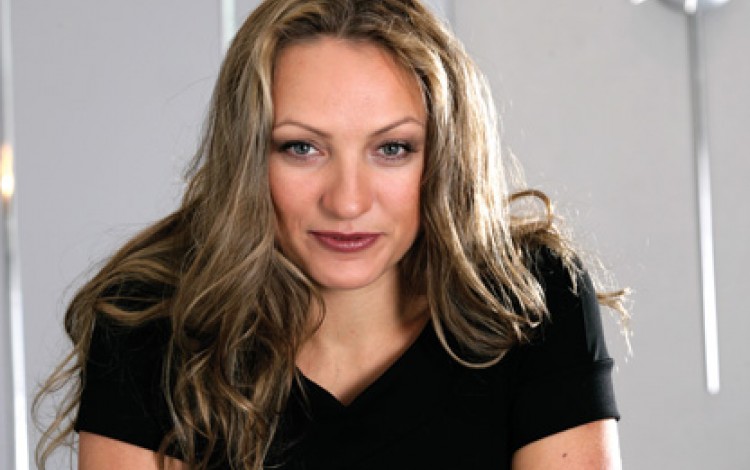 Over the past year, the defence of Ukraine has relied heavily on volunteers. This has been true of the soldiers fighting in east Ukraine, and it is equally true of the information war, where a vast volunteer force of citizen bloggers, amateur reporters and online sleuths has stepped up to counter the Kremlin’s initially overwhelming information offensive.

The most prominent of these infowar volunteers is Ukraine’s current Deputy Minister of Information Policy Tetyana Popova, who has taken on a number of increasingly high-profile roles in the infowar after first volunteering for service last summer as an advisor to Ukraine’s National Security and Defence Council. A media professional with over two decades of experience in the communications industry, Ms. Popova also currently serves as an advisor to the Ukrainian Ministry of Defence, where she cuts a somewhat glamorous figure alongside the staid suits and military top brass of the country’s defence establishment.

Ukraine has a long history of prominent females in military roles, having served as the homeland of the legendary Amazon warriors who so fascinated ancient Greek historian Herodotus. Media-savvy Ms. Popova is now following in this Ukrainian tradition, bringing with her a knowledge of modern communications strategies that makes her a formidable opponent for the Kremlin, while also sometimes placing her on a direct collision course with some of the more traditional elements within Ukraine’s military hierarchy.

Letting international journalists see for themselves

Business Ukraine magazine sat down with Ms. Popova in mid-June as she was in the process of presenting the new programme to embed foreign journalists with the Ukrainian army. Securing official approval for the programme proved to be the kind of Herculean challenge that she regularly faces as she attempts to transform Ukrainian military attitudes towards the media. “You cannot imagine how many papers I had to sign! At first I was told that counter-intelligence would never allow it,” she recalls. Nevertheless, the first batches of international journalists have now been successfully embedded with Ukrainian forces, allowing them to see the realities of the frontline firsthand. “We need to invite journalists to come and see for themselves rather than hearing it from us,” she reasons.

Old habits die hard, but Ms. Popova says despite encountering significant resistance to her initiatives at the middle-management level, she enjoys the full support of the Ministers of Defence and Information Policy. She recounts numerous incidents where she has found herself confronted by uncooperative members of the military establishment, including one particularly entertaining tale where some defence officials allegedly sought to secure her cooperation by bribing her with a bar of chocolate. Each tale ends with confirmation that the people involved have since been replaced. “We are seeing big changes in personnel. Compared to the situation one year ago, we’ve made big progress,” she says.

One of the key issues in the information war remains the presence of regular Russian army troops in east Ukraine. Despite a mountain of evidence pointing to direct Russian military involvement, the Kremlin continues to issue blanket denials while seeking to refute Ukrainian and international media claims. Ms. Popova was one of the driving forces behind the decision to provide media access to the two Russian Special Forces troops recently taken prisoner near Luhansk, and is encouraged by the level of international coverage their capture generated. Nevertheless, she also admits that information interests are not always given top priority, and claims that Ukrainian forces have actually captured over 100 Russian fighters, only to exchange most of them for Ukrainian prisoners. “The people we are dealing with over prisoner exchanges are very insistent that we should not show captured Russians in the media and claim that if we do so, they will no longer be interested in exchanging them,” she explains, adding, “I believe we should show them, and am pushing my colleagues to do so. If the Russians don’t want to exchange them afterwards, that’s their problem.”

The late 2014 decision to create a Ukrainian Ministry of Information Policy was widely criticized by the country’s media industry, leading to claims of an Orwellian agenda and accusations of Kremlin-style censorship. Opposing sides in any conflict are often prone to adopting each other’s tactics, but Ms. Popova is adamant that Ukraine’s info warriors will not be borrowing from Russia’s information policy playbook anytime soon. “The best counter-propaganda is the truth, not the fantasies created by the Russian media. We will not be repeating the Russian practice of broadcasting fake news like the story of the boy crucified by Ukrainian troops, or using Iraq War footage and claiming it is Ukraine.”

Instead, Ms. Popova wants to concentrate on getting Ukraine’s message out – both inside Ukraine and to international audiences. “I think we need to focus on strengthening our narrative, especially in the Russian language and in the occupied regions of east Ukraine,” she says. More battles lie ahead for Ms. Popova as she seeks to win support for her media initiatives among military professionals more accustomed to operating in secrecy, but she is confident that things are finally moving in the right direction. “They need to change and they are changing,” she says of the army institutions she works with. “Such attitudes might have been acceptable in the Soviet army, but not in a modern country looking to reform itself.”