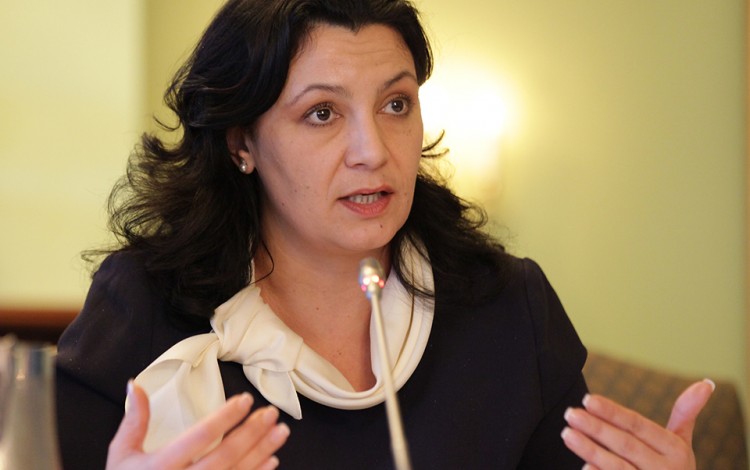 Ukraine’s Deputy Prime Minister for European Integration Ivanna Klympush-Tsintsadze might just have the most difficult job in the Ukrainian government. She finds herself charged with promoting Ukraine’s European integration at a time when the European Union itself is experiencing the biggest crisis of confidence in its entire history. Meanwhile, on the domestic front, the short-term realities of Ukraine’s European pivot have left ordinary Ukrainians counting the cost and increasingly asking whether all the sacrifices have been worthwhile.

In the circumstances, a little bit of fatalism would certainly be forgivable. Instead, the dominant sentiment when she sat down with Business Ukraine magazine in late December was one of black humor tempered by studied defiance. “I really liked the commentary from a Ukrainian diplomat who recently quipped, “We arrived at the wedding party just as the couple announced their divorce.” This is a very good analogy. This is how we feel right now,” she says.

The unfortunate geopolitical timing of Ukraine’s revolution has left the country in the curious position of being prominent among Europe’s declining group of pro-EU cheerleaders despite remaining firmly outside the elite club of member states. “Ukraine is currently the most Euro-optimistic country in the entire continent,” the Deputy PM declares. This bold statement reflects the feeling among many in Kyiv that Ukrainians have shown more faith in the European project than any of the EU’s current member countries. When millions of Ukrainians protested against the increasingly authoritarian government of Viktor Yanukovych in winter 2013-14, many carried EU flags as a symbol of the country’s European aspirations. The Euromaidan protest movement ended in a massacre of protesters – with the victims often portrayed as the first people to have given their lives for the sake of EU integration. This is an engaging narrative but it is not entirely accurate. The Euromaidan protest movement did indeed begin in response to the Yanukovych government’s last-minute decision to reject an EU Association Agreement, but the protests only really took off on a national scale after riot police violently dispersed hundreds of student protesters. While thousands had joined initial gatherings in favour of the EU Association Agreement, millions took part in subsequent protests demanding respect for what they regarded as the quintessential European values of democracy, human rights, and the rule of law. The roots of the revolution lay in a civilizational choice rather than a geopolitical trajectory.

This commitment to core European values has not provoked the kind of emphatic response from Brussels that many in Ukraine expected. The Association Agreement remains unratified. Bilateral trade has improved, but continuing quotas have left many Ukrainian exporters feeling frustrated. Even the symbolically important issue of visa-free travel remains elusive, despite endless assurances that the process is nearing completion. Ms. Klympush-Tsintsadze remains optimistic about the prospects of visa-free status, but acknowledges that even this has issue become a symbol of the slow progress undermining Ukraine’s bid to move closer to the rest of Europe. “The visa-free regime will leave a bitter taste even once it is implemented because of the prolongation of the process,” she concedes.

It has been a year of supreme frustration for Ukraine’s EU integration efforts, with events across the continent repeatedly working against the country and providing fuel for domestic skeptics. The UK’s Brexit referendum vote has served as the headliner development of 2016, creating the potential for further departures and putting the future existence of the entire EU project in question. This has made talk of deepening ties with Ukraine politically toxic, leaving Kyiv with little option but to wait patiently for more opportune times.

Brexit was a major shock for the EU, but the harshest blow of the year from a Ukrainian perspective was arguably the April referendum in the Netherlands, which saw a landslide majority of Dutch voters rejecting ratification of the EU-Ukraine Association Agreement. Few in the Netherlands seemed particularly concerned about the details of the Ukrainian agreement with the EU. The vote was essentially a chance for anti-EU forces to express their opposition to Brussels. Leading figures in the ‘no’ camp openly spoke of the referendum as a protest against the European Union as whole, with Ukraine’s European ambitions held hostage to long-standing anger over a wide range of Brussels policies. Ukraine’s oft-voiced commitment to European values meant little in this broader geopolitical equation.

Ms. Klympush-Tsintsadze sees this absence of commitment to core European values as a problem affecting the whole of the EU and admits it is doing much to undermine Ukraine’s integration bid. “My feeling is that societies in Europe have actually forgotten the values that their economies and statehoods are based on. The values of the EU do have to be defended,” she says. “This was understood by the grandparents of today’s EU citizens, but seems to have been forgotten by younger generations. Everybody is taking everything for granted. It seems that the nations of Central and Eastern Europe who joined the EU later have a better, fresher memory of how they implemented change. They have a clearer understanding about the importance of basic European values. The older democracies have a sense that everything is so well rooted it no longer needs protection.”

These setbacks have inevitably led to declining levels of enthusiasm for EU integration within Ukraine. This process has made it even more difficult to push through the reforms demanded of the country as it seeks closer ties with Brussels. While few MPs wanted to be singled out for impeding Ukraine’s access to visa-free EU travel, the lack of progress towards broader integration, as well as an absence of any clear long-term goals, has made it more difficult to sell painful reforms. “All of these issues have served to demotivate the Ukrainian public and Ukrainian political parties,” Ms. Klympush-Tsintsadze concedes. With no EU membership perspective on the table, she struggles to identify the next big carrot to entice further reforms. Instead, the lady charged with leading Ukraine’s EU integration efforts prefers to focus on something Ukrainians can themselves control – transforming the country’s still largely Soviet state apparatus along the lines of the EU model. “In terms of motivation, all we need to do is look at how people live in the EU,” she argues. “The freedoms and rights they enjoy, starting from healthcare and education, will create sufficient stimulus. This is something that we are aspiring to build in Ukraine. The rules in place within the EU have insured the kind of development these countries now enjoy. I think the best motivation is to build Europe in Ukraine and make sure we have the same possibilities here. Once we achieve this, at some point in the future we can then decide about an official membership request.”

Few expect the EU integration climate to improve in 2017. With French, Dutch and German elections on the horizon, the current anti-EU populist threat is widely expected to heighten, which is bad news for Ukraine. Ms. Klympush-Tsintsadze was not expecting to face such a challenging European environment when she accepted her current post in spring 2016. On the contrary, she initially interpreted her role in terms of becoming the key coordinator as Ukraine adopted a wide range of EU standards within the framework of sweeping post-Maidan reforms. “When I agreed to take this job in April, I thought my main task would be working with ministries to implement the EU-UA Association Agreement. Unfortunately, because of developments like the Netherlands referendum and Brexit, I find myself having to focus my efforts outside the country. I did not think I would need to explain repeatedly that Ukraine had met all the requirements for the visa-free plan. I did not expect my job would involve so much explaining of why the EU should maintain Russian sanctions. For Ukrainians, it is self-evident that sanctions should remain in place, because Russia has not met its obligations and continues to lie and manipulate. But it is not self-evident in a lot of European capitals. All of this consumes a lot of time and occupies the very limited resources at Ukraine’s disposal.”

Why no Russia fatigue?

Europe’s lack of urgency with regard to post-revolutionary Ukraine is a source of barely concealed anger. Ms. Klympush-Tsintsadze complains about the lack of recognition for Ukraine’s considerable reformist achievements since 2014, and roundly rejects any suggestion that ‘Ukraine Fatigue’ is justified. “Only negative news from Ukraine is making it into the international media,” she complains. “I can understand this. It is not sexy to talk about successful audits of state-owned companies. But this adds to the sense of fatigue. My question is, why is nobody fatigued about Russia? Why is it about us, who are making an effort every single day? We are paying a huge price for our conscious decision, for making a civilizational choice.”

Despite the frustrations she has encountered since taking on her Deputy Prime Ministerial role, Ms. Klympush-Tsintsadze seems confident the tide of history will eventually turn once again in Ukraine’s favor. She believes Europe will eventually have to acknowledge the importance of a stable and secure Ukraine, and expects the younger EU members with their own Soviet inheritance to play an important role in this process. “If there is no security and stability in Ukraine, there won’t be stability and security in Europe. Central European countries understand this well, because they know the threats we are standing up to. The other nations of the EU that have no experience of the Soviet system do not know what we are confronting. It is not only an issue of Russian aggression. It is also about trying to deal with the monstrous legacy of the Soviet Union. This is something deeply embedded in the Ukrainian state apparatus. It is evident in some traditions and behavior, as well as in quite a few existing laws, rules, and procedures.”

Ultimately, Ukraine’s Deputy Prime Minister for European Integration recognizes that the current process is a marathon and not a sprint. The country’s current EU prospects may appear less than rosy, but she remains convinced in Ukraine’s ability to move closer to the rest of the continent without necessarily gaining the green light from Brussels. “It doesn’t matter whether Europe is ready to accept Ukraine’s EU membership today. We have been European for centuries. We have always belonged to Europe. I don’t have any doubts about who we are. It is now all about becoming modern Europeans.”