President Poroshenko is coming under increasing fire for his failure to live up to the expectations of the Euromaidan Revolution. With almost all of the post-Maidan reformers now out of government, many fear a return to the oligarchic status quo of the pre-Maidan period. Veteran Ukraine observer Taras Kuzio explores the striking similarities between Petro Poroshenko and his predecessor as revolutionary-turned-president, Viktor Yushchenko, who also came to office amid talk of historic change only to fall far short of expectations 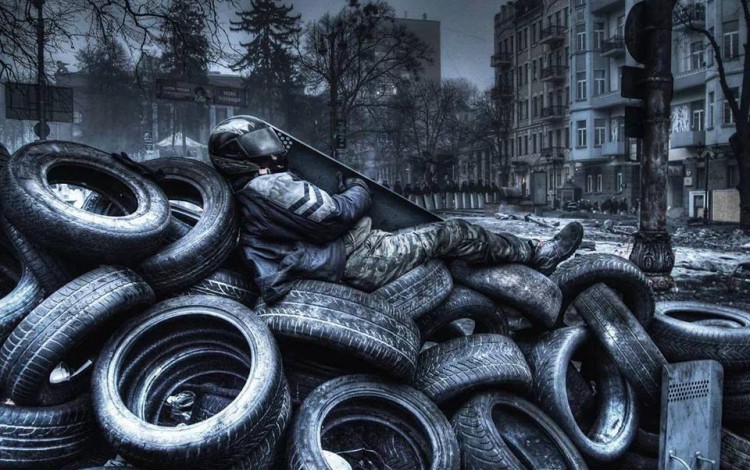 A protester rests during Ukraine's 2013-14 Euromaidan Revolution. Ukraine has since mobilized to resist a Russian hybrid war offensive in the east of the country but has been less successful in carrying out reforms
Taras Kuzio

Western media coverage of today’s Ukraine has an air of deja vu about it, with striking similarities to reports dating from the middle of Viktor Yushchenko’s presidency. Then and now, a large majority of Ukrainians believe their country is heading in the wrong direction, while Western governments are increasingly demonstrating all the symptoms of ‘Ukraine Fatigue’.

Why is President Petro Poroshenko repeating Yushchenko’s inglorious path? Presidents Yushchenko and Poroshenko actually have a lot in common. Both come from the so-called ‘pragmatic’ and oligarch-friendly wing of the country’s pro-Western national democratic camp. This association with oligarch interests has made them equally unable to fulfil the demands and hopes of the millions of Ukrainians who participated in the Orange and Euromaidan revolutions.

From revolutionary rhetoric to political pragmatism

Poroshenko and Yushchenko are closely associated with Ukraine’s two iconic post-Soviet popular uprisings, but both men also share remarkably similar records for pragmatic political dealings with those they have publicly opposed. Despite being the darling of Ukraine’s reformist camp during the later Kuchma years, Yushchenko opposed President Leonid Kuchma’s impeachment over the murder of journalist Georgiy Gongadze. Many believe Yushchenko never really felt comfortable in opposition or as a revolutionary. Indeed, he eventually allied himself with Viktor Yanukovych and helped bring his former Orange Revolution adversary to power in 2010.

Poroshenko has shown similar political flexibility throughout his career. He has flip-flopped across the entire political spectrum, beginning in the Social Democratic Party (United) before becoming one of the founding fathers of the Party of Regions. He then moved to Yushchenko’s ‘Our Ukraine’ in time for the Orange Revolution. Since Yushchenko’s star faded, Poroshenko has supported Arseniy Yatsenyuk, served in the government of President Yanukovych, and formed an alliance with Vitaliy Klitschko. He has been involved in a dizzying array of political parties without ever putting in the time to consolidate a genuine political movement. In this context, it was hardly surprising to see gas tycoon Dmytro Firtash brag recently in a Viennese court that he helped put Poroshenko into power.

Yushchenko and Poroshenko have acted similarly in two strategically important areas. The first area is in their attitudes towards the regimes they replaced. Both refused to pursue criminal charges against the leaders of the Kuchma and Yanukovych administrations. Instead, they both appointed politically reliable Prosecutor Generals - Svyatoslav Piskun and Oleksandr Medvedko under Yushchenko, and Vitaliy Yarema and Viktor Shokhin under Poroshenko. This reflects perceptions of the Prosecutor General’s office as an institution that primarily protects those in power.

The second similarity between presidents Yushchenko and Poroshenko is that neither of them attempted to change the fundamental rules of business and politics in Ukraine. Even Vladimir Putin managed to change the Russian state’s relationship to the country’s oligarchs soon after his election in 2000. No such process has taken place under any of Ukraine’s five presidents. A newly elected president needs to impose a new approach during his first months in office, with oligarchs and senior civil servants informed that the old days of ‘business as usual’ are over. Given his failure to do this in 2014 or 2015, it is already fair to say President Poroshenko will not now become an anti-oligarch reformer.

The results of these failures are lamentable to say the least. As the human rights think tank Freedom House has pointed out, ‘The key problem is that Ukraine’s new leaders have continued to keep to the rules developed over the past 25 years and perfected in Russia and other kleptocracies. Oligarchs extract wealth from society by pulling the strings in the judiciary, politics and elections, the media, and business. The rules of the game are rigged to keep the money flowing into the pockets of the few, whether they are skimming from state companies, from legitimate businesses, or from the funds of donor governments and international financial institutions.’ These are all ‘symptoms of how the political system has robbed Ukraine of its wealth and left the country mired in inefficiency and corruption.’

Despite two pro-democracy revolutions in the past decade driven by massive popular protests involving up to one in five Ukrainians, Ukraine continues to be a pseudo-colonial country where oligarchs and corrupt officials exploit cheap domestic labour and send their high profits and stolen budgetary funds to European countries and offshore tax havens. According to the Washington-based Global Financial Integrity, an average of at least USD 11.5 billion is exported every year from Ukraine to offshore tax havens such as Panama.

The continued existence of a colonial-oligarchic economy after two anti-oligarchic revolutions is an oxymoron that translates into low levels of foreign investment, poor rates of economic growth and very high levels of corruption. The poor state of Ukrainian finances, a result of massive capital outflows and a permanently large shadow economy, has forced Kyiv to go, cap in hand, to the IMF on nine separate occasions.

Under presidents Yushchenko and Poroshenko, foreign direct investment (FDI) only grew in 2005-2007 during what was a period of robust global growth. FDI has since remained stagnant. Since the 2004 Orange Revolution, corruption levels have not declined. Instead, according to Transparency International, of the 15 former Soviet republics, only three Central Asian countries have worse levels of corruption. No ‘bandits’ have gone to jail under presidents Yushchenko or Poroshenko, despite the popularity of this particular slogan among revolutionary rabble-rousers.

The frustration created by the failures of Yushchenko and Poroshenko creates a dangerously volatile climate. Tension will remain high in Ukrainian society as long as thriving a civil society sector faces oligarch-friendly parties controlling neo-Soviet state institutions such as the Prosecutor General’s office, the SBU, and the judiciary. In this environment, parallel post-Soviet and European societies are able to exist side-by-side. Investigative journalists, activists and genuinely pro-European political forces regularly expose high-level corruption. However, this never leads to criminal charges because political forces block prosecutions. The combination of widespread publicity about corruption, coupled with the absence of criminal charges, generates a tense atmosphere and fuels public anger. This adds to political instability and produces regular eruptions. It is no surprise Ukraine experienced two revolutions in under a decade. Freedom House describes this situation as Ukraine’s ‘national schizophrenia’ where ‘a mobilised and capable civil society and media face off against a system of corruption deeply entrenched in the very mechanisms of the state.’ Freedom House warns that this leads to ‘Ukraine’s profound volatility.’ ‘The enormous and growing gap between what the society demands and what the system delivers is what produces Ukraine’s now-regular popular eruptions.’

What can be done to facilitate Ukraine’s emancipation from this colonial-style oligarchic state capture? First the good news. Ukraine is currently fighting a successful hybrid war against Russia to free itself from a centuries-old colonial relationship. Due to this existential conflict, popular attitudes are changing towards Ukrainian history, religion, and identity, while notions of a fraternal relationship with Russia are coming in for radical reassessment. Before the onset of the Kremlin’s hybrid war, only a minority of Ukrainians held negative views of Russia. Today, a majority of the population is opposed to the Kremlin and ambivalent towards Russia itself. Ukraine’s liberation struggle to rid itself of Russian colonial influence has been successful because it has been a genuine people’s war. Military and civil society volunteers have fought and died for the nation. Nobody fought for the president or his parliamentary majority. Ukrainian society’s ability to mobilize in order to prevent a full-scale Russian occupation bodes well for the country’s long-term future, suggesting a strength of national spirit few had previously anticipated. This grassroots strength is crucial if Ukraine is to confront and defeat the oligarchs.

Now the bad news. Ukraine continues to remain a colony of oligarchs who have captured the Ukrainian state and continue run the country for their personal benefit. The decolonization of the oligarch-captured state can only begin when political forces supporting this oligarchic status quo are no longer in power. For Ukraine to break the cycle of oligarchic control, alternative political forces must come to power who are capable of changing the political and business rules of the game.

Who can conquer the oligarchs?

Currently there are only a handful of political forces potentially capable of liberating Ukraine from colonial-oligarchic rule. Unsurprisingly, their popularity is growing. These include Yulia Tymoshenko’s Batkivshchina, Lviv Mayor Andriy Sadoviy’s Samopomych, and the embryonic political party taking shape around former Georgian President Mikhail Saakashvili. If these political parties win election to the next parliament, they could conceivably create a coalition on a platform of de-oligarchisation. This reality could emerge sooner than many might imagine – there is widespread speculation of preterm parliamentary elections in autumn 2016. If a new vote takes place within the next six-twelve months, Arseniy Yatseniuk’s Popular Front will likely fall short of the threshold, while President Poroshenko’s own bloc will struggle to maintain anything like its current number of MPs. The way would be open for a new set of MPs to approach the challenge of ending the oligarchic stranglehold on power.

Stuck between Soviet past and European future

Presidents Yushchenko and Poroshenko both failed to live up to their revolutionary billing because at heart they were content with a Kuchma-light regime stuck in the twilight zone between the Soviet past and European future. Their vision of Ukraine is of a place where a relatively free media and democratic elections function alongside the absence of the rule of law and continuing oligarchic control. This Kuchma-light system offers a façade of European development but in reality only benefits a small group of elites. In order for the hopes and dreams of two popular revolutions to be realised, Ukrainians should look to the successful policies of their liberation struggle to remain free of Putin’s empire. This same sense of civic activism will be crucial in the struggle to liberate the country from the oligarchic rule that Presidents Yushchenko and Poroshenko have perpetuated.

About the author: Taras Kuzio is a Senior Research Fellow at the Canadian Institute of Ukrainian Studies, University of Alberta. His most recent book ‘Ukraine: Democratization, Corruption and the New Russian Imperialism’ (Praeger, June 2015) surveys modern Ukrainian political history from 1953 to the present. In 2013-2016, he undertook 15 visits to eastern Ukraine and the Donbas conflict zone to research his forthcoming book, ‘Russia’s War Against Ukraine: Nationalism, Identity and Crime’. During three decades of scholarship on Ukraine, he has authored and edited 15 books, guest edited 12 special issues of academic journals and authored over 100 think tank monographs, book chapters, and scholarly articles and published more than 1,400 articles in specialist journals and newspapers.