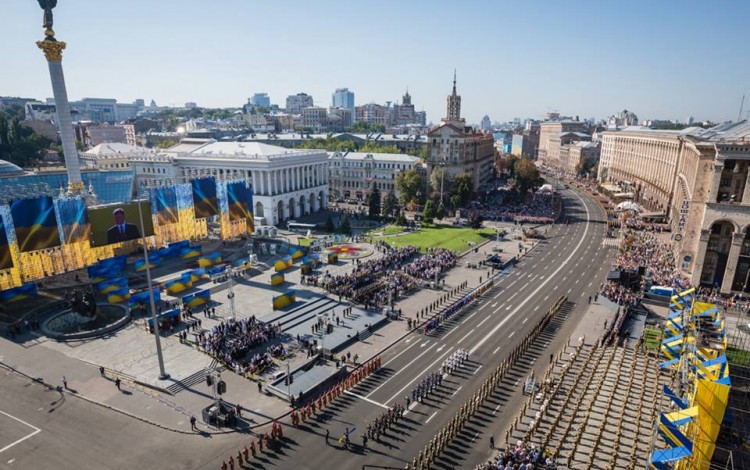 Independent Ukraine turned 24 years old on 24 August. The holiday was marked with a military parade in downtown Kyiv. Similar celebrations took place across the country and among Ukrainian communities worldwide. Ukrainian Independence Day recalls the day in August 1991 when the Ukrainian Soviet Parliament declared independence from the USSR.

Once regarded as an understated and somewhat ambiguous holiday due to the continued post-1991 influence of the Kremlin on Ukrainian domestic affairs, Ukraine’s Independence Day has gained significant stature as a national holiday since the Russian invasion of Ukraine in early 2014. It is now widely regarded as the main holiday on the national calendar, reflecting the growing sense of national identity and patriotic pride that has swept Ukraine since the start of the current conflict with Putin’s Russia.

Ukraine’s ongoing battle against Russian forces and their local proxies in east Ukraine is widely seen by Ukrainians as a de facto war of Ukrainian independence. Moscow’s terms for a settlement of the conflict would effectively deprive Ukraine of its sovereignty and independence, tying the country to the Kremlin indefinitely and preventing any attempts to integrate into the wider European community of nations.

Russian aggression against Ukraine has taken the form of a hybrid campaign involving military, informational, diplomatic and economic elements. As part of the current Russian information offensive, Kremlin leader Vladimir Putin has repeatedly promoted the idea of ‘Novorossia’ or ‘New Russia’ – a region encompassing large swathes of eastern and southern Ukraine which has been earmarked for Kremlin takeover – while also claiming that Ukrainians and Russians are ‘one indivisible people’ with a shared past and share future. Kremlin-controlled media has argued against Ukraine’s historical right to exist as an independent nation, claiming that the country is a manufactured state designed specifically to undermine Russia as a Great Power.

These hybrid Russian efforts to crush Ukrainian sovereignty and deny Ukraine’s existence appear to have backfired disastrously, sparking a determined backlash that has consolidated Ukrainian national identity and united the nation as never before.

The grassroots Ukrainian response to Moscow’s military intervention has been historically unprecedented. This national effort has seen volunteers from every section of society flocking to support the country. Old geographic, ethnic and linguistic barriers have lost meaning as thousands of Ukrainians have joined volunteer battalions fighting against Russian invasion in the east of the country. Meanwhile, millions of ordinary Ukrainians have been involved in broader volunteer efforts to raise money for the country’s defenders and to provide crucial supplies. Similar volunteer movements have sprung up to provide support for the growing refugee community and aid veterans wounded in the conflict.

Opinion polls and surveys also demonstrate a sharp rise in patriotic sentiment. While distrust in the country’s political classes and national institutions remains alarmingly high, pride in Ukrainian national identity is currently at record levels. After over two decades of failed nation-building, it appears that the Russian invasion has succeeded where successive Ukrainian governments have fallen short, and managed to unite the diverse Ukrainian nation.

The fight for true independence will likely continue for a number of years, but Ukraine has never been closer to achieving a breakthrough in its quest to join the community of democratic European nations. 24 years since the 1991 Ukrainian declaration of independence, the post-Soviet generation of Ukrainians is finally within touching distance of achieving a genuinely independent state.