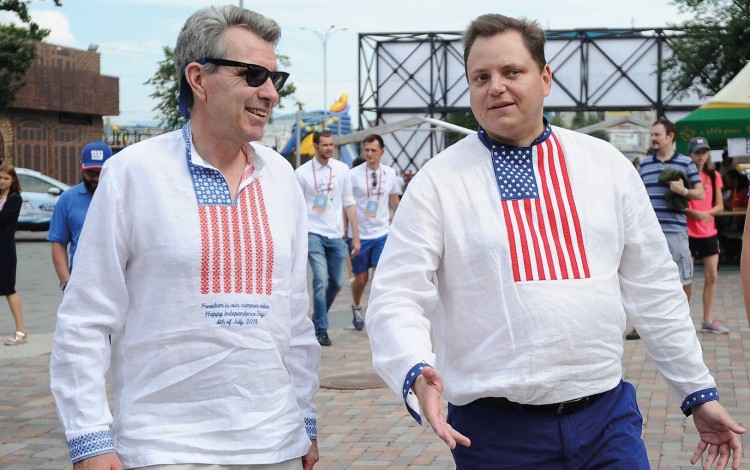 “We’ve got an incredible Ambassador. We’re fortunate to have one of the best that we have in the entire foreign policy establishment,” commented US Vice President Joe Biden when he spoke during the first US-Ukraine Business Forum, hosted by the US Chamber of Commerce in Washington DC across the road from the White House, on July 13, 2015. VP Biden was referring to Geoffrey Pyatt, US Ambassador to Ukraine. This August, Ambassador Pyatt departed from Kyiv after a three-year posting to take on a new ambassadorial role in Athens.

Ambassador Pyatt arrived in Kyiv on August 3, 2013 as the 8th United States Ambassador to Ukraine. His 26-year State Department career has ranged from Asia to Europe and Latin America. From August 2013 until August 2016, the Ambassador found himself in the midst of some of the most turbulent, dramatic periods in modern Ukrainian history.

Ambassador Pyatt contributed greatly to the development of strategic partnership between Ukraine and the United States of America. He made an immense personal contribution to improving the general investment climate in Ukraine, always ready and eager to hear the voice of the business community.

During a meeting last December with AmCham members in Kyiv, Ambasador Pyatt said: “Real reform is happening.  Progress is being made.  In the past year, Ukraine has passed more reform legislation than in all the years prior of this country’s independent history.” This message is worth repeating.

He now heads to Athens, to take on a new role as US Ambassador to Greece.  Ancient Greece is generally seen as the seminal culture that provided the foundation of modern Western culture and is considered the cradle of Western civilization. Most influential were that Greek philosophers. One of the founders of Western philosophy, Socrates, renowned for his contribution to the field of ethics, said: “The secret of change is to focus all of your energy, not on fighting the old, but on building the new.” This is timely advice in light of the massive challenge Ukrainians have taken upon themselves to build a new Ukraine without corruption and based on the principles of rule of law and freedom of speech.

Ukraine’s greatest philosopher, Hryhoriy Skovoroda, whose portrait is found on the largest banknote in circulation in Ukraine, the 500-hryvnia note, wrote in the 18th century: “Everything will be difficult, if there’s no dream.” Today, the people of Ukraine continue to aspire to the Ukrainian Dream, building a new Ukraine, where through hard work and strength of mind, each individual achieve everything in a country free from corruption.

On behalf of the members of the American Chamber of Commerce in Ukraine and the business community, I would like to thank Ambassador Pyatt sincerely for all his support of the business community, especially in the fight against corruption and establishment of the rule of law. We wish the Ambassador and his wife Mary all the very best in Athens, where he will, no doubt, continue to work together with our colleagues at the American Chamber of Commerce in Greece. We look forward to welcoming newly appointed US Ambassador Marie L. Yovanovitch in Kyiv later this month.

About the author: Andy Hunder is the President of the American Chamber of Commerce in Ukraine