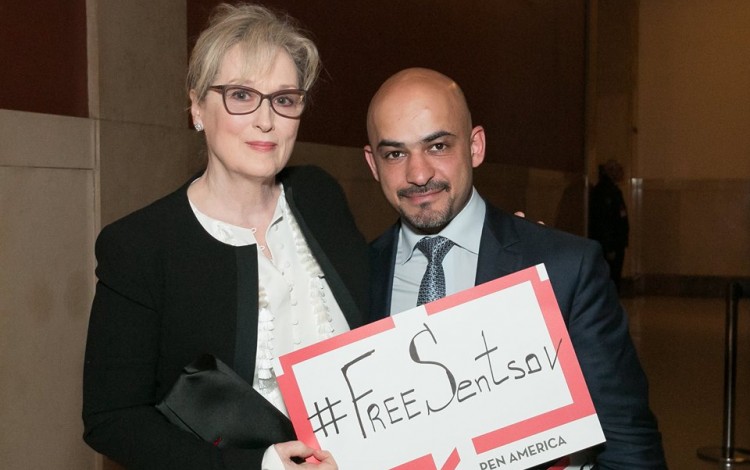 Reformist Ukrainian MP Mustafa Nayyem poses with Hollywood star Meryl Streep during a recent stateside visit. Nayyem is one of a new generation of Ukrainian politicians seen by many in America as the best hope for genuine change in post-Maidan Ukraine
Taras Kuzio

Washington DC policymakers and experts struggle to remember a time when so many Ukrainians visited the American capital city. One jokingly wondered recently whether Ukraine should move its parliament to Washington DC as some Ukrainian MPs seem to spend more time there than in Kyiv.

The financial cost of these visits for Ukrainian taxpayers and party political finances is very high, but it is not clear whether it actually produces any tangible results. The short answer is that in most cases, these trips are probably a waste of time and money. They may even be counterproductive.

Most of the US policymakers and experts I have spoken to in recent months expressed surprise that what they perceive as the old guard of Ukrainian politics continues to dominate Ukrainian affairs. The three most prominently represented Ukrainian political forces in Washington these days are the Petro Poroshenko bloc, the Opposition bloc, and the Yulia Tymoshenko/Batkivshchyna party. All three have unenviable reputations in Washington as old guard political groupings with roots in the 1990s. The messages and rhetoric they convey to the US authorities have not changed much over the last two decades. Perhaps understandably, they now lack credibility.

Many in Washington see President Poroshenko as an oligarch who does not have the political will to fight corruption. One Washington expert told me: “It is very sad for the Ukrainian people that Poroshenko has become the second revolutionary leader who has failed to implement the popular demands of the Maidan.”

The Opposition bloc fairs no better. Ex-President Viktor Yanukovych and his Party of Regions famously spent more on Washington consultants than any other Ukrainian political force, but this considerable investment failed to improve their negative image. This was an extremely difficult task prior to 2014. It has since become impossible.

With regard to Batkivshchyna, one Washington political consultant told me: “Tymoshenko has courted the last four US presidential administrations but has not managed to change how Washington views her. She continues to be seen as an opportunist and a political chameleon whose views and alliances change with the wind.” Nobody in Washington knows what she really stands for. Another Washington political consultant offered further detail: “Knowledgeable regional experts in Washington voice serious concerns about Tymoshenko's past energy deals with Moscow and view her populist rhetoric with extreme caution. Her stunt at this year's National Prayer Breakfast (where she cornered US President Donald Trump and received assurances from him that Washington would not lift Russia sanctions) was frowned upon by the US expert community as a perfect example of her penchant for grandstanding.”

There is a sense of frustration and dismay in Washington that old guard figures like Poroshenko, Tymoshenko and the Opposition bloc’s Yuriy Boyko continue to lead opinion polls for a hypothetical Ukrainian presidential election. Given Ukraine’s very active civil society and relatively independent media environment, Washington policymakers and experts are surprised and disappointed at the absence of new faces. Many had hoped to see unsullied political leaders emerge following the Euromaidan Revolution who could then win power in upcoming parliamentary and presidential elections.

It seems that the considerable resources Ukraine’s establishment politicians are spending on their many Washington charm offensives is a complete waste of money. US political consultants and lobbyists will promise foreign clients anything in order to obtain contracts, but in practice, they are unable to change the image of Ukrainian politicians seen as members of the old guard. US consultants do not have the requisite magical powers to make their clients younger or erase their unsympathetic political baggage!

Do any Ukrainian visitors still have the ability to impress Washington DC insiders? The answer is yes. Popular Ukrainian visitors currently include untainted younger politicians such as MPs elected in 2014, leaders of civil society NGOs, and independent journalists. This new generation enjoys levels of credibility that the politicians of the pre-Euromaidan Revolution generation cannot match, no matter how much money they throw at Washington political consultants and lobbyists.

There is considerable hope in Washington that new faces from the Euromaidan Revolution and Ukraine’s civil society will emerge in the next few years during the coming round of presidential and parliamentary elections. There is a widespread feeling in the American capital that Ukraine’s Europeanisation is reliant upon the victory of new faces. A Ukraine that remains dominated by the old guard will be destined for the geopolitical twilight zone, with one foot in post-Soviet Eurasia and one foot in Europe.

Washington policymakers and experts have three key pieces of advice to Ukrainian politicians. Firstly, do not visit us so often. Secondly, we thank you for investing in our economy but we should warn you that political consultants and lobbyists will not succeed in changing our view of Ukraine’s old guard.  Thirdly, we say a resounding “no” to Poroshenko, Tymoshenko and Boyko, but “yes” to the new generation of Ukrainian politicians.