Zelenskiy’s election win was a vote for fundamental change – but can he now deliver? 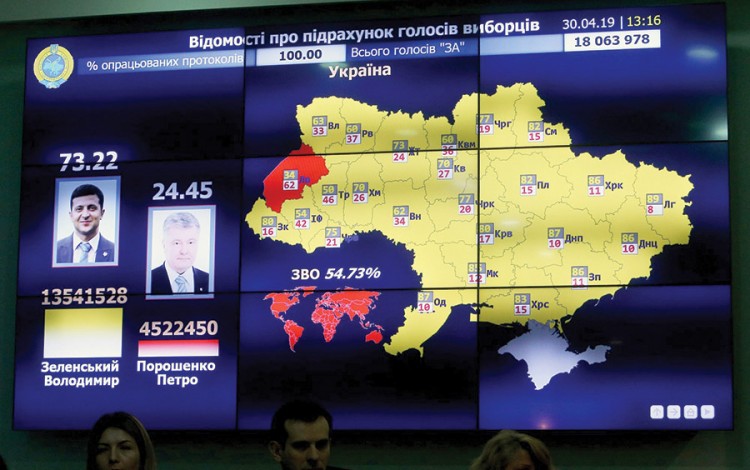 Ukraine’s highly competitive recent presidential election illustrated that Ukrainians can create the necessary conditions for a free and fair vote. This resulted in a “moment of truth” for the country’s entire political class, and the verdict delivered by voters was resoundingly negative. Establishment outsider Volodymyr Zelenskiy’s landslide victory was an expression of the continuing hope for transformational change shared by millions of Ukrainians across the country. They are clearly tired of the country’s unfulfilled potential and hungry for a new reality, both in the spheres of politics and economic activity.

Ukraine now finds itself at the crossroads once again and looking to translate the political progress of free and fair elections into more broad-based societal gains. The economic benefits generated within free societies come to fruition when individual political freedom is respected and guaranteed. Unless the rule of law guarantees individual political freedoms, there cannot be any authentic economic freedom. Now that there has been an explicit articulation of political freedom in Ukraine, the challenge is to work towards the establishment of a fair and free market buttressed by the fair application and efficacy of the rule of law.

Even after five years of post-Maidan reform efforts, corruption remains the most critical and unresolved domestic issue. The ongoing problem of corruption prevents economic growth. As one World Bank representative suggested recently, failure to cure the malady of corruption costs Ukraine at least 2% in annual GDP growth, if not more. The majority of Ukrainian voters clearly understand this. While many would confirm that change has indeed taken place since the 2014 Revolution of Dignity, there is a sense of not nearly enough done to improve the everyday lives of ordinary Ukrainians. The presidential election result reflects this desire for a more fundamental shift in the way the Ukrainian state functions.

This is particularly relevant with regards to small and medium-sized businesses (SMEs). Transformations at the level of national government can lead to greater integrity in the overall business sector. This has the potential to transform the culture of daily business practices, especially for SMEs, traditionally the fastest job and wealth creators in emerging economies. Furthermore, a demonstrable commitment to the rule of law would create greater confidence in Ukraine among foreign investors. It would establish a foundation for economic opportunity and provide the basis for greater dignity in daily life. Perhaps it would even prevent the outflow of Ukrainians leaving the country to seek their livelihood abroad in jurisdictions that offer an economically stable and predictable lifestyle based on the rule of law.

The desire for change is evident all over the country. During a forthright discussion on the eve of the country’s recent presidential vote, the Mayor of Nikipol in southern Ukraine spoke candidly about the inability to protect investments in the current business and political climate. As mayor of a relatively small provincial city, he is experiencing significant economic migration. Asked to outline the challenges he faces in creating an attractive and competitive business climate, he cited potential “raider” attacks on new and growing businesses alongside attempts to extract “rents” from new investment projects. He also spoke of the inability of government officials to guarantee a fair and effective legal framework capable of protecting investor interests. A former entrepreneur himself, he is all too aware of the important role such guarantees play in fostering business confidence.

Similarly bleak assessments are commonplace among the Ukrainian business community and fundamental questions abound. Why is it so complicated to take legal action over defamation in the media? How can businesses be sure of the integrity of evaluations they receive related to property and equipment? Why do Ukrainian businesses have to seek dispute resolution in foreign courts outside the jurisdiction in which they operate?

These are just some of the many issues the new president must address if he is to live up to the expectations of the electorate. These expectations reflect an appreciation that free societies develop and ultimately thrive because they rest upon an agreed to and mutually accepted set of core values. These principles include social justice, trust, transparency, and the expectation of a fair return on investment. This also means the assumption of an effective legal system that has the integrity to settle disputes justly. While the specifics may differ from person to person, the rule of law is central to virtually every vision for a new Ukraine.

Volodymyr Zelenskiy won the presidency by a wider margin than any previous Ukrainian head of state, giving him an unprecedented mandate for change as he takes office. The Ukrainian electorate has made clear its desire for a fresh start and a new direction. Zelenskiy must now build on the momentum of his overwhelming victory to initiate the transformation that the country is waiting for.

About the author: Yuri Polakiwsky is a writer and political commentator who resides in Kyiv. He is the author of the book “Ukraine - a Lament of a Promise” and a member of the Association of Ukrainian Writers and Poets