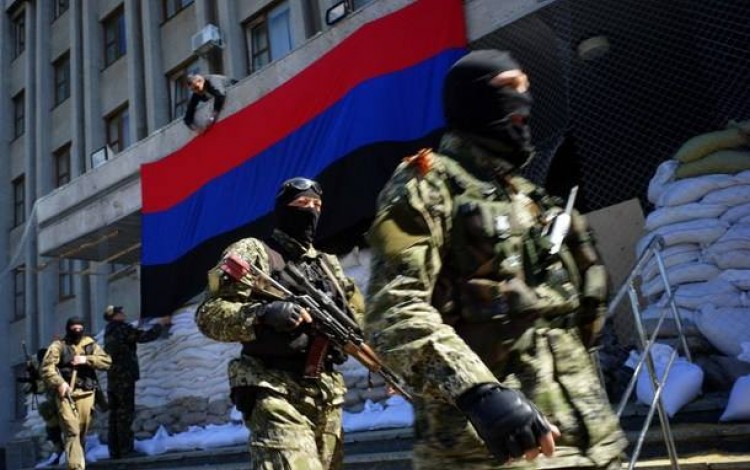 The Wall Street Journal has published a report citing an unnamed Russian Ministry of Defense official confirming the presence of Russian army forces inside Ukraine. The revelations fly in the face of 18 months of consistent denials from the Kremlin. Moscow has repeatedly claimed that no Russian army forces have be deployed inside Ukraine despite widespread evidence to the contrary. These Russian denials have been central to the Kremlin-promoted narrative that the conflict in Ukraine is a civil war and not an act of Russian aggression.

The Wall Street Journal article, published on 23 October, focused on the redeployment of Russian Special Forces troops from Ukraine to Syria, and quoted an unnamed Russian Ministry of Defense official discussing the redeployment from east Ukraine in strikingly matter-of-fact manner.

'Russia has sent a few dozen special-operations troops to Syria in recent weeks, Russian and Western officials say, redeploying the elite units from Ukraine as the Kremlin shifts its focus to supporting Syrian President Bashar al-Assad.

Russia in late September launched a campaign of airstrikes in support of Mr. Assad’s government, and President Vladimir Putin has said Russian troops won't play a role in ground combat. But Russian military experts and officials say small numbers of special-forces units—whose missions are rarely acknowledged publicly—are also on the ground in Syria.

“The special forces were pulled out of Ukraine and sent to Syria,” a Russian Ministry of Defense official said, adding that they had been serving in territories in eastern Ukraine held by pro-Russia rebels. The official described them as “akin to a Delta Force,” the U.S. Army’s elite counterterrorism unit.

The Kremlin has long denied that its military forces, including special-operations troops, have been deployed in eastern Ukraine—as U.S. and other Western military officials have asserted.

But after the annexation of the Ukrainian region of Crimea last year, Mr. Putin acknowledged that Russian special-operations troops in unmarked uniforms, who became known as “little green men,” had helped secure the peninsula.’

These latest Wall Street Journal claims will add to an already large body of circumstantial evidence pointing to direct Russian military involvement in the east Ukraine conflict. The official Kremlin position is that any Russian nationals fighting in east Ukraine are volunteers. A recent forum for Russian veterans of the east Ukraine conflict held in Moscow put the figure of Russian combatants in the 2014-15 conflict at between 30,000 and 50,000, but this figure does not include serving Russian army troops. Regular Russian army soldiers are widely believed to have been deployed to east Ukraine in significant numbers to undertake training, command and battlefield roles after having first removed all identifying insignias.

Ukrainian officials and Western intelligence agencies, together with a range of independent journalists and local eyewitnesses, have all provided evidence to support claims of direct Russian military involvement. This evidence includes testimonies from self-identifying Russian soldiers captured in the combat zone, eyewitness accounts of Russian army columns moving across the Ukraine-Russia border, confessions from Russian officers conducting training of insurgent forces in east Ukraine, and the presence of sophisticated Russian-only military hardware in the east Ukraine conflict zone. The Kremlin has admitted that some of those captured are indeed former Russian army personnel, but has claimed that they resigned immediately prior to deployment in east Ukraine.

These Russian claims have been met with increasing levels of disbelieve. Despite initial caution among many in the international community, few are now prepared to pay lip service to continued Kremlin denials. The latest round of EU sanctions unveiled in early 2015 specifically sanctioned members of the Russian military hierarchy for their role in conducting military operations in east Ukraine, while the OSCE observer mission has recently highlighted the presence of high-tech Russian-only military equipment in the combat zone. Meanwhile, Western leaders have long spoken openly about the Russian military presence in east Ukraine, brushing aside Russian denials without reference.

There has been much media speculation over Vladimir Putin’s seemingly novel ‘hybrid war’ tactics in Ukraine, which have included the use of unmarked military equipment and Russian army troops without identifying emblems or insignias. In reality, these are long established Russian tactics. The only reason Russia has succeeded in catching the West by surprise is the fact that the Western intelligence community has paid so little attention to the Kremlin since the fall of the USSR. Old-school Kremlinologists have retired quietly, while the new generation of intelligence officers has been relatively clueless as to the smokescreens and deceptions typically employed by the Kremlin.

In reality, Russia’s so-called hybrid war tactics are nothing new. Moscow actually has a long history of deploying Russian troops in a stealth capacity to serve as unofficial invasion forces. Speaking to Reuters news agency in late October, former Soviet serviceman Valery Anisimov explained how he had been deployed to Syria in the early 1980s under similar circumstances. He was among a shipload of troops sent to the Middle Eastern country and told to pose as tourists. They grew their hair during the voyage and swapped their Red Army uniforms for civilian clothing. “We didn’t call each other ‘Comrade Major’ or ‘Comrade Colonel’. We greeted each other by name and patronymic, so no one would know we were Soviet officers,” the Reuters report quoted Mr. Anisimov as saying.

Unidentified Russian troops disguised as locals are believed to have fought in foreign conflicts for decades, providing the Kremlin with geopolitical influence while at the same time providing plausible deniability in the event of setbacks. There are reports of such hybrid war tactics used in the 1920s in Mongolia, in the 1940s in the Baltic States and throughout Eastern and Central Europe, and more recently in Chechnya and Georgia. Ukraine is actually the latest in a long line of such undeclared wars fought by unidentified Russian troops.

In order to address the threat posed by Russia’s hybrid war tactics, the international community needs to address how it defines military aggression. If removing uniform insignias and painting over identification codes on vehicles is sufficient to deceive international intelligence agencies, then there will be little to prevent Russia employing the same tactics elsewhere in the region in places like Kazakhstan, Belarus and the Baltics.