THE STRUGGLE FOR UKRAINIAN INDEPENDENCE

1917 CENTENARY: Time to remind the world of Ukraine’s first war of independence 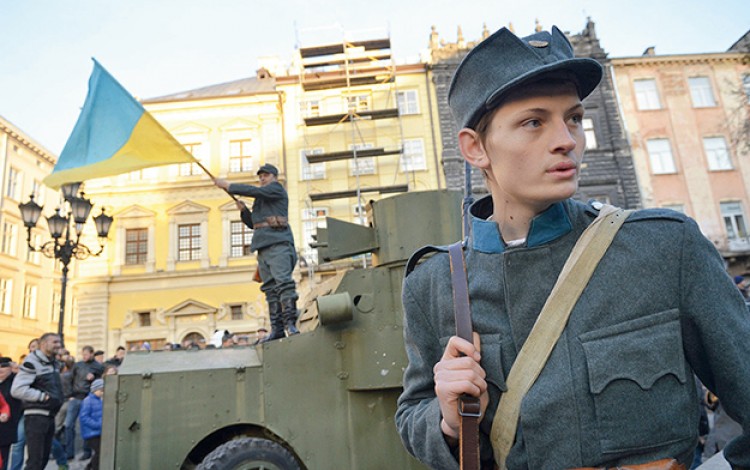 Lviv activists recall events from the failed 1917-21 Ukrainian independence bid. Few outside of Ukraine are familiar with the length of the country's struggle for independence - the 2017 centenary is a great opportunity to raise awareness
Business Ukraine magazine

The coming year will see a torrent of international media coverage focusing on the centenary of the Russian Revolution. Ukraine should take advantage of this media spotlight to remind the world that 2017 is also the hundredth anniversary of the first modern attempt to establish an independent Ukrainian state. This would improve international understanding of the current hybrid war with Russia, which many in Ukraine regard as merely the latest chapter in a much longer struggle for independence.

The conflict that engulfed the Russian Empire in the wake of the Bolshevik Revolution was decidedly international in character. Nevertheless, historians have chosen to call it the Russian Civil War. This misleading title is typical of the Russocentric bias found in most histories of the region. In reality, much of the conflict took place outside Russia, with Ukraine serving as the primary battlefield. Combatants included Ukrainians, Poles, Czechs, French, British, Germans, and Americans. The many opposing sides championed a dizzying array of national interests and competing ideologies ranging from Bolshevism and Tsarist monarchism to socialism and anarchy. Amid the bloody confusion of the campaign, Kyiv changed hands more than a dozen times before the Red Army eventually emerged as the winners.

The victory of the Bolsheviks was to prove one of the most decisive events of the twentieth century. At the time, many feared it would be the catalyst for global revolution. While this international uprising never quite happened, the Bolshevik triumph did pave the way for seven decades of Soviet rule and set the stage for both WWII and the Cold War. Given the historical importance of the Bolshevik success, it is hardly surprising that Ukraine’s own 1917-21 struggle for independence garners little international attention. At best, it appears as a footnote within the bigger Bolshevik story. This creates an incomplete picture of the period and distorts our understanding of modern Ukrainian history. Indeed, it actually fuels many of the myths underpinning the Kremlin’s ongoing international information war against Ukraine, such as the notions that Ukraine is an artificial state and was historically always part of Russia. The success of these information attacks is highly dependent on outside ignorance of Ukrainian realities. By raising international awareness of the country’s long-standing independence ambitions, Ukraine can help to defuse Russia’s information arsenal.

Ukraine’s 1917-21 bid for independence is infinitely more sellable that the subsequent WWII-era insurgency which currently dominates Ukraine’s independence narrative. The present emphasis on Ukraine’s WWII experience has served to undermine sympathy for Ukraine’s broader independence struggle, tainting it with the toxicity of fascist collaboration and genocide. Foreign audiences regard the Nazi associations of Ukraine’s WWII insurgents as completely unacceptable, and there is zero international interest in debating the many nuances of the issue. The veneration of Bandera is a self-defeating exercise that has done much to isolate and weaken the country. It polarizes and radicalizes domestic opinion while serving to horrify and repel many potential international allies. Predictably and tellingly, the Russian media never misses an opportunity to exploit the issue in order to undermine outside support for Ukraine and aggravate internal divisions. In this sense, Bandera is the most counter-productive national icon imaginable.

The 1917-21 Ukrainian War of Independence does not suffer from the kind of stigma attached to the WWII vintage. In an historical context, its main problem is obscurity. Ukraine’s early twentieth century independence bid does not fit neatly into a clear and concise narrative. It was a complex and ultimately doomed enterprise involving various different declarations of independence and a number of different governments. Leaders and international alignments changed with the seasons as Ukraine’s fate ebbed and flowed with the tides of war. Atrocities and betrayals tarnished the ideals of independence. Failure inevitably led to exile and recriminations. And yet this tumultuous period laid the seeds for the sovereign Ukraine that would emerge in 1991. The international borders envisaged by the fledgling state of 1917-21 broadly resemble the 1991 outline. State symbols like the trident and the national flag entered the public consciousness and never left. The Ukrainian independence struggle also forced the Communist authorities to grant concessions to Soviet Ukraine. While the autonomy offered by the Kremlin in the early 1920s was largely cosmetic in nature, it would go on to play a crucial role in the eventual collapse of the USSR. In other words, today’s independent Ukrainian state is a direct descendant of the failed bid of 1917-21.

How should Ukraine mark the centenary of the country’s first major independence bid of the modern era? A series of public events and information initiatives would help to generate interest both domestically and internationally. Teachers House in central Kyiv should be one of the focuses of any centennial event calendar. This majestic building served as the seat of Ukraine’s first parliament and should rightfully be one of the most important landmarks in the Ukrainian capital. Instead, it is currently in everyday use as a venue for sundry lectures and educational activities, while housing an extremely modest permanent collection dedicated to the historic events of the early twentieth century. It would make much more sense to transform the entire building into an interactive museum dedicated to the 1917-21 independence struggle. It could then become the centerpiece of a wider national program. Anniversary events would necessarily span over the coming four years, serving as regular reminders that the idea of an independent Ukrainian state has deep historic roots. At a time when Ukrainians are once more fighting – and dying – for their country’s independence, this message has never been more pertinent.