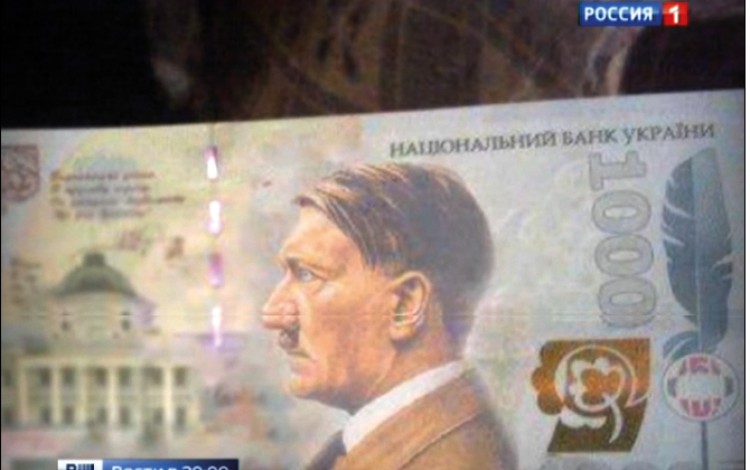 Ukraine's new 'Hitler' banknote: one of many fakes promoted by Kremlin TV in 2015
Business Ukraine magazine

The Reality: Apparently the source of this fake news story was a photo-shopped banknote that was originally posted in the humour section of a Russian website. The fake was based on a genuine design proposal for a 1,000 hryvnia banknote – but the original design featured a portrait of Ukrainian author Panteleimon Kulish, not the German WWII dictator.

Comment: The Russian media likes to depict Ukrainians as Nazi-style fascists and are clearly prepared to use any opportunity to do so – even when the source is obviously dubious. This was merely one of numerous fake stories to appear in the Kremlin media in 2015 seeking to portray Ukrainians as Nazis.

The Claim: Russian news agency Sputnik reported on 27 November that French representative at NATO Jean-Baptiste Mattei had ‘harshly’ condemned the downing of a Russian Su-24 jet by the Turkish military.

The Reality: Mattei himself refuted and mocked the Sputnik report. He commented on the official twitter page of the French Mission to NATO: “I discovered with surprise the article by the Sputnik news agency today, according to which I recently ‘made a harsh speech’ against Turkey. The remarks that Sputnik is attributing to me are pure fiction.”

Comment: Twisting the words of foreign officials is a favourite trick of the Russian media. Often this involves ‘mistranslations’ that conveniently support Kremlin narratives. It was significant in this instance to see the official in question personally refute the comments attributed to him.

The Claim: On 22 October, Russian TV channel Zvezda posted a report on its website claiming Ukrainian Prime Minister Arseniy Yatsenyuk had accused Batkivshchyna Party leader Yulia Tymoshenko of sexual harassment. The story was attributed to an alleged interview given by Yatsenyuk to the Russian service of Radio France internationale (RFI).

The Reality: The RFI Russian service immediately denied producing any such report and condemned Zvezda for making up the sexual harassment story and attributing it to RFI.

Comment: This is an example of the way Russian media seeks to discredit Ukraine by belittling its politicians. The nature of this attack is typical of the Kremlin taste for tabloid sexual scandal – a tactic designed to make fakes as appealing as possible to wider audiences who might be bored by more complex disinformation. Attributing stories to respected international media outlets is also a popular tactic designed to give Kremlin fakes added credibility.

The Claim: In July a number of Russian media outlets including Russia Today, Tass, Ria Novosti, Zvezda, and Sputnik News reported the discovery of American surface-to-air missiles in a Luhansk airport storehouse. The claims were based on a video of the alleged discovery.

The Reality: This was a particularly poorly staged fake. The weapons had clearly not been manufactured in the U.S. and featured numerous spelling mistakes and other irregularities. Interestingly, some of the mistakes can also be found in the computer game Battlefield 3, suggesting that the fakers had created their ‘American’ missiles using the game as their template.

Comment: This was another transparent attempt to implicate America in the east Ukraine conflict. It appears to have involved considerable amounts of preparation including the production of fake missiles and fake packaging. The incompetent manner in which this fake was executed points to the casual approach the Russian media adopts towards fabricated news stories.

The Reality: BBC journalist Natalia Antelava decided to investigate these claims and produced a detailed report. She visited the local morgue, spoke to local residents and attempted to find any evidence of the deceased child. Eventually, she was able to speak to one of the Russian journalists who had reported the death. He told her that the girl did not actually exist and admitted he had been forced to report this fake story.

Comment: Atrocity propaganda is a common feature of Russia’s Ukraine coverage. Such claims generate strong emotions and make it easier to demonize the Ukrainian military. This BBC report was one of the first instances of a leading international media outlet investigating a specific Kremlin media claim and exposing it as a fake. It was a watershed moment in the information war and highlighted the role played by Russian disinformation in fuelling the conflict.