ALL ROADS LEAD TO KYIV: It's time for isolated Ukrainians to bridge regional divides and discover the rest of Ukraine 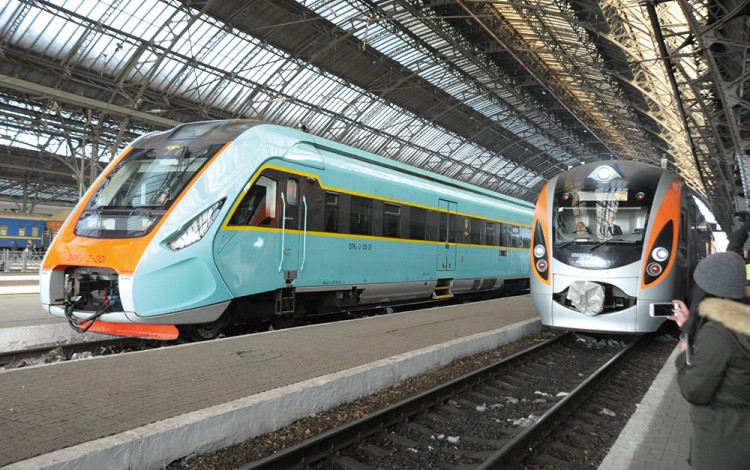 Ukraine has one of Europe's most extensive rail networks but the vast majority of routes still connect regional cities to Kyiv. This makes region-to-region travel both time-consuming and unappealing
Michael Druckman

One of the biggest victories scored by the Ukrainian government this year was the approval of comprehensive visa liberalization with the European Union. Thanks to this measure, Ukrainians have entered into a new phase in their relationship with the EU and can now travel throughout Europe without visas for the first time in the country’s history.

This a huge milestone in Ukraine’s post-Soviet progress. For the past quarter of a century, a combination of the visa barrier and low incomes had helped to create a de facto iron curtain that prevented most Ukrainians from moving freely throughout the rest of Europe. Although technically possible, international travel remained tantalizingly out of reach for large numbers of Ukrainians.

A recent nationwide survey carried out by the International Republican Institute (IRI) and Global Affairs Canada (GAC) highlighted the astonishingly low numbers of Ukrainians who have actually visited the EU. The poll revealed that very few Ukrainians have traveled to neighboring European countries over the past five years. In 11 of Ukraine’s largest cities, more than 89% of respondents have not traveled to Europe since 2012. Only seven Ukrainian cities boasted more than a quarter of residents who had visited Europe at least once in the past five years. This reflects the difficulties mot Ukrainians have had in experiencing the EU firsthand, and illustrates the importance of the recent visa-free agreement. The removal of the visa barrier will broaden horizons and help Ukraine to build bridges with the rest of the continent.

Travel is one of life’s most powerful experiences. There is little doubt that visa-free EU travel will change Ukrainian perceptions about Europe and make an impact on the way they see themselves. Ukrainians could also benefit in a number of ways from greater domestic travel. The recent IRI/GAC survey found that surprisingly few Ukrainians had traveled within their own country. This lack of interaction between different regions fosters a sense of isolation and feeds stereotypes that encourage distrust and political divisions. As Ukrainians rush to get their biometric passports and book tickets to EU destinations, it worth considering the importance of fostering greater interconnectivity within Ukraine itself.

Predictably, Ukraine’s most seasoned EU travelers are located in the western region of the country, which is the area geographically closest to the rest of Europe. The survey found that residents of Uzhgorod in Ukraine’s physically isolated westernmost region of Zakarpattia rarely visit any other region of Ukraine except Kyiv. This is largely due to the physical barrier posed by the Carpathian mountain range on the city’s eastern side, and the limited travel infrastructure connecting the region to the rest of Ukraine. Residents of Uzhgorod are more likely to travel to European destinations than other cities in Ukraine. Just over 35% of city respondents reported traveling to the European Union at some point during the past five years. This is perhaps unsurprising considering the fact that Uzhgorod city residents can literally walk into the EU via the shared border with neighboring Slovakia.

Some of the more interesting findings regarding Ukraine’s regional disconnects came from respondents in the center of the country. Chernihiv and Sumy are the capitals of neighboring oblasts (regions), but residents of these two cities seem to ignore each other completely while moving in opposite directions. Chernihiv residents travel primarily to Kyiv, while Sumy residents tend to go east to visit and conduct business in Kharkiv. Clearly, this corner of Ukraine has more diverse and divergent views than its geography would lead one to believe.

The survey indicates that Ukraine’s southern and eastern regions participate in even less travel to other parts of the country, but they do tend to interact more with each other. Whereas Sumy and Chernihiv go their separate ways, residents of neighboring Mykolaiv and Kherson in southern Ukraine travel between the two cities far more. For southern Ukraine in general, Kyiv and Odesa remain the most visited cities. Meanwhile, those from the south who had travelled to western Ukraine were most likely to visit Lviv.

All Roads Lead to the Capital

There are numerous reasons why the travel pattern picture in Ukraine varies so much from region to region. In terms of European travel, the obstacles have long been obvious. The strict visa regime for the Schengen zone, prohibitive costs, and a lack of decent rail connections have all played major roles in preventing large numbers of Ukrainians from exploring the EU. As for travel within Ukraine, it is often difficult for Western audiences to appreciate the difficulties involved in traveling within the country. One cannot assume that travel between cities in Ukraine is akin to driving from Munich to Frankfurt or catching a flight between Chicago and New York. In Ukraine, all roads quite literally lead to Kyiv, as do all virtually rail and air routes. Travelling from Mariupol to Lviv, for example, requires switching trains in Kyiv halfway with a total travel time of almost 30 hours. Flying from Uzhgorod, located on the doorstep to the EU, over the Carpathian Mountains to Kyiv means catching a small Soviet-era prop plane that departs once a day.

With the passage of visa liberalization for Ukraine, the future of European travel is immediately much brighter. However, considerably more work needs to be done to improve domestic infrastructure if travel within Ukraine is to improve. InterCity express trains are currently doing a brisk business servicing large cities like Kharkiv, Dnipro and even the Donbas, with a line to passing through Slovyansk and Kramatorsk. This service could expand to link up Ukraine’s regional capitals to each other.

Driving from region to region in Ukraine is an unappealing proposition due to the country’s notoriously bad roads. While the poor condition of the Ukrainian road network remains a disaster for much of the country, there is reason to hope that Ukraine’s ongoing fiscal decentralization will incentivize road improvements at the local level. This would make a huge difference to the country’s interconnectivity while also boosting regional economies.

Air travel is another area where greater intercity connections could prove a big hit. New discount airlines will make their presence felt this summer and autumn as Ukraine’s air travel sector continues to open up for new and existing carriers. For example, WizzAir is slowly expanding its Ukraine services. With RyanAir on its way into Boryspil International Airport, more options are steadily arriving to take advantage of Ukraine’s new openness with the rest of Europe. Developing regional airports will be the next big challenge. This represents a huge opportunity for investment, as cities like Mykolaiv, Khmelnytskiy and even Zhytomyr actively look at plans to modernize their Soviet-era municipal airports. Better airport infrastructure will attract more budget airlines offering access to the EU. It could also encourage the development of city-to-city domestic flight services at low rates.

Finally, a new commercial ferry service on the Dnipro has begun to build better connections between the cities of Chernihiv, Kyiv, and Dnipro. The southern port city Kherson will soon join this list. Ukraine’s mighty rivers are a great way to bring the country together. Much more could be done to utilize the potential they offer.

The future development of Ukraine lies not just in improving links with Europe but also in creating the conditions where Ukrainians interact with other parts of their own country. There is no better counter-propaganda tool in the EU’s arsenal than physically showing Ukrainians best practices throughout their own country as well as across Europe. Travel within Ukraine can help forge vital new connections across a variety of industries and sectors, while also dispelling negative stereotypes and strengthening social ties.

To that end, it is critical for Ukraine’s political and cultural development that its residents see and learn from best practices in neighboring cities. If something is achievable in Ternopil, then it can be replicated in Sumy or Severodonetsk, as all municipalities operate under the same broad governing legal framework. The current state of isolation between cities and regions has caused different areas to develop at varying speeds. Creating more transportation hubs with additional regional spokes within the country is a good start to addressing this problem. Promoting study tours, exchanges, and domestic tourism is another.

The opening up of travel to the EU provides a timely reminder of the opportunities to improve linkages within Ukraine itself. This development could play an important role in Ukraine’s own internal reforms and help to foster greater national consolidation.