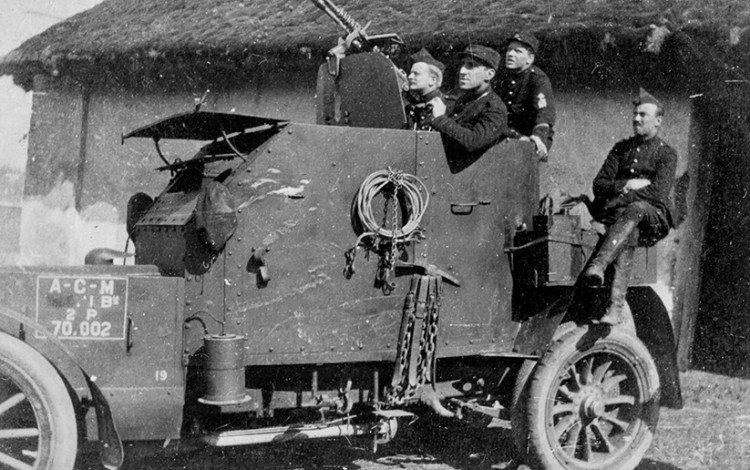 As Ukraine marks the centenary of the country’s WWI-era independence bid, many Ukrainians are becoming acquainted for the first time with the story of this tumultuous period. Throughout the Soviet epoch, all talk of Ukraine’s brief statehood experience was strictly taboo. Even now, relatively few Ukrainians have a detailed grasp of the chaotic events surrounding the attempts to establish an independent Ukraine amid the wreckage of the Tsarist Empire.

With historians now at liberty to delve into this relatively unexplored chapter of European history, a clearer picture of Ukraine’s independence struggle is beginning to emerge. This is helping to place today’s hybrid war with Russia in a far broader historical context, while also bringing to light forgotten episodes of a struggle that has been crowded out of official histories by the global implications of the Bolshevik triumph.

One of the more curious footnotes to surface in recent years involves a group of Belgian soldiers who found themselves caught up in the turmoil of the Bolshevik revolution and Ukraine’s independence bid after arriving on the eastern front at the height of WWI. This is their unlikely story.

In August 1914, Germany declared war on Belgium and German troops invaded the country, sparking outcry across Europe and providing an indignant Britain with justification to enter the fast expanding continental conflict. World War I had begun. The Belgian army finally retreated to the coastal region behind the Yser River, with Belgian troops facing the Germans in opposing trenches. By this point, the first Belgian armoured cars had already seen action in raids behind enemy lines.

Later on in 1914, Major Collon, the Belgian Military Attache in Paris, created an autonomous unit of ten armoured cars, assisted by armed cyclists and motorcycle riders. Major Collon was the first commander of this new unit, known by the acronym ACM (Autos-Canons-Mitrailleuses) and counting about 400 members. These volunteer troops were young Belgians, many well educated and drawn from noble Belgian families. All of them were determined to keep on fighting the German invaders of their homeland. During the first months of 1915, they received training around Paris and paraded along the main boulevards of the French capital.

In the late spring of 1915, the ACM troops moved up to the frontlines on the French-Belgian border. However, due to the nature of the trench warfare on the Belgian Front, the unit could not play any military role. The ACM unit stayed in the rear, where its armoured cars caught the eye of the Russian Military Representative posted with the Belgian army general staff. He informed Belgium’s King Albert I, who had taken command of the Belgian army, that the ACM unit might prove useful on the more mobile eastern front. The Russian military command agreed with this view and after negotiations with the Belgian government, the latter decided to send the ACM to the Russian Empire. The unit was thus effectively a gift from the Kingdom of Belgium to Imperial Russia.

The ACM men made the journey to the Tsar’s empire on board of an old British cargo ship. It was an exhausting passage marked by heavy storms and a lack of food. By mid-October 1915, they disembarked at the port of Arkhangelsk before finally arriving in Saint Petersburg. The highlight of their stay was a parade at the imperial residence in Tsarskoye Selo. On that occasion, the last Russian Tsar Nicholas II climbed into a Belgian armoured car to get a closer look at it from the inside.

In January 1916, the ACM unit travelled by train to Galicia, in those days an eastern border region of the Austrian Empire and now part of western Ukraine. The Belgians spent the winter in the Galician town of Zbarazh. Meanwhile, the ACM unit experienced a change in command, with founder Major Collon replaced by Major Semet. The unit’s new commander began preparing his men for action with tough military drill. In those days, the Galician Front ran north to south along the River Seret in today’s western Ukraine, with Austrian troops on its west bank and the Russian Imperial army on the eastern side. The Ukrainian city of Ternopil was the most important town behind the Russian lines. By mid-1916, the Russian army under General Brusilov was preparing for a major summer offensive in which the ACM Belgians were set to take part.

In the summer of 1916, untold thousands of ill-armed Tsarist Imperial troops died on the battlefield as Brusilov’s massive attack unfolded. Although the Belgians enjoyed better protection in their armoured cars, some also died in what was one of the largest and most devastating offensives of the entire war. The first victim was soldier Jacques de Becker, the son of a Belgian baron and senator. He was shot in the head as he attached a cable to an ACM vehicle that had become bogged down on the battlefield. Jacques de Becker received a military funeral in Ternopil. There would soon be other Belgian graves in Ternopil cemetery. In August 1916, the ACM unit spearheaded a fresh Tsarist attack and Belgian armoured cars beat off an Austrian counterattack at Zboriv railway station in today’s Ternopil Oblast.

The ACM unit spent the winter of 1916-17 in the Ternopil region. The picture of a lonely Belgian soldier, standing amid barbed wire and looking out over a desolate landscape covered up in snow, perfectly illustrates the feelings of many homesick ACM men at this time. Some filed applications asking for repatriation, but these requests did not meet with approval. Instead, the Belgians had to endure shabby barracks, a lack of fresh food, and endless isolation.

Early spring of 1917 brought exciting news. Revolution had broken out in Russia with the Tsarist regime replaced by a provisional government. The Belgians now found themselves confronted with revolutionary changes: Tsarist soldiers refusing to fight any longer and Bolshevik agitators urging them to turn their weapons against the ruling classes. “The red obsession has begun,” an ACM officer noted down in his diary. For the time being, the war against the Austrian and German armies continued with plans for another summer offensive in Galicia. New Russian leader Alexander Kerensky visited the front in the late spring of 1917. When he met the ACM men, he praised them as soldiers of the small Belgian nation that continued the fight against the German enemy. An ACM officer wrote scathingly in his diary, “Magnificent words. But they will soon be forgotten.”

The Kerensky Offensive in the summer of 1917 was a complete failure. At the start of July, the ACM Belgians advanced against the enemy. However, disaster soon struck. One group of Belgian armoured cars came under fire from Austrian artillery in the village of Konyukhy, leaving the crew killed or badly wounded. Zigzagging along the collapsing Tsarist lines, another armoured ACM group ran into Cossacks engaged in attacks on Jewish villages and brutal executions of traitors. With the Russian imperial army on the run, Ternopil fell to the Germans. The survivors of the ACM unit retreated to new positions in villages east of the western Ukrainian town of Zbarazh. For a few autumn weeks, the Belgians were able to enjoy the picturesque surroundings and take photos of the local population. All this changed drastically when Red October dawned and the Bolsheviks seized power in Petrograd. At this point, the Belgian government finally decided to get the ACM unit out of the revolutionary chaos and the Belgians retreated to Kyiv.

The Belgian troops arrived in the Ukrainian capital at a time when it was experiencing the first big upheavals of the country’s independence movement. They would stay in Kyiv until the end of February 1918, witnessing many of the early clashes of an armed struggle for control of Ukraine that would last for several years and see the city change hands more than a dozen times.

While in Kyiv, the Belgians took up residence at a barracks in Svyatoshyn district and at the Myhailivskiy Monastery in the heart of the ancient city. They soon ran out of provisions. The Belgians found a novel solution to this problem: they started producing vodka with improvised equipment and selling it to the local population in exchange for basic supplies.

When the Belgians first arrived in the Ukrainian capital, it was in Ukrainian hands. However, the Central Rada of the Ukrainian independence movement had to cope with a revolt of red workers at Kyiv’s Arsenal Factory while confronting Bolshevik Red Guards approaching from outside the city. The ACM men found themselves caught in the crossfire. They initially took care of civilians who have found shelter at the Mihailivskiy monastery, but when red forces eventually occupied Kyiv, the Belgians move to evacuate. They managed to secure a train from the Bolsheviks and left Kyiv at the end of February. The Bolsheviks had wanted the ACM armoured cars in exchange for passage out of the city, but the Belgians were able to dismantle their vehicles before departing.

The train initially headed north to Moscow but the Belgians became stuck in the neighbourhood of Vologda. Rumours spread that German forces had cut off the northern route to Arkhangelsk. When the ACM staff pushed for this shorter route out of revolutionary Russia, a mutiny broke out. ACM troops refused to head north and instead began negotiating with local Bolsheviks. This dangerous revolt ended when the ACM commander gave in and decided to take the Trans-Siberian Railway to the Far East. It would be a difficult journey. The Siberian winter caught the train and its Belgian passengers in an ice-cold grip, while local Bolsheviks tried to disarm them. They had to force free passage in Omsk and east of Lake Baikal.

However, their adventure was not yet over. Belgian and American diplomats had decided that the ACM men would make excellent material for war propaganda. These Belgian warriors showed the fighting spirit of “Brave Little Belgium” and thus set a good example for the US public as America sought to bolster its own war effort.

Large crowds cheered the ACM men as they marched on parade through various American cities. This military tour began in San Francisco and ended some weeks later in New York. In order to increase the effect of the parade in New York, an impressive American military band was dressed in Belgian uniforms. This band led the march of the ACM Belgians along Fifth Avenue. This military spectacle had the desired effect, with the New York Times reporting: “Vive la Belgique was the cry that greeted the marching Belgians. These brave Belgians looked less like foreign troops than any other allied veterans that have appeared before the American public.”

In mid-June 1918, the ACM unit crossed the Atlantic to France. The unit disbanded in July 1918 following one final parade in Bordeaux. Veterans of the ACM unit continued to reunite for annual meetings in Belgium long after the war. Those who died in 1916-17 at the Galician Front remained buried in Ternopil, their simple graves marked by wooden crosses.

The story of Belgium’s ACM unit is not a tale of heroic warriors. These were simple soldiers on an epic journey set against a vast historical backdrop. It is the story of young Belgians who wanted to fight against the invaders of their fatherland, but ended up crossing the globe instead.

About the author: August Thiry is a writer and lecturer at Thomas More University College Mechelen