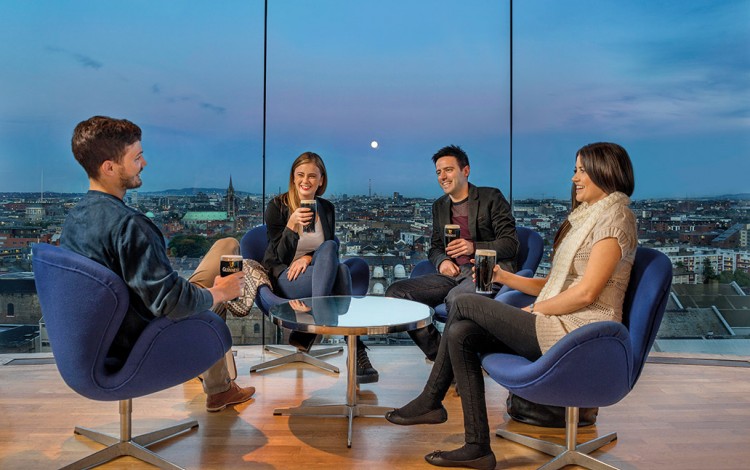 Inspiration for Ukraine: Ireland has reinvented itself over the past few decades as a progressive and innovative society with an investor-friendly economy
Tom O’Callaghan

Ireland’s history shares many similarities with Ukraine. We have also had our famines, foreign imperial rule, struggles for independence, and violent conflict zones. Like Ukraine, Ireland also has a long history of mass emigration. The reversal of this trend in the 1990s helped build Ireland’s famed “Celtic Tiger” economy. As Ukraine seeks ways to stem the flow of citizens seeking opportunities abroad, Ireland’s experience may offer useful insights that could help reverse the current brain drain threatening Ukraine’s future prosperity.

The Republic of Ireland today has a population of 4.6 million, a GDP of USD 294 billion, and Europe’s fastest growing economy. It is the fifth most competitive country in the OECD, and number one in the Eurozone. From an innovation perspective, Ireland has a strong national research ecosystem, with 14 designated priority areas for government funding in research and investment. Ireland ranks tenth out of 127 countries in the 2017 Global Innovation Index. Ukraine can learn from Ireland’s success in a number of areas.

Ireland consistently ranks in the top ten globally for Foreign Direct Investment (FDI). Some analysts point to Ireland’s low corporate tax rate of 12.5% as its primary means to attract investment. Yet, our value proposition goes far beyond this single factor. Long known as “the land of one hundred thousand welcomes”, Ireland leverages its friendliness and the welcoming nature of its people to woo foreign investors. Ukraine’s own impressive hospitality traditions can play a similar role. Our reputation for having a good time, whether on St Patricks Day, over a pint of Guinness, or with a glass of Jameson Whiskey, also translates into business success. Ireland ranks first in the annual IMD World Competitiveness Yearbook for the national culture most open to foreign ideas.

Through “Enterprise Ireland”, a dedicated start-up fund exists to attract foreign start-ups to Ireland. Measured on a per capita basis, Ireland has more venture funding available than in any other country in Europe. Over EUR 800 million is available through seed, venture and angel capital firms.

A critical factor in developing Ireland’s economy was to create quality investment and employment opportunities beyond the capital city and largest population hubs. Ireland has the youngest workforce in Europe. Around 35% of employees are under 25 years of age. Ireland’s investment in education typically far exceeds EU averages. European Commission studies have cited Ireland as producing “the most highly employable graduates in the world”.

Over the past generation, “Institutes of Technology” have appeared in regional towns across the country. Enterprise Ireland promotes 15 so-called “Technology Gateways” within these technology institutes, which combine academic capability with commercial research to serve the needs of local industry. These Technology Gateways focus on a specific niche or speciality, thereby helping strategic regional economic clusters to take shape, allowing talent and investment to flourish.

Another key feature of these Institutes of Technology is the modest size of the cities in which they reside. Cork City, with a population of 126,000 people, is the hotbed for Ireland’s EUR 30 billion pharmaceutical export sector. Galway, with less than eighty thousand people, is the hub for a EUR 2 billion medical device manufacturing sector. Tralee, with less than twenty five thousand people, hosts Ireland’s dedicated electronic and mechanical technology, along with an IoT and data analytics innovation research centre.

Since 2013, these 15 Technology Gateways have helped 900 Irish companies to complete more than 2,000 innovation-based projects. Ireland’s Technology Gateways operate independently within existing state-owned Technical Institutes. Their example could act as a template to help modernise commercial research within Ukraine’s academic institutions while also helping encourage members of the Ukrainian diaspora to return home to pursue their ambitions.

Engaging with the Diaspora

The island of Ireland has a total population just over 6.5 million people, yet the global Irish diaspora numbers 70 million with communities found all over the world. Irish pubs are omnipresent globally. Close on half of all USA presidents claim some degree of Irish ancestry. Even Odesa’s famous Deribaskivska Street is named after a man of Irish heritage. Ireland leveraged its diaspora and emigrant communities during the 1990s to help create its legendary “Celtic Tiger” economy. The government actively encouraged those Irish and their ancestors who had left Ireland to return home to build a new innovation-led economy.

Ireland uses tourism, festivals, and international conferences as a means to showcase the country to investors. Ireland also has a dedicated Minister of State with Responsibility for the Diaspora and International Development. Ukraine’s multimillion diaspora could potentially play a similarly important role in Ukraine’s development.

In the meantime, small steps are already being taken to build upon mutually beneficial trade opportunities and friendship between Ireland and Ukraine. In November, Daniel Bilak, director of the Ukraine investment promotion office, UkraineInvest, has been invited to Ireland to speak at a major economic conference. On behalf of the Irish export promotion agency, Enterprise Ireland, I am happy to engage with Ukrainian businesses interested in Ireland’s Agri-Food, Technology, Cleantech, and Healthcare sectors.

About the author: Tom O’Callaghan (This email address is being protected from spambots. You need JavaScript enabled to view it.) is the Enterprise Ireland Pathfinder in Ukraine. For more information please visit www.enterprise-ireland.com