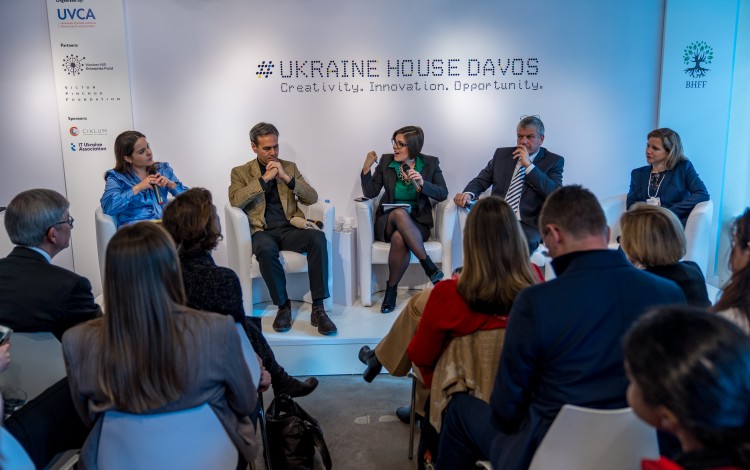 “We are living in a time of bad behavior,” said Ian Charles Stewart, Director of ESH Medias and Co-Founder of WiReD Magazine.  “The only way to change behaviour is through values.”  Stewart was one of four panellists speaking about how to cultivate a more values-based business climate in a fractured world and how to promote social responsibility. The discussion was part of the Ukraine House program at the recent World Economic Forum (WEF) in Davos, and included a focus on what the outside world can learn from Ukraine’s own social awakening during the Euromaidan Revolution.

Moderated by Kadie Ward, Founder of Build Strong Cities and Senior Governance Advisor to international development programs financed by the Canadian Government, the discussion noted that young Ukrainians could serve as an example of how to bring values back into the discussion. “The post-Maidan generation of young Ukrainians were inspired to build the future they want by living according to European values, or rather, shared human values,” says Ward.

The transformation this new generation of Ukrainians is leading, along with a Charter of Human Obligations drafted by Dr. Bohdan Hawrylyshyn, were presented in Ukraine House.  The panellists reached the conclusion that the Charter of Human Responsibilities needs to be drafted and adopted. Ward contends that thousands of young Ukrainians have already committed to this charter and are leading by example. This is something international audiences can learn from, she believes. “The students who stood on the Maidan three years ago are still active in building their communities. They have consciously chosen careers and lifestyles that not only reflect shared human values, but are also building a socially, culturally, and economically responsible society,” says Ward.

A short film co-directed by Ward and created in partnership with the Bohdan Hawrylyshyn Family Foundtion and Fondation Vidrodgenia was premiered during the panel. Premiering at the WEF in Davos was significant because Dr. Bohdan Hawrylyshyn contributed to the founding of the WEF as well as developing the concept of a Charter of Human Obligations. His vision for a global Charter, along with the life choices and example of a new generation of young Ukrainians, have inspired Ward’s campaign to create a Charter of Human Responsibilities.

You can watch the panel discussion online at this link