For centuries much of today’s Ukraine was part of the historically overlooked but hugely important Polish-Lithuanian Commonwealth. Former Polish Ambassador to Ukraine Henryk Litwin explores the impact of this Central European superpower on the development of the region 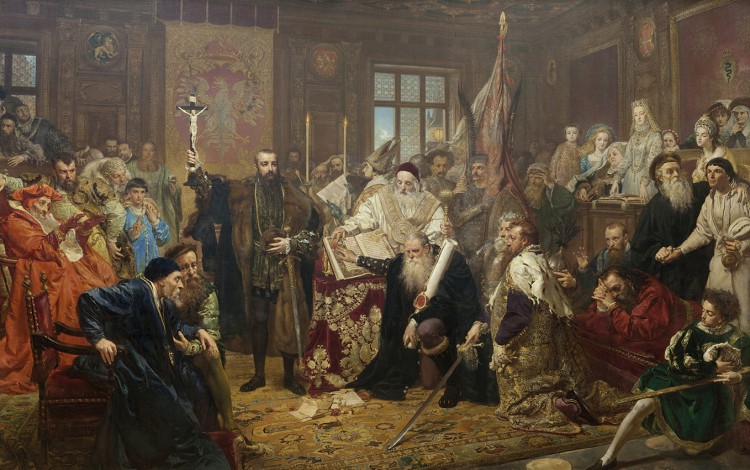 "The Union of Lublin" by Jan Matejko (1869). Photo: Piotr Maciuk/National Museum of Warsaw. This painting is currently exhibited at Lublin Museum
Henryk Litwin

Students of Ukrainian history tend to be preoccupied with the Russian and Soviet roles in shaping today’s national fault lines and frontiers. However, while it remains fashionable to perceive contemporary Ukraine in exclusively post-Soviet terms, there is also a strong argument for adopting a far broader historical perspective that recognizes the influence exerted by a range of other states ranging from the Ottoman Turks to Austrian Habsburgs. None of these influences has been so enduring as the hundreds of years much of Ukraine spent as part of the vast Polish-Lithuanian Commonwealth – Central Europe’s first multinational, multiethnic superpower of the modern era. Business Ukraine magazine invited former Polish Ambassador to Ukraine Henryk Litwin to explore the legacy of this remarkable and often overlooked epoch in European history.

The Polish–Lithuanian Commonwealth was a dualistic state bringing together the Kingdom of Poland and the Grand Duchy of Lithuania, incorporating much of present-day Ukraine and ruled by a common monarch. During the sixteenth and seventeenth centuries, it was one of the largest and most populous European states. At its peak in the early seventeenth century, the Commonwealth spanned some one million square kilometers, with a multiethnic population of about 11 million.

The Polish-Lithuanian Commonwealth has suffered from critical historical assessments for many years. This harsh treatment is due in large part to the fact that the history of the state ended with its partition. As a result, this ignominious ending came to play a decisive role in the official historical narratives of both the partitioning countries and the victims of partition. When viewed from this perspective, the long history of the Commonwealth became primarily a series of events leading up to ultimate defeat. This viewpoint arose from political assumptions and impulses that are not justified by an objective study of the period. The partitioning powers wanted to find justification for their aggression. The Poles themselves searched for reasons to explain their defeat that could help them regain their sovereignty. This made the task facing historians particularly problematic.

Broader European socio-political developments in the nineteenth and twentieth centuries added to these complications. The rise of the modern nation-state began to make itself felt in Poland at the turn of the nineteenth century, significantly earlier than similar processes among Ukrainians, Belarusians and Lithuanians. Understandably, the Poles considered the Commonwealth as a core part of their own heritage, thus failing to take the then-dormant national aspirations of their neighbours and fellow Commonwealth members into consideration. When the Ukrainians, Belarusians and Lithuanians began to develop their own historical consciousness in the second half of the nineteenth century, they generally regarded the Commonwealth heritage as exclusively Polish and therefore foreign.

Given these complex considerations, it is not surprising that the histories of the Polish-Lithuanian Commonwealth have often seemed closer to political populism than academic study. However, the story of the Commonwealth offers valuable insights into the development of a region that has been at the centre of global geopolitical tensions for the past 100 years, from WWI to the present day. In order to have a greater understanding of the issues at stake in contemporary Ukraine, it is necessary to explore the historical realities of the Polish-Lithuanian Commonwealth.

The Polish-Lithuanian Commonwealth came into existence with the 1569 the Union of Lublin between the Kingdom of Poland and the Grand Duchy of Lithuania. The political, administrative and social systems created by this union survived without significant changes until 1791 and the adoption of the Constitution of 3 May. In other words, the Commonwealth existed for 222 years. It is important to place this longevity within the appropriate historical context. The Spanish Empire of the Habsburgs lasted for 184 years (1516-1700), Bourbon France for 200 years (1589-1789), while Tudor and Stuart England existed for a little over 170 years. All of these state systems tend to receive admiring historical assessments, yet all ended amid spectacular calamities that were at least equal to the Partition of the Commonwealth. More recently, the Soviet Union lasted just 70 years, while Hitler’s Third Reich disappeared within 12 years of foundation. Even the sole superpower of the modern world, the United States of America, only passed the Commonwealth’s 222-year mark in 1998. It is therefore reasonable to regard the Commonwealth as an important factor in the development of the European nation states of the modern epoch.

One of the stereotypes hampering a better historical understanding of the Commonwealth has been the belief that the relatively decentralized and democratic political system it employed was an anomaly that developed in isolation to, and in contrast with, the absolutism prevailing elsewhere in Europe at the time. The Commonwealth’s alleged ‘otherness’ is often demonstrated by reference to its electoral throne and all-powerful parliament, which functioned according to the principle of unanimity (liberum veto). However, it is important not to forget that when the Polish-Lithuanian Commonwealth arose there were numerous other electoral thrones in Europe – in Germany, Hungary, Denmark, Sweden and Transylvania, for example. The parliamentary principle of unanimity arose from the federal character of the state and was in many ways its natural consequence. Nor was it entirely exceptional – the States General of the Netherlands relied on a similar approach. Far from being out of step with European history, the Polish-Lithuanian Commonwealth actually played a key early role in developing the doctrine of the primacy of law that would ultimately triumph over absolutism in the nineteenth century.

The triumph of local authority

How is the essence of the Polish-Lithuanian Commonwealth’s political system best described? Different historians have focused on different elements of the system, including the perceived weakness of the executive body, the unusually wide powers held by the Sejm (the parliament), domination of the nobility over all other classes, the absence of a standing army, and the limitations placed on peasant freedoms. However, the foundations of the system lie in the principle of local self-government. Within the Commonwealth, the final authority in all political and administrative issues was the Sejmik (the regional assembly). Each sejmik gathered together members of the local nobility to adopt political directives for the Sejm known as ‘sejmik instructions’. These instructions shaped the agenda in the Sejm. If the Sejm took decisions outside of the framework provided by local instructions (relating to taxation, for example) individual sejmiks could refuse to adopt them. Sejmiks also managed conscription into military departments and elected tax collectors.

The Comonwealth system strengthened the sovereignty of local communities and allowed them to determine the allocation of locally collected state funds, with central government only receiving the remainder. These regional assemblies retained the authority to levy local taxes and oversee the election of local officials. In peacetime, this system proved effective and provided the nobility with a sense of security. However, in times of war it was often ineffectual and unable to cope with the demands for greater financial centralization.

This system evolved thanks largely to an emphasis on stability rather than territorial expansion. Indeed, the Polish nobility would often defy the offensive intentions of the central authorities, whether it was the Livonian plans of Sigismund Augustus, the Turkish War of Stefan Batory, the offensives against Moscow and Sweden of Sigismund III, the Moldavian expansion of Jan III Sobieski, or the anti-Swedish objectives of Augustus the Strong. Territorial expansion generally came via widening the federation at the local level. Prior to the Union of Lublin, a range of lands had joined the Polish Crown with local nobles receiving the privileges of Crown nobility together with their own sejmiks and often featuring local differences in legislation and community structure. From the thirteenth to the sixteenth centuries, this process had embraced much of so-called Red Ruthenia, including parts of present-day Ukraine. Indeed, under the terms of the Union of Lublin, the Grand Duchy of Lithuania maintained a separate form of statehood with its own assets, army, administration, and a completely separate legal system. The union included provisions for a common parliament and foreign policy, but in practice, the Grand Duchy of Lithuania often conducted its own separate international diplomacy. For example, a truce concluded between Lithuania and Sweden in 1626 allowed the latter to launch an attack on Poland.

The 1569 Union of Lublin also led to the so-called ‘incorporation’ of many regions of modern Ukraine that had previously been part of the Grand Duchy. The Kyiv, Volyn and Braclav regions (Voivodeships) received privileges guaranteeing their autonomy within the bounds of the crown, including recognition of noble self-rule, separate social structure and territorial inviolability. It would later become commonplace for Kyiv and Volyn nobles to speak of being ‘in the union’ but not ‘incorporated’.

The Polish-Lithuanian Commonwealth was one of the most diverse multiethnic and multi-confessional states in the Europe of the early modern era. This led to frequent clashes between Catholics, Protestants, and Orthodox believers, but the multi-confessional character of the state remained a core feature throughout its existence. Among the nobility, the Catholics prevailed, but by the latter part of the seventeenth century, the number of Orthodox nobles was also on the rise. The single most prominent symbol of the religious diversity within the Commonwealth was the emergence of Greek Catholicism, which saved local traditions and language by combining elements of Orthodoxy and Catholicism while preserving regional identity. This would go on to play an instrumental role in the nation-building processes of both Ukraine and Belarus.

The Commonwealth also served as a sanctuary at a time of great religious persecution elsewhere in Europe. The early modern period was the age of Europe’s great wars of religion, making the Commonwealth’s relative pluralism particularly striking. Calvinist Frenchman arrived in Poland, along with Dutch Mennonites. Meanwhile, Scottish and Swedish Catholics crossed the continent in search of shelter from Protestant persecution, while Old Believers came from Moscow. This mosaic of confessions also featured an array of religious minorities including Armenians, Jews and Muslim Tatars. The Commonwealth offered official freedom of conscience in religious affairs, with individual groups enjoying their own self-governing authorities and often having their own Crown appointees.

This was the nature of the Commonwealth created by its diverse membership of nationalities – Poles, Lithuanians, Ruthenians (Ukrainians), Prussians, Livonians and many more. The political and legal system derived its authority from the Crown and Kingdom of Poland, but the state relied on social agreement for its continued cohesion. Rather than relying on the unanswerable arguments of conquest, it emerged as an agreement of between ‘the free and the free’. The impact this state had on European history in general, and Ukrainian history in particular, should not be underestimated.

About the author: Henryk Litwin is Ambassador ad personam at the Department for Cooperation with the Polish Diaspora and Poles Abroad within the Ministry of Foreign Affairs of the Republic of Poland. From 2011 to 2016, he served as Polish Ambassador to Ukraine.