INFOWAR CYNICISM: 'Russians know they are being lied to but think West lying too' 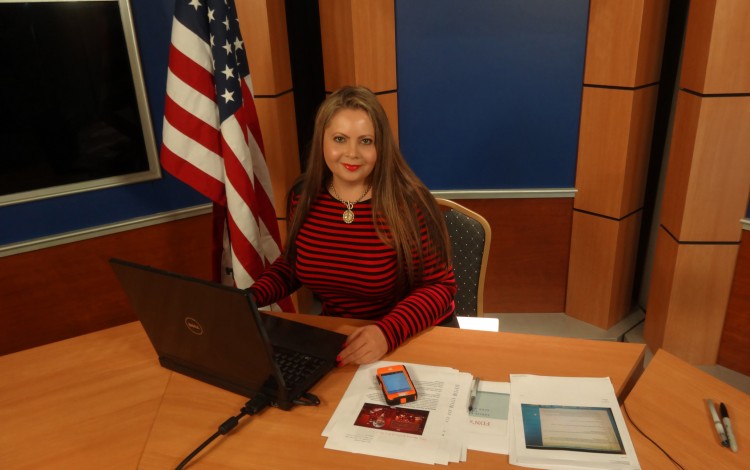 About the interviewee: Julia Davis is a Ukrainian-American investigative journalist and the author of the ‘Russia’s Top Lies About Ukraine’ series
Business Ukraine magazine

The conflict in Ukraine has taught the world that modern wars are increasingly wars of the mind. Russia’s weaponization of information has proved devastatingly effective, demonstrating the prominence of information strategy in twenty-first century conflict. Indeed, many observers regard the Russian information offensive as the single most important and effective element of the Kremlin’s hybrid war against Ukraine.

Russia’s infowar tactics enjoyed considerable initial success but have since become vulnerable to the law of diminishing returns, as international audiences grow increasingly skeptical of Kremlin claims and learn to regard any information coming from Russian sources with suspicion. Bands of online debunkers have encouraged this process by constantly exposing Russian disinformation and fakery.

One of the first personalities to draw international attention to Russia’s infowar deceits was Kyiv-born American investigative journalist Julia Davis, who began producing the ‘Russia’s Top Lies About Ukraine’ series in the wake of the Euromaidan Revolution. She told Business Ukraine magazine how she became involved in resistance to the Russian information war, and explained why she thinks the Western mainstream media should be doing much more to expose Kremlin disinformation.

You were among the first people in the English-language media to begin exposing Russian fakes about Ukraine. At what point did you decide to begin publicly countering the disinformation efforts of the Kremlin?

I was greatly impressed and inspired by the events of Euromaidan in Ukraine. At the same time, I was shocked by the unbridled falsity of reports being concocted by the Kremlin-controlled media. These claims were clearly resonating in the West. American media is very U.S.-centric and international events are underreported. This created opportunities for Kremlin-controlled outlets. For example, English-speaking RT (formerly Russia Today), which previously postured as an outlet exposing Western corruption, suddenly became a bullhorn for anti-Ukrainian propaganda. There was no concentrated effort in the Western media to counter these falsehoods. I am a Ukrainian–American and I decided that I could not stay quiet about such injustice. When Russian Foreign Minister Sergei Lavrov recently called the Ukrainian diaspora in the West ‘rabid’, he meant to insult us. Instead, it was effectively a backhanded compliment about our common passion for Ukraine. When the land of our fathers is under attack, we feel compelled to fight back. I took it upon myself to expose blatant fakery and intentional misrepresentations by the Russian press and their Western pawns. I started to select the most important and interesting pieces of disinformation, compiling them into my series: ‘Russia’s Top Lies About Ukraine.’ This collection continues to grow.

The most damaging fakes affecting Ukraine’s international image are the ones that represent most Ukrainians as Nazis, those that accuse the Ukrainian government of deliberately slaughtering civilians in Donbas, and the multitude of fakes related to the downing of MH17. The fakes that backfired most damagingly on the Kremlin are their ridiculous fabrications of the crucified 3-year-old boy in Slovyansk, a similar made-up report of a 10-year old Donetsk girl killed by Ukrainian artillery (debunked by the BBC), and Putin’s ever-changing story about the role of the Russian army in the annexation of Crimea. More recently, Turkey and Germany have become targets of Russian propaganda involving the same pattern of fake news and deliberate disinformation. As a result, other countries have finally discovered the scale of the deceptions used by Russia against Ukraine for so long. This has created an environment where nobody knows whether information coming from Russian sources is credible.

Despite widespread recognition of the Kremlin’s ‘weaponization of information’ and the Putin regime’s tight editorial control over the mainstream Russian media, many international correspondents continue to seek balance by quoting Russian media sources. How can reporters maintain objectivity when covering Russian-related stories while at the same time avoiding becoming unwitting accomplices in the Kremlin infowar?

This is a very serious issue, since Western reporting standards require presenting two sides of the story in an objective manner. However, reporters have an obligation to report the facts, not insinuations or baseless allegations. No correspondent should ever rely solely on Russian media reports. There has to be independent confirmation by a trusted source. It is also important to call things by their true names. In my humble opinion, political correctness has no place in accurate reporting. Crimea is not Russian - it is under Russian occupation. Russian soldiers in Ukraine are not ‘volunteers’. If your main focus is not offending anyone with your reporting, you’re doing it wrong.

You have been actively debunking Kremlin fakes for almost two years now. How has international awareness of Russian disinformation techniques evolved over this period?

International awareness of the Russian information war continues to evolve in leaps and bounds, with a growing number of important initiatives to help counter Kremlin disinformation. The creation of the EU’s East StratCom Task Force to counteract Russian fakes is a very important step. The tireless efforts of the Ukrainian StopFake project continue to impress me. The Bellingcat open source investigative group, founded by Eliot Higgins, is amazingly effective. Russian-language online resource Noodle Remover, created by Alexey Kovalev, is also a great initiative. The combined efforts of different debunkers from around the world all play a role in developing understanding of what the Russian media had become after Putin’s covert invasion of Ukraine.

You have personally exposed hundreds of specific Russian media lies about Ukraine. Thousands more have been broadcast and printed over the past two years. Nevertheless, Russia’s infowar continues virtually uninterrupted, producing fresh fakes on a seemingly daily basis. Why hasn’t such widespread exposure of Russia’s disinformation strategies led to a complete collapse in the Kremlin’s credibility?

The Kremlin’s credibility has definitely suffered, but more efforts are necessary. I believe that the Western mainstream media should start devoting time and attention to Russia’s disinformation campaign. Bigger audiences can be reached through global TV coverage and various video programs. Nevertheless, no matter what we do, the Kremlin press will continue to spread disinformation. It is our responsibility to provide an alternative to their brainwashing. Social media and other Internet-based exposure bear fruit but they are not enough on their own.

Russia has proved extremely skillful at appealing to the margins of Western society and at targeting Western audiences receptive to conspiracy theories. What role has a loss of faith in the international mainstream media played in creating fertile ground for Russian disinformation among Western audiences?

The Western mainstream media is directly at fault for creating this kind of vacuum. When corruption is underreported and legitimate whistleblowers are shunned by the mainstream media, the only opportunity for those stories to be told is via the likes of RT. Of course, Russia fully exploits this to their advantage. Valid stories get mixed in with outlandish conspiracy theories, together with a large helping of anti-Western propaganda. This creates a dangerous cocktail where truth telling serves as the cover for blatant disinformation.

Ukraine’s low international profile made it an unknown quantity that was particularly vulnerable to information attack. Should the priority for Ukraine now be debunking Russian lies or establishing a more positive international image?

Debunking Russian lies about Ukraine is important, but it should be done without being sucked into time-consuming debate over silly fakes. At this point, debunking is about quality, not quantity. The main focus should be on building up Ukraine’s international image. Too many people in the world still mistakenly believe that ‘Ukraine used to be part of Russia’ or ‘Ukrainians and Russians are the same people.’ Ukraine has to re-introduce itself to the world. Feature films such as the wonderful Oscar-nominated documentary ‘Winter on Fire: Ukraine’s Fight for Freedom’, and even fashion coverage of Ukrainian designers in Vogue magazine, help to tell the world about Ukraine and Ukrainians. These efforts have to continue.

Many journalists who have exposed Russian fakes have themselves become targets of the Kremlin’s information war. Have you been targeted over your articles?

As soon as my articles began to appear I became a target for Kremlin trolls, RT correspondents and Western useful idiots. I regard troll attacks as par for the course. To me, they only mean that I am on the right track. The ‘block’ button is one of my best friends on social media. As they say, ‘Don’t feed the trolls’. I give no time to negativity and do not allow trolls to sidetrack my efforts.

As someone who grew up in the Soviet Union, how does today’s Russian disinformation compare with the propaganda of the Soviet era?

Propaganda in the Soviet era was infinitely less sophisticated than the Kremlin’s current tactics. In the Soviet Union, we only had a few TV channels and an exclusively Soviet press. The stories were always pretty much the same: the West was at fault for everything that is wrong in the world and the Central Committee of the Communist Party always ‘knew best.’ In spite of the difference in tactics and media outlets, the main idea of the Kremlin media today remains the same: patriotic citizens are expected to go along with the official line. Many Russians realize that their media is lying to them and to the world, just as many Soviets realized they were being lied to. However, they believe that all is fair in the information war between Mother Russia and the West. In that sense, the principles remain unchanged.

It used to be said that the Soviet propaganda experience had made Russian audiences extremely cynical and skeptical, and yet they are now often portrayed as a gullible herd ready to swallow whatever they are told by the Kremlin. How do you explain this apparent contradiction?

The way the news is served up by the Russian media, often spiced up with phony interviews and fake photos, may appear believable to indiscriminating audiences. Those who grew up in the Soviet Union, like myself, became quite skeptical about the veracity of media reporting. At the same time, Russians of that generation are equally as skeptical about the Western media. Therefore, in their minds, “everyone is lying, so what does it matter?” Debunking fakes may not be effective with audiences who believe that this is simply an information war where anything goes.