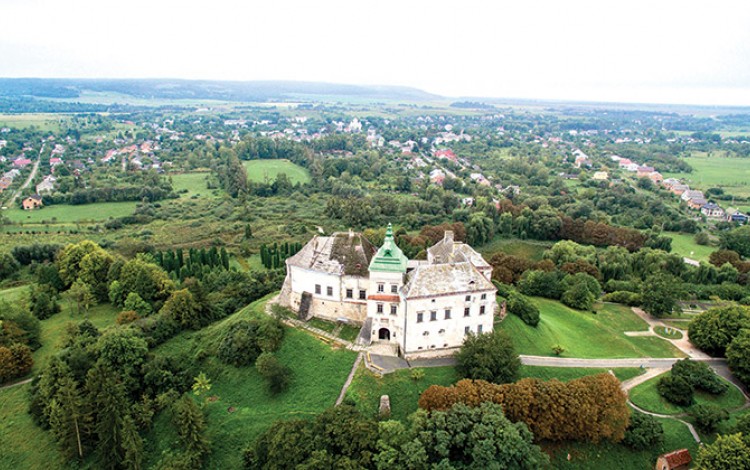 An ambitious new cultural heritage preservation project is attempting to create an aerial archive of the stunning architectural legacy left behind by the era of the Polish-Lithuanian Commonwealth in Ukraine. Using drone video technologies, the project is attempting to document the many castles, fortress and churches that make up the shared historical inheritance of today’s Poland and Ukraine.

This joint Polish-Ukrainian initiative aims to provide a new generation with access to information about a long chapter of Central European history often eclipsed by the tumultuous events that were to follow in subsequent centuries. The Polish presence in Ukraine dates back many hundreds of years, creating an enormous list of landmarks and monumental structures that qualify as the common heritage of both countries. Ever since the collapse of the Soviet Union in 1991, interest in the Polish-Lithuanian Commonwealth has been growing, both within the former borders of the once-mighty state and beyond. Ukraine is central to this process and has a vast array of sites that reflect the important role it played in the history of the Commonwealth.

The new drone documentary initiative, dubbed “Poland-Ukraine. In the Wake of Historical Heritage”, aims to create a video library of 100 short films that will serve as a window onto Commonwealth heritage located in Ukraine. The Europe-East Integration Association is implementing the project in cooperation with the Polish Institute in Kyiv and the Ukrainian Communication Group. Meanwhile, Poland’s Ministry of Foreign Affairs is providing financial support.

The project has a necessarily broad geographical scope. It will encompass all of the most famous places from the annals of Polish-Ukrainian history such as the fairytale fortress city of Kamianets-Podilskiy, Zbarazh Castle in western Ukraine’s Ternopil Oblast, and Khotyn Fortress in southern Ukraine’s Chernivtsi Oblast near to the modern-day border with Romania. Then there is Olesko Castle close to Lviv, which entered history as the birthplace of Poland’s future King John III Sobieski, a man celebrated in his lifetime as the savior of Europe following his victory over the Ottoman Empire at the 1683 Battle of Vienna. Less well-known landmarks will also feature in the project, including the chateau-like castle at Pidhirtsi in Lviv Oblast, which dates back to the 1630s and was once one of the jewels in the Polish Crown of the Commonwealth.

All of these landmarks speak of the sheer scale of the multinational Commonwealth. The project’s organizers hope that by documenting this heritage from the air in a visually striking manner, they will be able to raise public awareness and generate renewed interest in a period that remains vitally important to the national stories of both Poland and Ukraine.

A secondary objective is to publicize the tragic condition of many of these landmarks. After decades of neglect, much of Ukraine’s Polish-Lithuanian Commonwealth legacy has fallen into a state of advanced disrepair. It is now in danger of being lost forever unless there are fresh efforts to preserve these heritage sites. Since Ukraine gained independence, a large number of objects have been saved and renovated thanks to support from the Polish Ministry of Culture and National Heritage and, starting in 2018, additional financial support from the newly created POLONIKA National Institute of Polish Cultural Heritage Abroad. Nevertheless, the needs in this area remain extensive and urgent.

The joint Ukrainian-Polish team working on the drone documentary series includes historians, journalists, non-governmental heritage organizations and teams of local activists. The films they are producing will be available in three languages (Ukrainian, Polish and English) and will feature commentaries from a joint Ukrainian-Polish team of historians. Each individual video will appear at the project’s website. An official YouTube page will also offer the full archive of drone documentaries, while enthusiasts can keep track of progress via the project’s official Facebook page.

About the author: Bartosz Musialowicz is the initiator of the “Poland-Ukraine. In the Wake of Historical Heritage” project and Director of the Polish Institute in Kyiv