SWEDEN IN UKRAINE SPECIAL FOCUS: Up to 30,000 fans of the Swedish national team made Ukrainian capital home during 2012 European Championship 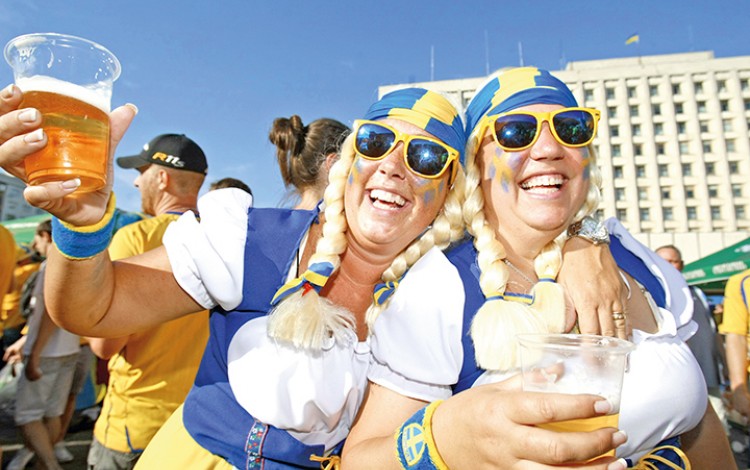 When Ukraine co-hosted UEFA’s Euro 2012 championship, the luck of the draw meant that Sweden were scheduled to play all three group stage games in Kyiv. Rather than travelling from city to city like most fans, this meant that followers of the Swedish national team could settle down and enjoy an extended break in the Kyiv sunshine. What followed was a two-week love affair between the residents of the Ukrainian capital and an army of good-natured Swedish fans that eventually swelled to over 30,000 in number.

Sweden failed to sparkle on the pitch and did not progress into the knockout stages of the competition, but the team’s yellow-and-blue clad fans were the undisputed stars of the championship, winning friends with their jovial antics and general willingness to engage with the Ukrainian public. Business Ukraine magazine tracked down some of the Swedes who helped organize this memorable Kyiv residency and asked them to share their recollections.

Gothenberg restaurant manager Lindha Jansson was one of the organisers of the vast ‘Camp Sweden’ settlement erected on Kyiv’s Truhaniv Island to house thousands of visiting Swedish fans during Euro 2012. At its height, the camp was home to over 7,500 Swedish supporters, making it one of the focal points of festivities during the early stages of the tournament. As well as providing accommodation, the camp also offered a daily programme of entertainment including live music performances and sports events, all washed down with lashings of cold beer.

Ms. Jansson recalls that on the eve of the big kick-off there were fears that the camp would not be able to cope with the huge influx of Swedes, but says that everything eventually went according to plan. “Three days before the fans were due to start arriving, nothing was ready in terms of water, electricity or other basic amenities. We were concerned at the time that the Ukrainian authorities didn’t seem to appreciate quite how many fans would be coming. But in the end it was a great camp and our biggest ever,” she reflects.

Ms. Jansson is still full of praise for her Ukrainian Euro 2012 hosts, commenting that she and her fellow Swedish camp organisers encountered levels of everyday helpfulness and kindness that are by no means the norm when it comes to interactions between locals and travelling football fans. Unsurprisingly, she singles out Truhanov Island itself as her favourite spot in the Ukrainian capital, calling it “a wonderful green area and a fantastic place to build a camp.”

The Swedes did not only take over Kyiv’s main mid-river island – they also dominated the Euro 2012 fanzone itself on Khreschatyk, which boasted its very own Swedish bar area. This Swedish enclave quickly became the first port of call for visiting fans of all nationalities. Euro 2012 was generally one of the friendliest football championships in living memory, and this spirit of camaraderie was nowhere more pronounced than in the Swedish section of the fanzone. Every day English, French, Dutch and German fans rubbed shoulders with the Swedish contingent and their Ukrainian hosts. Amazingly, there was almost no friction whatsoever, despite industrial-scale alcohol consumption.

The four Backstrom brothers (Jonas, Markus, Staffan and Lars) made Euro 2012 a family affair, travelling to Ukraine together for a ten-day adventure. Hailing from the provincial Swedish town of Falun, they came to Kyiv with few expectations but say that they still have very fond memories of their Ukrainian summer holiday. “Unfortunately we didn’t have much luck on the pitch at the Olympic Stadium, but we took some unforgettable memories back to Scandinavia with us. The beautiful women of Kyiv, the kindness of locals, the city’s beaches and its cultural sites all helped take our minds off the team’s defeats,” they told Business Ukraine magazine via email.

Euro 2012 was supposed to put Ukraine on the map and create a positive image for the country among international audiences. Unfortunately, this positive legacy has been completely overshadowed by the past eighteen months of revolution and war, making the tournament seem like a distant memory for Ukrainians and international observers alike. Nevertheless, for thousands of Swedes it remains a fond memory and an unforgettable experience. The Swedish invasion of 2012 made such an impression on Kyiv that the Ukrainian capital now boasts a monument in honour of the visiting Swedish fans. Meanwhile, in Sweden today, thousands of those who made the trip continue to serve as unofficial ambassadors for Ukraine. Each one is able to confirm that there is a lot more to the country than the current headlines about conflict and political upheavals might suggest.