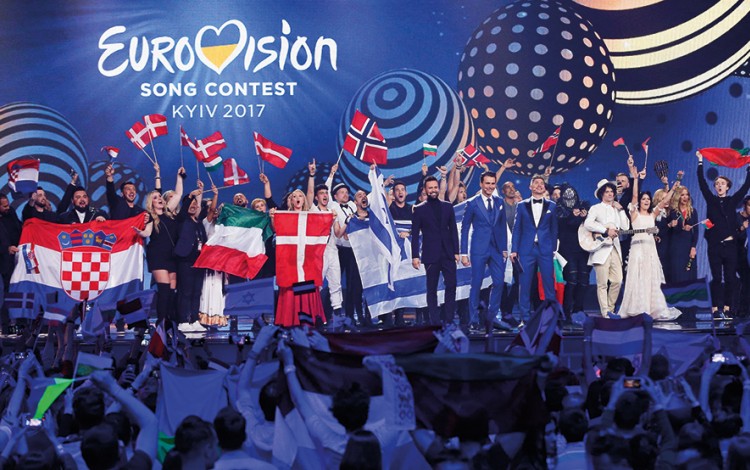 The 2017 Eurovision Song Contest in Ukraine was widely hailed as one of the best in living memory. Many guests expressed surprise as the quality of the organization and the ample charms of host city Kyiv
Business Ukraine magazine

May 2017 looks set to go down in history as a landmark month in Ukraine’s epic journey from post-Soviet wilderness to European integration. In the space of a few historic weeks, Ukrainians celebrated confirmation of visa-free EU access while also hosting one of the most spectacular and acclaimed Eurovision Song Contests in living memory. As festivities gripped the Ukrainian capital, it was easy to imagine we were witnessing a major breakthrough.

While Kyiv partied, the international press offered up article after article in praise of the city. Did the flurry of positive PR generated by Eurovision succeed in changing outside perceptions of Ukraine? In reality, addressing Ukraine’s international image problems is a Herculean task that will require many years of hard work. However, a major opinion poll conducted among foreign Eurovision visitors suggests Kyiv’s efforts to stage a memorable song contest were not in vain.

Victory at the 2017 Eurovision Song Contest deservedly went to Portugal’s Salvador Sobral for his hauntingly beautiful ballad, “Amar Pelos Dois”. However, once the music stopped and the dust settled, there was widespread recognition that the real winner of Eurovision 2017 was Ukraine itself. Ukrainians managed to introduce their country to thousands of international guests and hundreds of millions of TV viewers across the globe, creating an array of positive impressions that directly challenged prevailing negative stereotypes of war-torn and poverty-stricken Ukraine.

There were inevitably hiccups along the way. The contest’s “Celebrating Diversity” slogan seemed somewhat at odds with the choice of three white male TV hosts, while the failure to complete the Arch of Diversity in downtown Kyiv following thuggish far-right objections also led many to portray the unfinished arch as a metaphor for Ukraine’s incomplete embrace of European values. Nevertheless, Ukraine’s overall handling of the country’s Eurovision 2017 host duties was engaging and impressive in equal measure.

There is considerable evidence that these efforts have paid off handsomely. Ever since the start of May, the international media has seen a steady flow of positive tourism articles hailing Kyiv as an undiscovered gem. UK journalist Heidi Stephens captured this general enthusiasm for the Ukrainian capital city in her popular Eurovision live blog for The Guardian newspaper. The British reporter commented: “If you’ve never been to Kiev, you really should. It’s a beautiful and friendly city, the food is magnificent and everything is ridiculously cheap. I’ve had a ball here for the last few days, the organisation has been brilliant. Going to Eurovision is an experience in itself, but doing it in a city I’ve never been to before makes it really special - I highly recommend.”

In order to gauge what Eurovision visitors thought of their time in Ukraine, Kyiv’s Institute of World Policy commissioned pollster company GfK Ukraine to conduct a survey among more than 1,000 Eurovision guests. The findings of this poll suggest that Ukraine’s capital city is more than capable of pleasantly surprising tourists, while also highlighting the image problems created by the ongoing hybrid war with Russia and the negative media coverage of the country’s stuttering efforts to overcome chronic corruption.

Of the 1060 survey participants, 28% admitted to having security concerns about visiting Ukraine. Meanwhile, 24% said that prior to their arrival in Kyiv they had primarily associated the country with war. The experience of actually spending time in the Ukrainian capital clearly altered these perceptions. After a few days in Kyiv, respondents no longer cited armed conflict among their impressions of Ukraine, with the most popular association (34%) being Ukraine’s friendly and positive population.

Ukraine’s poor international image has traditionally created low expectations among visitors to the country, and this trend was very much evident among Eurovision guests. Just over 47% of survey respondents said Kyiv had surpassed their expectations, while a massive 92% voiced their readiness to return to Ukraine. Just 10 visitors, or less than one percent of those surveyed, expressed disappointment at their experiences in Kyiv. When asked to identity the things that had impressed them the most, the top responses were the Ukrainian people (73%) and Ukrainian culture (45%). The biggest negatives were poor public transport infrastructure (26%) and a perceived lack of English-language skills (18%).  As Ukraine seeks to engage with the international community, these results are worth dwelling on. Expensive media PR campaigns can certainly help to boost Ukraine’s international profile, but enticing people to visit Ukraine may actually be one of the most cost effective ways of improving outside perceptions of the country.

The Eurovision Song Contest was widely seen as an opportunity for Ukraine to underline the country’s European credentials, and survey results indicate that the event lived up to its billing. International opinion polls of European Union citizens generally identity little if any enthusiasm for future Ukrainian EU membership, but Eurovision visitors were positively bullish on the subject. A massive 54% of respondents saw Ukraine joining the EU within five years, while 19% opted for the slightly more realistic timeframe of a decade. Just 1% said they did not see any EU future for Ukraine, making this the most Euro-optimistic survey in Ukrainian history. While these results doubtless owed much to the intoxicatingly festive mood generated by Eurovision, they do serve as a reminder that visitors to Kyiv are generally surprised and impressed by how quintessentially European the city is. Indeed, 57% of respondents explained their belief in Ukraine’s future EU membership by pointing to the country’s European credentials, while 64% said their time in Kyiv had made them more enthusiastic about Ukraine’s EU membership ambitions.

The survey also revealed the continuing cost of negative international media coverage on perceptions of Ukraine. When asked to cite the key obstacles to Ukraine’s EU integration, the most popular answer was corruption (45%). Far fewer respondents (37%) identified the ongoing war with Russia, while more than a quarter (27%) pointed to Ukraine’s oligarchs as a major barrier to closer ties with the European Union. It is highly unlikely that Eurovision visitors encountered any first-hand evidence of government corruption and nefarious oligarch influence during their short period in the country. Instead, their responses serve as a reminder of the influence exerted by endless coverage of Ukraine’s corrupt elite. This is the harsh reality facing all those working to improve Ukraine’s international standing. Kyiv managed to dazzle and delight its Eurovision visitors, but until the country’s political classes stop attracting damaging headlines, Ukraine will continue to fall short in its bid to create a positive image and establish itself as an exciting new addition to the European ensemble.