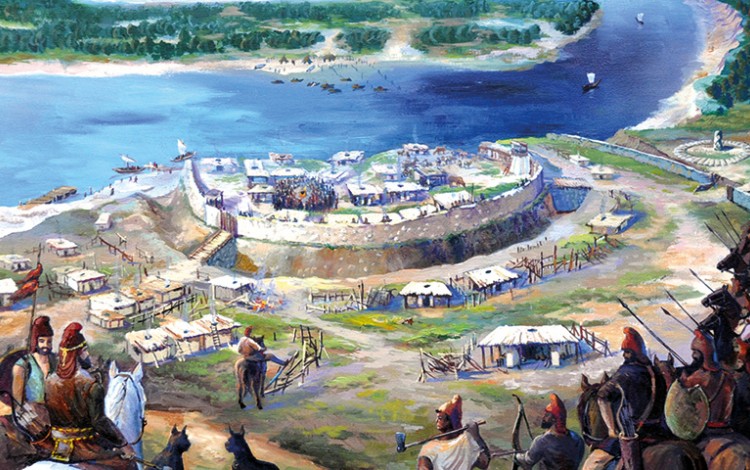 According to the history books, Mykolaiv was founded in 1789 as part of Russian Empress Catherine the Great’s march through Ukraine towards the northern shores of the Black Sea. This late eighteenth century foundation date remains central to the mythology of the city, placing it firmly within the imperial Russian narrative as the last of the settler cities established in southern Ukraine by Catherine’s favorite, Prince Grigory Potemkin.

Relics of this imperial inheritance still abound throughout today’s Mykolaiv. Giant busts of Tsarist admirals and dilapidated nineteenth century admiralty buildings remind visitors of the city’s illustrious past as the headquarters of the Imperial Russian Navy. Vintage cannons stand guard over the estuary, offering echoes of Mykolaiv’s role as a key staging post for Russian forces during the mid-nineteenth century Crimean War. Even the orderly downtown layout of neatly intersecting boulevards is suggestive of a centrally planned colonial undertaking.

There is much truth to this vision of Mykolaiv as a product of the Tsarist Empire’s southwards expansion. However, the history of the city does not actually begin with the arrival of the Russian fleet. There is archeological evidence that Mykolaiv’s earliest urban community appeared three thousand years before Russian troops first set foot in the area. These archeological finds have excited and confounded the international academic community in equal measure. The implications of the discoveries in Mykolaiv could reverberate throughout Eastern Europe, altering our understanding of the civilizations that once populated the Black Sea region and the northern extremities of the ancient world.

The site of Mykolaiv’s archeological treasure trove is underwhelming to say the least. Known locally as “Diki Sad” (“Wild Garden”), at first glance it appears as little more than an abandoned and overgrown construction site. Diki Sad is perched high above the point where the Inhul and Southern Bug rivers meet in what is the geographical heart of the city. It is an obvious location for an ancient settlement, offering great riverside infrastructure and steep defenses. These natural advantages are no longer quite as persuasive as they once were. Today, there is little to suggest that it is a site of major national importance. A half-collapsed wooden fence does a poor job of protecting the area from either intruders or the elements. The current population of the ancient city seems to consist exclusively of junkies and vodka-swilling vagabonds ready to snarl and stare at anyone foolish enough to disturb their intoxicated idyll. The only evidence of the site’s potential significance are the numerous archeological pits dotted around the three-hectare plot. This is the Ukrainian Troy – an underfunded archeological breakthrough with a history mirroring Ukraine’s own post-independence struggle to make itself heard on the international stage.

Archeological attention first focused on Diki Sad in the late 1920s when Soviet academics uncovered evidence of an ancient settlement. Prior to this discovery, the site has been a garden used by the city’s swaggering naval officers. The Soviets showed no great inclination to expand on their initial discoveries, and the serious business of excavations only really began with the dawn of Ukrainian independence in 1991. What they uncovered has challenged existing theories about the development of civilization in the Black Sea-Danube region. The city that once stood at Diki Sad dates from the twelfth century BC – roughly the same period as ancient Troy. It is believed to have been the work of Cimmerians – a tribal people most famously associated with the fictional character Conan the Barbarian.

Unlike other regional archeological discoveries from this period, the Diki Sad site boasts all the indications of a significant urban dwelling. There is evidence of intricate defensive structures, stone bridges, watchtowers, storage facilities, and sophisticated residential buildings. While small by today’s standards, the defended inner core of the site was probably home to around 700 people, making it a relatively large city of the time. This flatly contradicts accepted archeological wisdom for the period, which has long held that the tribal peoples who populated the southern Ukrainian steppe lands were nomadic. This nomadic thesis has served to create the image of southern Ukraine as the borderland between so-called civilized and steppe cultures. Diki Sad suggests a highly developed urban community that flies in the face of this previously neat civilizational divide. Evidence has been uncovered of trade with Asia Minor and the Baltics, suggesting the city could have operated as a sophisticated commercial hub over a thousand years before the Kyiv Rus civilization rose to prominence thanks to exploitation of the same Baltic-Black Sea trade routes.

“Fifteen years ago, people used to laugh at us when we talked about Diki Sad at international conferences. But now there is growing academic interest,” offers Oleksandr Smirnov, the deputy head of the Diki Sad excavation team at Mykolaiv National University’s History and Archeology Department. The infectiously enthusiastic Mr. Smirnov is one of the reasons why the secrets of Diki Sad are now being slowly but surely uncovered. He was an university student in the early 1990s when exploration of the site began, and has remained intricately involved in the project ever since. He now leads his own students on weekend digs that provide the undergraduates with valuable experience while helping to move the cash-strapped excavation works forward. It is a slow and painstaking process marked by occasional breakthroughs such as the discovery of ritual utensils or a new gateway into the inner core of the city.

In common with virtually every other representative of the Ukrainian academic community, Mr. Smirnov complains about a chronic lack of financial resources. His immediate goals are modest enough – he says he dreams of securing sufficient investment to pay for proper perimeter fencing and guards to protect the site. In the medium term, he hopes to find international donors willing to back the further development of Diki Sad. Ultimately, the objective is to transform the area into an open-air partial reconstruction of the ancient city that would highlight Mykolaiv’s three thousand years of history and its role as a pioneering outpost in the spread of urban culture throughout the region. “The findings at this site demonstrate that the ancient Ukrainian steppe was not only home to nomadic tribes,” offers Mr. Smirnov.

He believes the revelations of Diki Sad are of more than academic interest. As well as challenging archeological orthodoxy with regard to the divide between nomadic to urban cultures, the site also exposes the historical illiteracy of Russian imperial posturing. According to Mr. Smirnov, the establishment of Tsarist Mykolaiv in 1789 was merely the continuation of a cosmopolitan regional narrative stretching back millennia. “The idea that this was virgin land settled by the Russians is a complete myth. This part of Ukraine was never empty. Urban life began with the Cimmerians and has continued ever since,” he explains. “As well as the Ukrainians themselves, the region has served as home to Greeks, Byzantines, Genoese, Crimean Tatars, and Ottomans. There have always been communities living here.”