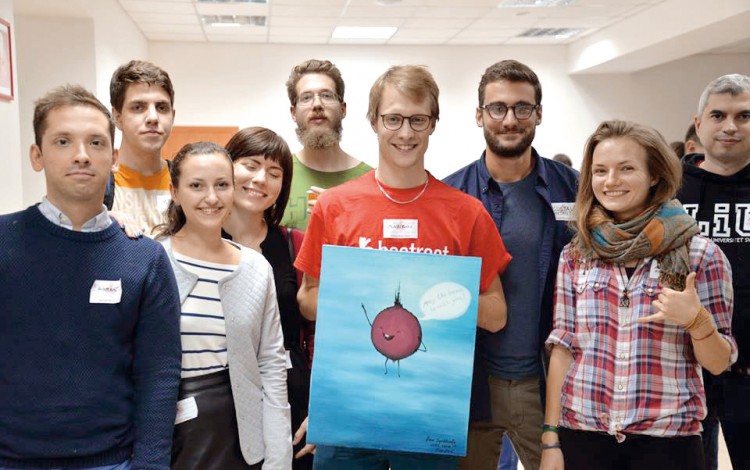 The city of Poltava has a special place in Swedish-Ukrainian relations, being the site where Swedish forces were defeated by Russian Tsar Peter the Great in the famous early eighteenth century Battle of Poltava. More than 300 years after the battle, Poltava is a rather ordinary Ukrainian city of 300,000 people which has little interaction with the global economy. However, a modern conflict in regions neighboring Poltava is bringing Swedes back to the area, this time as saviors rather than would-be conquerors.

Poltava has in recent months taken in thousands of of Internally Displaced People (IDPs) from the east of Ukraine, fleeing fighting between Russian-backed militants and Ukrainian forces. Ukraine officially has 1.4 million IDPs (approximately 3% of the total population) but difficulties registering with the authorities mean the real figure is likely to be much higher.

These refugees have arrived in all corners of Ukraine, bringing both personal needs and the normal human desire to work and build new lives. With Ukraine undergoing a severe economic crisis (the economy of what was already one of Eastern Europe’s poorest countries shrank by approximately 11.5% last year according to European Bank for Reconstruction and Development estimates) good jobs for new arrivals are hard to come by.

The challenge to help IDPs find work has been taken on by Swedish entrepreneurs Andreas Flodstrom and Gustav Henman. They first came to Ukraine in 2012 with, in their own words, “only business cards and a Lada”. They initially lived on air mattresses in the capital city Kyiv for five months while setting up an IT outsourcing company called Beetroot, the main ingredient of Ukraine’s famous borsch soup.

Ukraine: land of IT opportunity

Tech is big business in Ukraine, with the country’s universities turning out 16,000 IT professionals each year and a total stock of 90,000 certified IT professionals according to the Ukrainian Ministry of Economy. Outsourcing companies make good profits linking Ukrainian programmers with international companies needing IT expertise. Beetroot was enjoying growth, with 15 regular clients on the books, approximately half from Sweden initially picked up through leveraging personal networks back home. But Ukraine’s 2013-14 Euromaidan Revolution switched the young Swedes’ priorities.

The revolution and subsequent Russian annexation of Crimea and hybrid invasion of eastern Ukraine did not have to mean change for Beetroot and its 60 employees. Many IT companies carefully tailor their business processes to the point that international clients may not even know they are dealing with programmers based in Ukraine. However, Andreas and Gustav decided that they could not turn a blind eye to the changes happening in their adopted country and set to work figuring out how they could help Ukrainians affected by the war to find new work.

The initial challenge was that IT outsourcing in Ukraine is centered on large cities with approximately one million citizens or more. Having taken a Masters in Engineering in Moscow with no prior knowledge of the Russian language, the two young Swedes are not shy of a challenge and chose Poltava as the city best positioned to help refugees despite having very few internationally-focused IT companies. Initial help for the project came from the Swedish International Development Corporation with a planning grant, which the two entrepreneurs spent not on planning but on running an initial four-month course for 12 young Ukrainians.

In 15 months, three sets of 12 students have taken the four-month course at the Beetroot Academy, with only one person dropping out. A sizable 40% of students registered are female, which is quite an impressive statistic for the relatively male-dominated world of IT. Free English classes are also included. The Beetroot Academy specializes in front-end development, relatively simple programming in high global demand. The program recently attracted a new round of funding from a United Nations Development Program (UNDP) tender financed by the government of Japan. Thirty students are currently enrolled after 420 applications were received for the most recent intake. The academy has also expanded to the Ukraine’s main Black Sea port Odesa.

The Academy’s positive effect in its graduates’ lives thus far have been quite impressive. A four-month course is obviously not the same as a four-year degree but nevertheless 70% of the Academy’s graduates have gone on to find work in the IT sphere. Half of graduates are employed directly by Andreas and Gustav, while others have gone on to work for some of their competitors. Crucially, all 36 students of the first three academy courses have stayed in the city of Poltava, bringing skills and innovation to the jaded local economy. Salaries for front end developers, even with limited experience, are more than three times the average salary in Poltava, a solid living considering the average wage in the local economy is currently as low as USD 100 per month. One student of the academy, Oleksandr, before beginning his IT career had been driving a taxi in Poltava, work which makes literally only a few dollars of profit each day.

The two Swedes hope to roll out similar academies throughout the post-Soviet world, where mathematical literacy is high but connectedness to modern business trends lacks. Their ambition is to teach ‘thousands’ of students each year and in Andreas’s words: “save the world one line of code at a time”.

About the author: Conal Campbell is an Irish writer living in Kyiv