In his first Independence Day address, President Zelenskyy reflects on Ukraine's epic state-building journey and calls on fellow Ukrainians "not to quarrel over the past, but to unite for the future" 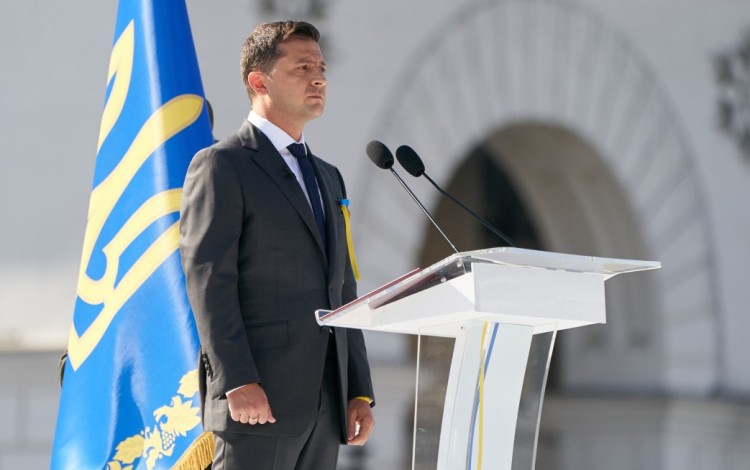 The following text is the official English-language translation of President Zelenskyy's 24 August address to the nation to mark Ukrainian Independence Day 2019:

My every morning begins with an SMS.

An SMS from the General Staff. Over the past 24 hours there were 7 occasions of shelling and two casualties. Figures may vary, but only one figure makes the morning good. Zero.

And let us first of all express gratitude to those thanks to whom we can be here today, under the bright sun and clear blue skies.

So that our defenders, who are now defending Ukraine in the east, can hear the applause.

Thanks to you, we are celebrating the 28th anniversary of Independence Day today.

Although it is not quite correct to say that Ukraine is 28. After all, we have done a lot by the 91st year. Baptism of Kyivan Rus’ took place, Ivan Fedorov published the Apostle in Lviv, the Kyiv-Mohyla Academy was founded, the Cossacks led by Bohdan Khmelnytsky and Ivan Sirko conquered the Dunkirk fortress, the Constitution of Pylyp Orlyk was born. Ukraine was one of the founders of the UN, and Serhiy Koroliov made a significant contribution to the conquest of space by humanity. These are just a few of the highlights of the vibrant history of our centuries-old and at the same time young country.

And today we celebrate, perhaps, the most important day in the life of the state. The day it gained independence.

Today, an entire generation, born in independent Ukraine, has already formed. For them, this is a normal state of affairs. It can't be different for them. And that's wonderful. Because this generation is our mental foothold. Foothold for freedom, democracy and development. They think differently, they think in a modern way, which means that Ukraine will only move forward.

However, we should not forget that Independence did not appear by magic. The active struggle for it began over 100 years ago. It lasted in times of the Soviet Union. Mykola Rudenko, Vasyl Stus, Petro Hryhorenko, Viacheslav Chornovil, Levko Lukyanenko, participants of the Revolution on Granite. This is an incomplete list of those who fought for Independence. Someone at the cost of one's freedom, and someone at the cost of one's life. For the sake of this one day. August 24, 1991. And this day was inevitable. Because, as Levko Lukyanenko said, the desire for independence is embedded in our genetic code.

28 years have passed. 28 different years. Difficult, stormy, thorny, yet our common. And we have lived through all these years together. The whole country.

The whole country has jumped to a record height - 6 meters 14 centimeters.

The whole country has forced the European football giants to tremble. When Luzhny from Lviv received a ball from Holovko from Kherson, passed the ball to Rebrov from Horlivka who then passed it to Shevchenko from Kyiv… “Goal” was then cried out from Uzhhorod to Luhansk.

The whole country, from Donetsk to Carpathians, has been flying to the stars together with Leonid Kadeniuk and was happy to hear our anthem in outer space for the first time.

The whole country conquered Europe with “Dyki tantsi” and defended the democratic choice in 2004. The whole country prayed for the sailors of “Faina” captured by Somali pirates and shed tears over miners in the Zasiadko mine.

The whole country rejoiced when a wreath fell on someone.

The whole country tried to prepare for EURO 2012 in time and couldn’t understand how one couldn’t see the goal against England.

Those were different years. Not easy, but now, looking back, we can say that they were pretty carefree. As the year 2014 came then.

Initially, throughout the country, we have proven that we have dignity. We were not afraid of water cannons and batons. And someone was not afraid even of sniper bullets.

Then, the whole country learned that a hundred could be heavenly.

And then the war came to our land. And the whole country faced it.

And here “the whole country” is not just an artistic technique. In the truest sense of the word, the whole country has been giving money for bulletproof vests, medicines, thermal imagers.

The whole country, online and near TV screens, has been closely monitoring the news from the east. The news where the other words were meaningless. The only things that mattered were the names of the inhabited localities and the number of fallen heroes.

Paradoxically, we were born again at that time. As a country and as a society. We united. We regained that forgotten feeling when you are proud of your Homeland. That is why Ukraine's pride has gathered here today! First of all, these are our warriors. Those who defended, and those who are now defending our land. These are the families of the military. Those who have lost a son, father, husband or brother. These are volunteers. Those who help and sometimes give the last things they have. There are also those who teach and those who save lives daily. Those who glorify Ukraine in the sports arenas of the world. Our scientific and creative potential. And of course - our future - our children. These people are not just participants in the March of Dignity. These are our thousands of reasons to love Ukraine.

You know, I was asked once why do I love Ukraine. Strange question. Why do you love your mom? She gave birth to you, raised you. I love Ukraine because I was born here, I love our flag and I rejoice when it is hoisted triumphally. I love our anthem because it is our greatest hit! What other song does each of us know and sing in such a way?

I love our land because every corner of Ukraine is a big family.

And for those who do not understand today's pain of Ukrainians, I will explain in a very simple language.

Imagine, for example, that a neighbor took two children from you. The first child was simply kidnapped and given a new birth certificate. And then they say, well, we didn't take your child. He wanted to live with us. It doesn’t matter that it was at the point of a gun. This is his wish. And, by the way, who told you that this is your child? He has always been ours. Do not worry, it will be better here for him, we have a wonderful orphanage by the sea, under the sun.

And now 5 years have passed. And those who were so worried say that everything seems normal. Your child does not miss you anymore. And in general, it is not very similar to you. Why do they say that? Because it's not their child.

And your other child was locked in the nursery with armed guards. They tell you - what kind of guards? There is no one there. And you hear that right here, next to the wall, your baby is crying, but you can't go there.

Every day it breaks our hearts. And any victories or achievements are incomplete, because our family is incomplete. But the day will come and we will surely get together. For the voice of kindred blood will prevail!

Fellow Ukrainians! We are different. But we are united. We must be united, because only then are we strong. We should understand that we have to count only on ourselves. Not to quarrel over the past, but to unite for the future. Ukrainian-speaking and Russian-speaking, regardless of age, gender, religion - we must be one people. Not on posters, not on slogans, but here. In everyone’s heart. We must move forward, build the country together, do the impossible together and tell ourselves every morning: "I am Ukrainian. And I can do anything!”.

Our land is unique, lovely, unbreakable, incredible, amazing, fabulous, wonderful, beautiful. If it was not for our Homeland, humanity might not even know these words. After all, they were invented to describe Ukraine.

And today it marks the 28th anniversary of Independence. Over the years we have done the most important thing. We have multiplied them. Preserved independence and freedom.

On this important day, we believe that another equally significant date will appear in the Ukrainian calendar. The exact day and month are not important.

For this will be the day when peace comes.