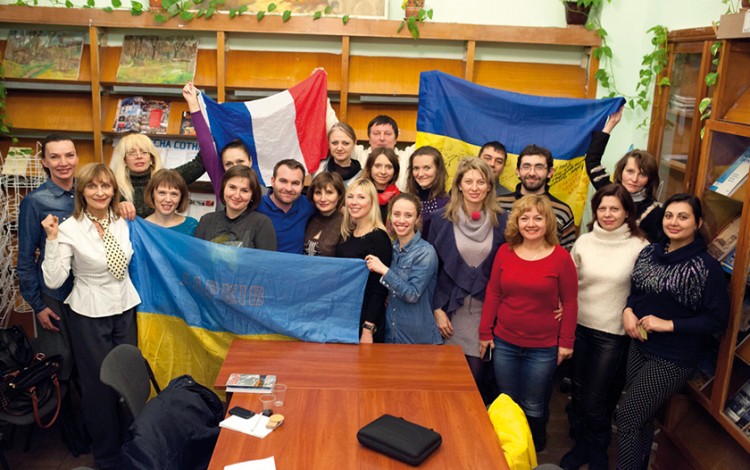 It is often said that Ukraine is currently fighting two wars – the war against Vladimir Putin’s proxy forces in east Ukraine, and the war against the culture of corruption that acts as a cancer throughout the country. Far away from these headline-grabbing themes, Ukraine is also waging a third war – a psychological struggle for a future free from the hatred and depression caused by the conflict.

This third war poses unique challenges for Ukraine. Ukrainian society has only the most rudimentary understanding of mental health issues. The Soviet-era abuse of psychiatry to punish dissidents has given rise to lingering feelings of suspicion towards mental health practitioners, while the macho culture of post-Soviet Ukraine makes it difficult for people to seek the professional psychological support they need. These social barriers must be confronted if the nation is to overcome a growing mental health crisis caused by a conflict that has left tens of thousands maimed or killed, while forcing millions to flee their homes.

With the Ukrainian authorities struggling to meet the most basic requirements of the country’s armed forces and refugee population, the burden of providing psychological support has fallen largely on the volunteer sector. French psychotherapist Nicolas Tacussel is one of a number of international mental health professionals who have volunteered their services. Tacussel is the founder and president of the Smile for Ukraine NGO, which he established in 2015. With a bare bones team of just ten volunteers, he provides psychotherapy support for wounded Ukrainian troops and children orphaned by the conflict. Over the past year, he has worked with 650 soldiers and over 700 children, while also running master classes for 250 Ukrainian psychologists. Tacussel’s approach, which incorporates elements of psychological leadership training, medical hypnosis and kinesiology, focuses on imbuing patients with a renewed sense of purpose and optimism amid the devastation of lost loved ones, missing limbs and disillusionment.

Tacussel’s efforts to provide mental health care for wounded veterans have forced him to confront many of the darkest aspects of the conflict. He speaks about growing numbers of broken homes and unreported suicides, and warns of terrible long-term consequences for Ukrainian society if the issue is not addressed. “The soldiers I encounter have often lost faith in everything and are very bitter. They went to the frontlines to defend their families, but unless they can come to terms with their injuries, they will ultimately lose their families,” he says. One of the key goals of his work, he explains, is to bring light to the inner darkness created by the conflict. “Almost every soldier has a wife, children, and extended family. By helping individual soldiers, you have a positive impact on five or ten people.”

Nimes native Tacussel was first drawn to Ukraine by an ancestral connection. His grandfather was born in Mariupol and lived in the Ukrainian port city until moving to France when he was eight years old. The young Tacussel was fascinated by his grandfather’s tales of Ukraine and was struck by the enduring emotional attachment he felt for a country he’d left at such an early age. “Growing up, I always thought of Ukraine as a woman, and was surprised that my grandmother was not jealous,” he recalls.

Tacussel eventually came to Ukraine in January 2014 at the height of the Euromaidan protests. Frustrated by the often Kremlin-friendly tone of French TV coverage, he says his initial objective was to observe the upheavals firsthand. It was to prove the start of an emotionally exhausting odyssey. He has since become familiar with the rustbelt towns, hospitals and orphanages of east Ukraine’s conflict zone, providing psychological support while struggling against Ukrainian bureaucracy and international indifference. He says he finds continued motivation in the knowledge that his efforts can help shape the country’s future. This is particularly true when it comes to the psychotherapy work he does with children, many of whom have lost their parents in the conflict. “They will be the ones who build the future Ukraine and they desperately need psychological support. We try to help them find harmony and a sense of inner peace. If they grow up in an atmosphere of hatred, it will be a catastrophe for the entire country.”

Tacussel’s Smile for Ukraine NGO is largely self-funded – something made possible by his ongoing psychotherapy work in Paris and master classes across the EU. He is under no illusions regarding the scale of the mental health challenge in today’s Ukraine, and plans to continue working with victims of the conflict for at least the next three to four years. After that, he hopes to be able to pass on his experience to victims in other warzones. “I am planting a seed and I hope it will grow in the years to come,” he says. “There is too much hate in this world. We have a chance here to change people’s lives as long as they are ready to help themselves.”