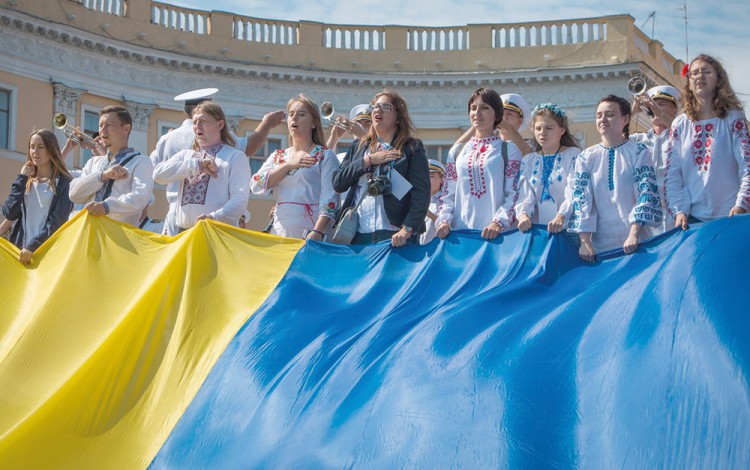 Young Ukrainians celebrate a national holiday in downtown Odesa: many predominantly Russian-speaking cities such as Odesa have witnessed a sharp rise in Ukrainian national consciousness since the start of Russia's hybrid attack on Ukraine in early 2014
Business Ukraine magazine

Ukrainian society has undergone a series of unprecedented shocks in recent years, with the 2013-14 Euromaidan protests spiraling into the Revolution of Dignity, followed in quick succession by the Russian annexation of Crimea and the outbreak of war in the Donbas. The ongoing conflict has killed thousands of Ukrainians and left millions more displaced, while the entire country has struggled ever since early 2014 with wave after wave of social and economic turbulence.

Most observers agree that the historic events of the past four years have changed the way Ukrainians see themselves and relate to their country. Many talk about the birth of a political nation or portray the process in terms of a national awakening. However, existing analysis of these changes has tended to focus on regional differences rather than trying to assess how different generations of Ukrainians have responded. A new nationwide survey commissioned by the New Europe Center has sought to buck this trend and gauge the mood specifically among young Ukrainians. Based on polling conducted in recent months across Ukraine, the “Ukraine’s Youth 2017” survey provides much-needed insight into the opinions of the country’s emerging generation.

The results of the poll present a complex and nuanced picture of attitudes among Ukraine’s youth that challenges stereotypical simplifications of Ukraine and defies attempts to divide the country neatly into eastern pro-Russian and western pro-European camps. While numerous clear regional trends did emerge, they no longer appear stark enough to justify talk of insurmountable regional divides. Indeed, the survey found significant evidence of growing common ground uniting young Ukrainians. This was particularly noticeable on the flashpoint issue of Russian aggression, with a majority consensus emerging on key points and very few respondents willing to adopt openly pro-Russian or anti-Ukrainian positions. These results suggest the divisions that have shaped the political map of post-Soviet Ukraine will become significantly less of an issue as young Ukrainians come of age and the last Soviet generation cedes its dominant role in all spheres of Ukraine’s national life.

The poll also strengthens arguments that the current conflict has been extremely damaging to perceptions of Russia among young Ukrainians. Despite inhabiting the same post-Soviet pop culture universe as their Russian peers, the survey indicates that today’s young Ukrainians take a more detached view of bilateral relations, marking a major departure from the formerly blurred national boundaries and sense of shared identity inherited from the Soviet past.

Instead, the survey identifies a strengthening sense of Ukrainian national identity and relatively high levels of support for European integration. Meanwhile, there was little evidence of enthusiasm for closer ties to Russia. Similar trends have also been evident in recent polls conducted among the wider Ukrainian population, but the focus on young Ukrainians in this poll led to even more pronounced results. This indicates that time is not on Russia’s side as it seeks to regain lost ground in Ukraine. On the contrary, the Kremlin will face an increasingly challenging environment as the new generation of young Ukrainians gains greater influence over the country’s affairs while embracing a stronger sense of Ukranian national identity and looking towards Europe and the wider world for inspiration.

The poll does offer some crumbs of comfort for the Kremlin. Analysis of the results indicates that Ukraine’s emerging generation is still in the process of forming opinions about today’s rapidly changing geopolitical landscape. Responses suggest that many young Ukrainians, particularly those in the country’s traditionally Russocentric southern and eastern regions, are still struggling to come to terms with the new realities of the confrontation with Russia. Respondents in southern and eastern Ukraine were often evasive in their answers to pollsters, with “hard to answer” or “cannot answer” repeatedly appearing as the most popular choices in both regions when it came to relations with Russia.

There are numerous ways to interpret this apparent inability to express a clear opinion on the current conflict. It could be due to fear of contradicting official Ukrainian state positions, or it may reflect profound distrust towards all politicians and media. Equally, it may be rooted in a deep-seated and emotionally driven reluctance to condemn Russia despite the traumatic events of recent years.

Ultimately, this preference for silence suggests the process of accepting the new geopolitical realities in the region is still very much underway. This is particularly true in Ukrainian regions with traditionally closer ties to Russia where younger generations are more likely to have encountered nostalgic attitudes towards the Soviet past. Nevertheless, the relative absence of overtly pro-Russian responses is one of the most striking aspects of the entire survey. While many older Ukrainians still often voice their support for unambiguously pro-Russian positions, there is very little evidence of this trend among the post-Soviet generation. The process of psychological separation that began with the collapse of the Soviet Union in 1991 appears to have reached the point of no return.

The Conflict in Context

Kremlin efforts to depict the Donbas conflict as an exclusively internal Ukrainian affair have failed to convince a majority of young Ukrainians. The poll found that most young Ukrainians (65%) are confident Ukraine and Russia are at war. Nationwide, only 4% disagreed. The northern part of Ukraine demonstrated the highest levels of support for this statement (almost 80%), while in the east the figure was much lower at 35%. Eastern Ukraine also registered the highest number of young Ukrainians who disagreed, but even this 9% total was a mere quarter of those in the region who agreed. Despite much talk of Moscow’s information war successes, these results suggest that Russian narratives have gained little traction among young Ukranian audiences.

Unsurprisingly, an overwhelming majority of young Ukrainians do not support Russia’s annexation of Crimea. Nationally, 68% of respondents rejected the annexation, with the spread ranging from 43% in eastern Ukraine to 85% in the north of the country. Meanwhile, support for the annexation was in the low single digits nationwide. Interestingly, this was one of a number of Russia-related questions where northern Ukrainians expressed the strongest opinions, indicating that it may no longer be entirely accurate to talk of western Ukraine as the heartlands of Ukrainian national identity.

Who is to Blame?

Most young Ukrainians (61%) believe Russia is responsible for the current armed conflict in eastern Ukraine. Despite widespread expressions of distrust towards the Ukrainian authorities, a mere 5% of those polled blamed Ukraine for the conflict. However, this issue produced some of the most pronounced regional differences. While around 80% of respondents in northern and western Ukraine blamed Russia for the conflict, this figure dropped to 36% in the south and just 22% in the east. Nevertheless, there was also a marked reluctance in these regions to blame Ukraine, with just 6% of young southern Ukrainians and 13% of their peers in eastern Ukraine willing to do so. Instead, more than half of respondents in both southern and eastern Ukraine preferred to evade the question entirely.

It is not hard to understand why Russian responsibility for the war in eastern Ukraine is a particularly painful and complex theme for young Ukrainians. In many cases, recognizing Russia as the aggressor means revisiting all manner of cherished memories and long-held beliefs. It causes tensions with Russian relatives and often leads to the breakup of extended families. In the circumstances, many young Ukrainians clearly prefer to avoid adopting a definitive position on the issue.

A sense of injustice seems to have helped bolster support for anti-Russian sanctions among young Ukrainians. For instance, every third young Ukrainian is convinced that sanctions against Russia should remain in place until Ukraine regains control over the Donbas and Crimea, while only a tiny minority of 2% expressed the opinion that “sanctions should have been lifted long ago”. Meanwhile, around 12% support the idea of lifting sanctions in line with adherence to the Minsk-mandated peace process, or as Russia complies with its obligations to withdraw from eastern Ukraine and return control of the international border to the Ukrainian authorities.

Glimpse of the Future

The “Ukraine’s Youth 2017” survey is a welcome addition to our understanding of opinion in a country undergoing historic change. By focusing on young Ukrainians, this poll offers a glimpse of the attitudes that will shape Ukraine in the decades to come. While it is still far too early to draw any definitive conclusions, the survey paints a persuasive picture of an increasingly united generation of young Ukrainians who see their future in Europe and hold Russia responsible for bringing war to their country. It also underlines continuing regional differences of opinion and hints at worryingly high levels of distrust towards the Ukrainian authorities. These are major challenges that the country must confront in the coming years, but Russia’s ability to influence this process from the outside appears to be entering into a period of unprecedented decline.

This article is based on analysis provided by New Europe Center’s Kateryna Zarembo and Sergiy Solodkyy of the nationwide “Ukraine’s Youth 2017” poll conducted by the New Europe Center and Friedrich-Ebert-Stiftung in cooperation with GfK Ukraine.