Life in the Gray Zone 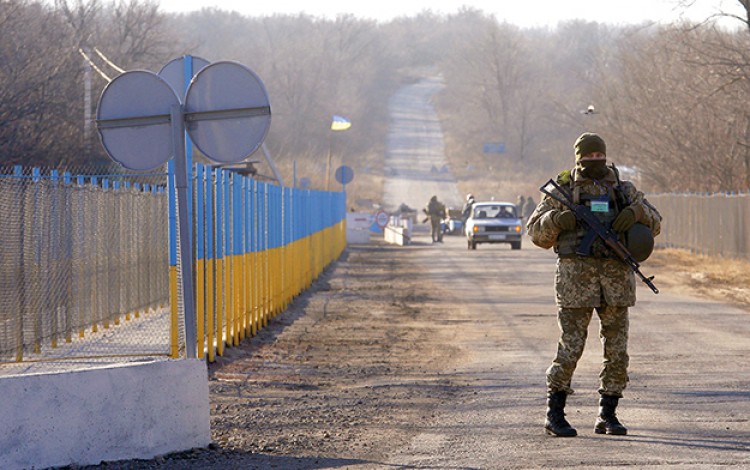 Living with the realities of Putin's forgotten war: 800,000 Ukrainian civilians are currrently living in the so-called 'gray zone' close to the contact line between Ukrainian troops and hybrid Russian forces in eastern Ukraine
Stuart Linder

There are few things more endearing than watching a pensioner double over with hearty laughter. It makes you forget that Svitlodarsk is located in the gray zone, approximately 12km from the contact line separating Ukrainian and separatist controlled territory. Life in this virtual no-man’s-land continues, but the plight of residents is often overlooked by the outside world.

According to the United Nations Office for the Coordination of Humanitarian Affairs (UN OCHA), as of 18 October 2016, 3.1 million people in Ukraine are in need of humanitarian assistance. 1.7 million are officially registered as internally displaced persons (IDPs). Meanwhile, an estimated 800,000 conflict-affected people live in “gray zones” along the highly militarized and poorly served contact line. These people are among the most vulnerable in Ukraine. Many are not IDPs because they never left their homes. Civil society organizations such as the Right to Protection (R2P) play a critical role in sustaining life in these areas by providing aid and services to these people every day.

A day in the life of Svitlodarsk

In early November, I accompanied an R2P community assistant in North Donetsk, shadowing her as she accomplished her daily tasks. R2P’s 40 community assistants, who are often displaced persons themselves, work at the grassroots level with IDPs and conflict-affected populations in Dnipro, Kharkiv, Zaporizhzhia and government controlled Donetsk and Luhansk regions to help address their everyday problems.

We set off from Sloviansk at 8am. Sloviansk is 100km north of the city of Donetsk. It is small and safe. To see the city today, you would never realize that on 12 April 2014, Sloviansk was the first city to fall to Kremlin-backed separatists under the command of Russian citizen Igor Girkin (aka “Strelkov”). Ukrainian authorities liberated Sloviansk in early July 2014..

After passing Bakhmut (formerly Artemivsk), the road becomes noticeably bumpier, even by Ukrainian standards. As we draw closer to the contact line, we pass abandoned pillboxes, destroyed dachas, and checkpoints fortified with anti-tank spikes. Machines of war lie in wait. The Svitlodarsk bulge still sees combat sometimes, as do many places along the contact line.

Svitlodarsk is strategically important because it is home to a huge power plant. On one side of a beautiful artificial lake lies the town of Svitlodarsk itself. The plant is on the other side. Svitlodarsk literally means ‘creator of light’, which is a great name for a power plant city. The population of Svitlodarsk do not qualify as displaced for the simple reason that they never left. Nevertheless, the conflict-affected population often has as great a need for support as IDPs from the nearby so-called Donetsk and Luhansk National Republics.

As we enter the town, it is striking how ordinary Svitlordarsk seems. The town is green and full of life. People go about their daily routines much as they do elsewhere in provincial Ukraine. The facilities look on par with those of similar Soviet-era towns. Although much war damage has been repaired, evidence of the conflict remains. The town was heavily shelled. A resident shows me the ruins of her garage. Metallic scraps of the Grad rocket that hit it are still visible on top of the rubble pile. Housing, land and property (HLP) issues constitute a major need throughout eastern Ukraine. In this respect, Svitlodarsk is entirely typical.

The highlight of the trip is a visit to the pensioners’ clubhouse. The room contains pensioner-made crafts, clothing pin designs, drawings, needlework and more. The ringleader is an adorable ethnic Russian of about 70 with short light brown hair, almond eyes, a few gold teeth and a contagious laugh. She moved to Svitlodarsk from Siberia about 45 years ago and used to operate heavy machinery at the local power plant. Although I cannot understand her very well, the positive energy she exudes makes the clubhouse a place you just don’t want to leave. One of the pensioners gives me one of her origami-like masterpieces. It is currently displayed in my office, directly to my left as I write this account. This pensioner never left Svitlodarsk, even during the heaviest fighting. Her eyes fill with tears as she tells me how the windows in her flat were blown out and she was left without utilities for days.

Support for this community is limited. R2P provides legal awareness raising sessions to local pensioners along with individual legal advice. Other organizations provide community-building activities. Although providing these pensioners with crafts is not a lifesaving form of aid, it raises their quality of life tremendously by providing a vital social outlet.

The most surprising aspect of my visit was the seeming normalcy of Svitlodarsk. Life goes on in the gray zone and these communities persevere despite facing numerous daily challenges stemming from their physical proximity to the contact line. In particular, infrastructure, freedom of movement, access to social payments and services, and preparation for winter are among the most acute issues in the gray zone. Although providing services to vulnerable gray zone communities like Svitlordarsk is a key priority for Ukrainian civil society, more resources and attention are required to make life function as it should for those who remain.

About the author: Stuart Linder (This email address is being protected from spambots. You need JavaScript enabled to view it.) is a development officer with the Right to Protection (r2p.org.ua) which works in partnership with global refugee aid NGO HIAS.