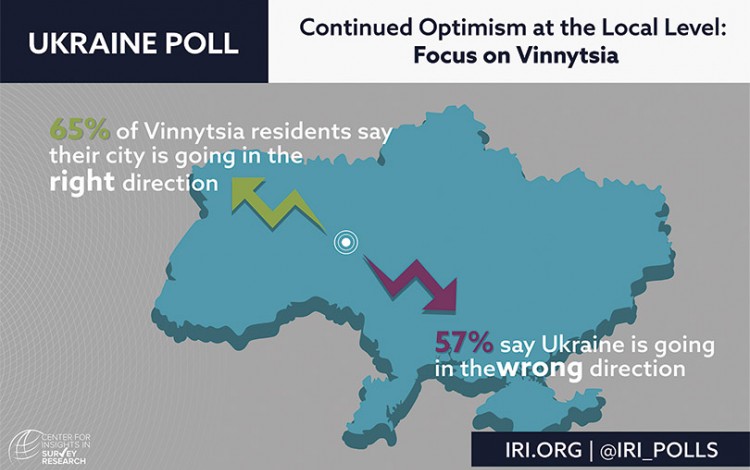 In today’s Ukraine, pessimism at the national level is a well-established phenomenon and one that often obscures the very real progress that is taking place at the local level. In fact, since 2015 the local picture has often been strikingly optimistic across Ukraine, at least according to polling data compiled by the International Republican Institute (IRI). For the past four years, residents of Ukraine’s largest cities have consistently noted an improving municipal environment while expressing optimism in their local governments and voicing a more positive outlook for the future economic prospects of the locality.

Many see this relatively positive but markedly localized perspective as the fruit of Ukraine’s decentralization reforms. Far-reaching financial and administrative decentralization legislation passed by the Ukrainian parliament in 2014 and 2015 is now allowing mayors and city councils across the country to work with greater shares of tax revenue than ever before. This is providing local authorities with the ability to spend on projects previously managed by appointed oblast-level administrators or handled even higher up the national administrative food chain. This decentralization reform process is in many ways a remarkable achievement worthy of far greater international attention, especially as it is taking place despite the ongoing conflict in eastern Ukraine, the continued occupation of Crimea, and an economy still trying to find its footing following the shocks of 2014-15.

The International Republican Institute is in a good position to assess the impact of decentralization reforms on Ukrainian attitudes towards local government. With the recent release of its fourth annual Ukraine nationwide municipal survey, the IRI now has four years of tracking data indicating how these reforms are affecting Ukrainian municipalities. The annual survey, which has been carried out every year since 2015, sought the opinions of more than 19,000 Ukrainians from regional oblast centers across Ukraine. The survey results for 2018 include responses from Mariupol and Severodonetsk as proxies for the traditional regional centers in the Donetsk and Luhansk oblasts.

The results of the 2018 survey offer a window into the realities on the ground in regional centers that international coverage of Ukraine often overlooks. Understanding developments at the sub-national level in Ukraine is critical to understanding where Ukraine is heading at the national level. This is particularly important given the dominance in national and international media coverage of large set-piece reforms such as the anti-corruption court, future IMF tranches and the persistently pessimistic national political outlook.

In addition to highlighting local-level successes, the latest survey confirms long-term trends indicating that many of the reforms passed by parliament since 2014 are having a positive impact on communities throughout the country. Roads and kindergartens have been built and public spaces refurbished, while administrative services have been streamlined and made more efficient and transparent. All this is because of national government initiatives, but with the results taking root far from Kyiv, this progress tends to go largely unrecognized beyond the local communities themselves.

Several interesting new findings from across Ukraine’s cities include signs of cautious optimism that the economic situation may improve in the coming year. While high inflation and energy tariffs negatively impacted perceptions of the national trajectory, at the local level residents are clearly seeing the local economies of their respective cities improve. Additionally, in 17 out of 24 surveyed cities, residents noted a significant improvement in the quality of roads from 2016 to 2017, while only three cities felt that road quality had actually worsened.

These findings suggest that as cities have gained the ability to allocate more tax money for municipal projects, road repair works have improved markedly. As noted in IRI’s 2017 survey, travel between Ukrainian cities (with the exception of Kyiv) is still remarkably infrequent. This is at least in part due to the poor quality of roads and related infrastructure. This year’s improvements at the municipal level, together with last summer’s intensive road repair works on several major inter-city highways, bode well for increased interconnectivity across Ukraine.

Despite these successes, which are attributable to both local and national authorities, national leaders are not receiving any of the credit. Instead, local mayors and city councils have capitalized on the public credit they have received to proactively effect public change.

With national elections scheduled for 2019, it is imperative that political parties at all levels, but particularly on the national stage, communicate their successes to the Ukrainian people and make the connection clear between national decentralization reforms and improving circumstances at the local level. In doing so, political leaders at all levels should make it clear that decentralization is not just a victory for local government. Decentralization is both a product of a national initiative and a platform capable of building better outcomes for the entire country.

About the author: Michael Druckman is Resident Program Director for Ukraine at the International Republican Institute