Ukraine's sense of national self-awareness has been hugely consolidated by the historic trials and traumas of the past eighteen months, and nowhere is this strengthened sense of national identity more tangible than on Maidan 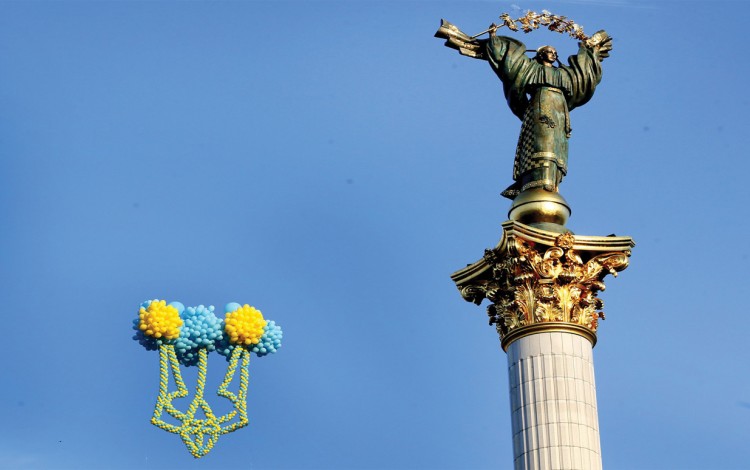 When I first arrived in Ukraine in the late 1990s, Kyiv’s Independence Square (Maidan Nezalezhnosti) was still dominated on one side by a gigantic communist hammer and sickle facade, while the imposing Moskva Hotel loomed over the entire square, monopolizing the skyline. These twin reminders of the Kremlin’s overbearing influence on Ukraine seemed to serve as symbols of a pseudo-independence which many ordinary Ukrainians struggled to take seriously, and some openly mocked. Eventually, the hammer and sickle were removed and the hotel was renamed, but the sense that Ukraine remained in some kind of geopolitical limbo lingered.

Meanwhile, Independence Square was given a makeover, becoming a shopping mall featuring an eclectic array of architectural elements which reflected the lack of consensus over the nature of Ukraine’s post-Soviet national identity. The new-look Independence Square finally gained gravitas as a national landmark when it served as the epicenter of the 2004 Orange Revolution, but this status proved surprisingly fragile and was largely eroded by the subsequent failure of the Orange revolutionaries to live up to the initial optimism of the uprising. Instead, Independence Square reverted to its previous existence as a largely apolitical arena, popular for live concerts and favored by ice cream-munching day trippers. Maidan, as it is universally known to Ukrainians, still served as a venue for occasional political rallies, but in the jaded and cynical post-Orange Revolution environment, these attempts to ape the people power protests of 2004 were widely distrusted and seen as manufactured counterfeits.

"The events of the past eighteen months will likely come to be seen as the period in history when the Ukrainian nation finally came of age, and nowhere is this emerging sense of national self-awareness more visible than on Maidan"

All this changed during the Euromaidan protests of winter 2013-14. Against all expectations, millions of ordinary Ukrainians once more flocked to Maidan to demand social justice. The square played such a central role in proceedings that it actually lent its name to the entire protest movement. For the second time in a decade, Maidan became the focal point of a popular uprising in support of European values and democratic freedoms. This status as the country’s main national stage was consecrated with the blood of the Heavenly Hundred, whose deaths on and around Maidan in early 2014 marked the terrible climax of the protest movement. Along the way, the very word ‘Maidan’ entered the international lexicon as a term for popular protests against authoritarian regimes.

Today, Maidan is no longer a venue for pop concerts and garish public holidays. Festivities are now generally held on Kyiv’s other central squares. Maidan has become a sacred place where people come to pay their respects to the victims who died there in early 2014, and to those who have since given their lives in the defence of Ukrainian independence. It is no coincidence that Maidan regularly hosts memorial ceremonies for fallen soldiers, or that it now serves as the essential destination for all visiting dignitaries. What was once a square of mixed meaning, which seemed to reflect Ukraine’s incomplete independence, has instead become a spiritual lodestar for the entire nation and a powerful symbol of the new Ukraine. The events of the past eighteen months will likely come to be seen as the period in history when the Ukrainian nation finally came of age, and nowhere is this emerging sense of national self-awareness more visible than on Maidan.