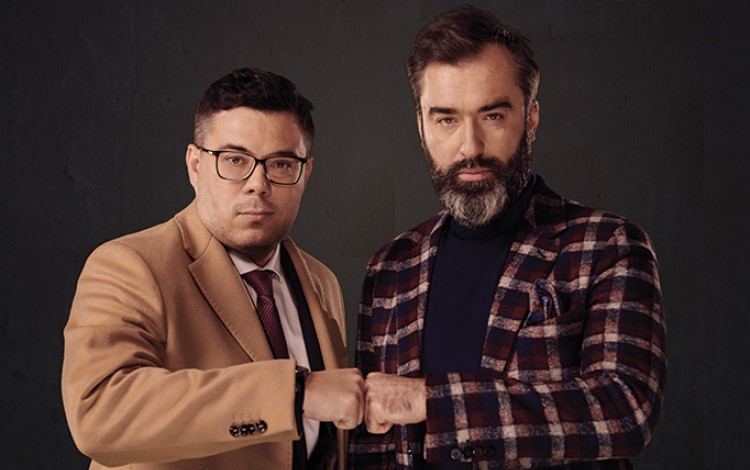 With Ukraine currently at the center of a geopolitical showdown between Russia and the Western world, it has never been more important for Ukrainian audiences to have a solid grasp of contemporary international affairs. This is where TV presenter double act Peter Zalmayev and Taras Berezovets aim to make their mark.

The duo host weekly news review show The Week on Ukraine’s Pryamiy channel. Each Saturday evening, they provide analysis of the biggest global headlines from the past week, with a particular focus on Russian hybrid war activities around the world that serve as extensions or echoes of Ukraine’s own struggle with the Kremlin. “One of our main goals is to be educational,” says Berezovets. “This often means providing our viewers with the necessary background and explaining the broader context of international events. After all, politics does not exist in a vacuum.”

Berezovets and Zalmayev bring considerable international experience to their current roles. Crimean native Berezovets studied as an undergraduate and postgraduate in the UK, while Donetsk-born Zalmayev left the Donbas for the United States in the mid-1990s before finally returning to Ukraine as the Russian offensive of spring 2014 unfolded. This international experience informs their outlook as well as their broadcasting style. “For a long time, I was a Ukrainian voice in the West. Now I’m a Western voice in Ukraine,” quips Zalmayev.

Each episode of The Week features four studio guests, but the stars of the show are undoubtedly the hosts themselves. Berezovets and Zalmayev enjoy on-screen banter and try to liven up the often stuffy subject matter of international affairs with liberal sprinklings of quirky humor. One typical scene during a recent show saw the pair dressed up as faux royalty for a brief skit about the birthday celebrations of the UK’s Prince Charles, while Berezovets in particular has a reputation for quick-witted repostes.

These lighthearted interludes are a deliberate feature of the show, reflecting the influence of groundbreaking US current affairs comedy hits such as The Daily Show and Last Week Tonight. “Nothing engages people quite like comedy,” says Zalmayev. “Ukrainian TV could really benefit from more humor in its current affairs coverage.”

Ultimately, of course, most of the themes covered in each episode of The Week are no laughing matter. The show addresses the very real drama of the new Cold War and tries to provide Ukrainians with a realistic picture of where their country stands amid the hybrid hostilities of the current confrontation. Both hosts argue that a clearer understanding of the international environment is essential for today’s Ukrainian audiences as they seek to make sense of the choices facing the country.

“It is fair to say that many Ukrainians continue to see international affairs through rose-tinted glasses,” says Berezovets. “They think Ukraine has the support of the entire international community and tend to believe this will last forever. In reality, there are no such guarantees. The current unity of the West is fragile and could end at any moment. That is why it is so important for Ukrainian viewers to know how things really stand.”