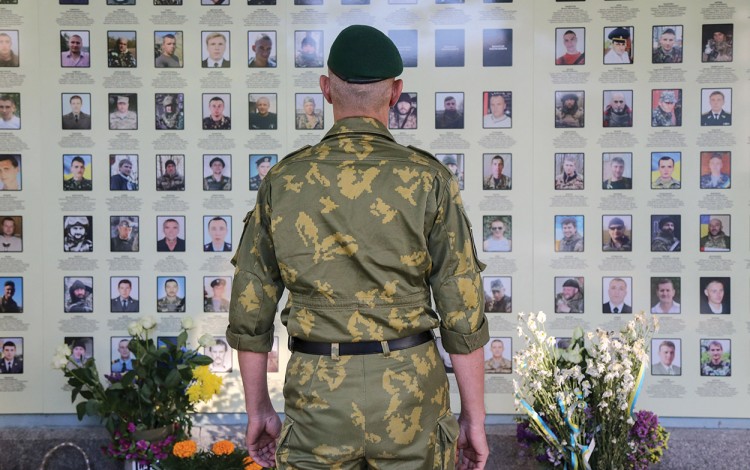 Thousands of Ukrainians have died since the outbreak of an undeclared and ongoing war with Russia in 2014. Prior to the Russian invasion of 2014, post-Soviet Ukraine had no experience of dealing with the trauma of military conflict
Business Ukraine magazine

Autumn 2019 will see the official launch of Lifeline Ukraine, the country’s first fully professional suicide prevention and mental health support hotline. Recruitment of counsellors has focused on Ukraine’s pool of approximately 400,000 combat veterans from the country’s undeclared but ongoing war with Russia. After completing training with international specialists in veteran mental health issues, they will begin working around the clock at the Lifeline Ukraine offices in Kyiv’s riverside Podil district.

The launch of Lifeline Ukraine cannot come too soon. Mental health problems among former military personnel are a major social issue in today’s Ukraine, and one that the country remains uniquely ill equipped to address. Prior to the Russian invasion of 2014, post-Soviet Ukraine had no experience of dealing with the trauma of military conflict, or of providing support for those left damaged by war.

This was just one of the many ways in which Ukraine was completely unprepared for the onset of Russian aggression. Understandably, the country initially focused attention on defending itself against the immediate military threat, but the accompanying mental health challenges created by the conflict have since made themselves abundantly apparent.

There are no exact figures available for the number of suicides among serving Ukrainian military personnel and veterans, but experts believe at least 900 have taken their own lives since the start of hostilities five-and-a-half years ago. Some speculate that the real number may be far higher, pointing to incomplete monitoring of veterans and question marks over the recording of frontline deaths.

The war has also taken a huge toll in terms of broken marriages and families destroyed by a vicious cycle of domestic violence, depression and substance abuse. With hundreds of thousands of Ukrainian veterans hailing from every corner of the nation, this is a genuinely nationwide problem touching every city, town and village in the country.

Lifeline Ukraine receives funding from the British Embassy in Kyiv and is part of the wider All4One veteran support initiative led by the East Europe Foundation. The idea for a nationwide hotline first emerged in the Ministry of Health in 2016 during the early days Dr. Ulana Suprun’s tenure as Acting Health Minister.

It is in many ways fitting that the initiative began with Suprun. The American-born former minister, who left her post in late summer 2019 following the appoint of a new government, first rose to prominence in Ukraine for her work improving medical support for battlefield casualties in eastern Ukraine during the height of the fighting in summer 2014.

Firsthand knowledge of frontline conditions came hand-in-hand with an awareness of the mounting mental health crisis facing the country as large numbers of Ukrainians sought to return to civilian life while struggling to cope with the horrors they had encountered.

Suprun and her team began developing the concept of a nationwide suicide prevention hotline based on best international practices, before inviting Kyiv-based Irish businessman, writer and political commentator Paul Niland to become the founder of what would eventually evolve into Lifeline Ukraine.

For Niland, setting up the hotline was a way of giving something back to the men and women who had sacrificed so much for his adopted homeland. Having lived for the past sixteen years in the Ukrainian capital, he describes it as an honor to support the country’s veteran community. “They have literally put their lives on the line to protect us,” he says.

Niland stresses that suicide among military veterans is not a problem exclusive to Ukraine. On the contrary, it is a major issue any nation engaged in armed conflict must face. Indeed, many Western countries are currently struggling to cope with long-term mental health challenges related to their own veteran communities. The Lifeline Ukraine team has sought to tap into this experience as they have developed the concept to fit the specifics of the Ukrainian environment, working closely with experts from a number of countries ranging from Australia to Canada.

One of the biggest challenges the project faces is persuading veterans to ask for help. Mental health issues remain largely taboo in Ukrainian society, where the prevalence of traditional machismo culture has long fueled a “boys don’t cry” mentality that leaves many feeling they must suffer in silence. This has created additional psychological barriers for veterans struggling to come to terms with their experiences, while also making it difficult for relatives and family members to seek out the support their loved ones so clearly need.

Niland hopes the policy of recruiting and training fellow veterans to work as counsellors will enable Lifeline Ukraine to overcome this considerable obstacle. “People will not be calling up to speak to a psychiatrist. They will be talking to a comrade, to a brother in arms. There is no stigma in that.”

The people behind Lifeline Ukraine hope that it can serve as a flagship for raising mental health awareness in the country. While the project currently concentrates on providing support for veterans, the structure of Lifeline Ukraine will enable it to eventually expand and become a nationwide mental health and suicide prevention service for the entire country.

Such a service is long overdue. According to World Health Organization figures for 2018, Ukraine currently ranks in eighth position internationally in terms of suicide rates among the population. It is one of a staggering six post-Soviet countries to feature in the global top ten (Lithuania is in first position followed by Russia in second place, Belarus in fifth, Kazakhstan in seventh, and Latvia in ninth). This hints at a vast mental health crisis across the whole of the former USSR, making initiatives like Lifeline Ukraine even more urgent.

If the project proves successful, it may go on to provide important lessons for Ukraine’s fellow former Soviet republics. For the time being, however, Niland remains focused on doing whatever possible to help Ukraine’s veterans. “This is the section of Ukrainian society most deserving of our support right now,” he comments. “If we can say that we have saved a single life, everything will have been worth it.”