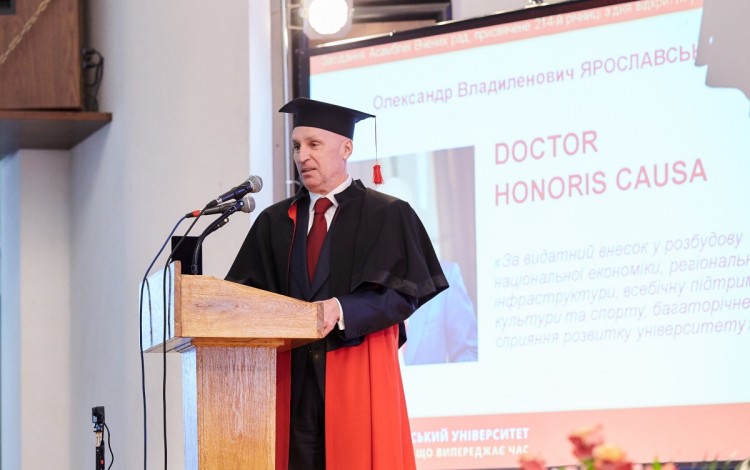 Ukrainian businessman and Kharkiv native Oleksandr Yaroslavsky received an honorary doctorate from Karazin National University in a 29 January ceremony in the eastern Ukrainian city. The university, which currently ranks as Ukraine’s leading institute of higher education according to the 2018 World University Rankings, recognized Yaroslavsky for his contributions to the Ukrainian economy as well as his support for the development of business, sports and academic life in his hometown. He joins fellow honorary doctors of the university including Johann Goethe, Leo Tolstoy, Ivan Franko and Boris Paton.

“For more than two centuries, this university has awarded the title of honorary doctor to people who have done a lot for education, science, the city, the region, and the country. We are happy to recognize the contributions Oleksandr Yaroslavsky has made to Ukraine, the Kharkiv region, and our university. This honorary doctorate is a sign of our gratitude for his many years of support for the university,” said Kazarin National University Rector Vil Bakirov.

In his address to students, Yaroslavsky congratulated the university with the anniversary of its foundation, which is marked on 29 January each year. “First of all, I would like to congratulate Karazin National University on its 214th anniversary and wish the university many more centuries of prosperity. Empires rise and fall, governments and prime ministers change, but science and education are eternal. I will be sincerely grateful for the opportunity to continue contributing to the development of the university.”

During the ceremony, Yaroslavsky also presented the university with a subscription to the databases of Oxford University Press, allowing students and academics access to a vast array of Oxford University journals and papers. “This database is from the best university publisher in the world,” commented Rector Bakirov. “This is something no other Ukrainian university can boast, and it is an invaluable gift for everyone from undergraduates to our leading academics.”

Yaroslavsky’s DCH Group has invested over USD one billion in the development of the Kharkiv region, including USD 300 million in Kharkiv’s preparations to serve as a host city during the UEFA Euro 2012 football championship. Yaroslavsky regularly meets with Kharkiv students to share his business insights and discuss the development of the city. In addition to Karazin National University, he has provided support to a number of other institutes of higher education in the city including Kharkiv Polytechnic Institute, Kharkiv Food Technology University, and Kharkiv National University of Urban Planning, where he also holds an honorary doctorate.