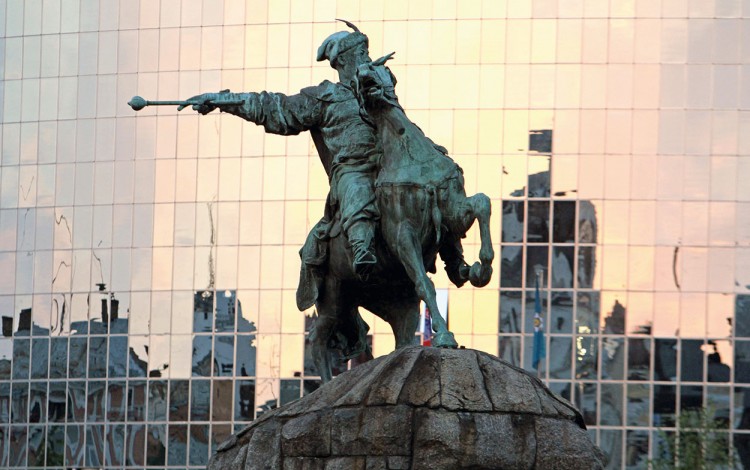 The Kremlin’s long-running efforts to denigrate Ukrainian identity and culture were on full display in early June when a Russian judge convicted the head of the country’s only state-run Ukrainian literature library located in Moscow for “extremism.”

A municipal court on 5 June in the Russian capital gave Natalia Sharina, a native Muscovite and ethnic Russian, a four-year suspended sentence for “inciting national enmity or hatred.” Ostensibly, it was because a banned book authored by a Ukrainian nationalist was found at the library. Ms. Sharina insists the book was planted at the library, which was established in 1989 during the twilight of the Soviet Union.

Human rights groups, including London-based Amnesty International, Russia’s Memorial and the Kharkiv Human Rights Protection Group, as well as pro-Ukrainian advocacy groups, denounced Ms. Sharina’s prosecution. The former chief librarian, age 59, was also given a four-year probation term and told the court the case was not about a single book among the 52,000 periodicals and books that she oversaw.

“The state prosecutor herself admitted during the proceedings that this was a political case,” Ms. Sharina told reporters after the ruling. “Not one single book featuring on the current list of extremist literature today was present. People will probably recall this in a couple of decades in the same way as we remember 1937” [the height of the Stalin-era show trials].

Ever since Ms. Sharina was placed under house arrest in October 2015, rights groups have condemned her prosecution at an institution that has roots dating to 1918. The library survived the Stalinist terror of the 1930s before Soviet dictator Joseph Stalin eventually ordered its closure in 1949. It reopened almost a half-century later. Russian authorities are currently shuttering the institution, which also held events that included lectures by Ukrainian artists and renowned writers, concerts, and informative gatherings on Ukrainian history and culture.

The librarian has clearly been caught in the crossfire of deteriorating Kyiv-Moscow relations that started in February 2014 when Russian soldiers invaded and subsequently annexed Ukraine’s Crimean peninsula. In April of the same year, Moscow started a hybrid war in the easternmost Donetsk and Luhansk oblasts that has led to more than 10,000 deaths, with some 2 million displaced and 7 percent of Ukraine under de facto Russian occupation.

Whereas Amnesty International called Ms. Sharina’s persecution a “demonstration of utter contempt of the rule of law” and Memorial labeled her as a “prisoner of conscience,” other analysts and advocacy groups see a deeper trend. “This is a logical step in Russia’s national policy to humiliate Ukrainian history, particularly in the last three years,” commented Andriy Okara of Moscow’s Center for Eastern European Studies. “This criminal case was invented.” He noted that the institution never had a “huge following,” but that once the authorities started their case, they “could do whatever they wanted to repress the library,” and in doing so, “they [authorities] destroyed the individual.”

The overall goal, according to advocacy groups like the Ukrainian Congress Committee of America (UCCA), is to “continue persecuting Ukrainian minorities in Russia” who are the nation’s second largest minority with 5-10 million residing there. Russia’s latest census conducted in 2010 says that over 1.9 million people identify themselves as ethnic Ukrainians.

“It’s a well-calculated effort to choke the Ukrainian community. And we condemn that,” commented Andriy Futey, president of the UCCA. “It’s something over the years that we, as an integral member of the Ukrainian World Congress, have been raising with our government in the United States. This is selective persecution [and Ms. Sharina was used] to make an example.”

The UCCA president noted that, although Ukrainians are Russia’s second largest ethnic minority and Russia is home to the world’s largest Ukrainian diaspora, there are no educational institutions that teach the language. Of the so-called Sunday schools that do exist in Siberia and the Russian Far East, where large Ukrainian enclaves live, local budgets have cut off funding.

Public domain research shows that weekly Ukrainian-language schools have been closed in St. Petersburg, Voronezh, Khanty-Mansiysk, and Vladivostok. Only one of the eight previous Ukrainian-language classes remains in Tyumen, a rich oil town to which many qualified Ukrainians migrated for work. Only one class remains in Surgut. The only class in Petropavlovsk-Kamchatsky has shuttered. In 2008, the Ukrainian Educational Center was closed at a Moscow primary school.

“This is a continued Russification effort. You have Russian President Vladimir Putin and others saying Ukrainians don’t exist, [that] Ukraine is not a nation – so this is an effort to subjugate the Ukrainian people and try to break them,” added Mr. Futey.

He was referring to controversial public statements that Russian President Vladimir Putin has made, including one in April 2008 at a NATO summit and this year in Paris after Emmanuel Macron was elected as French president. Speaking to then-US President George W. Bush, the Russian leader said, “Ukraine is not even a state. What is Ukraine? Part of its territories are in Eastern Europe, but the greater part is a gift from us.”

After meeting with the newly elected French president recently in Paris, Mr. Putin told a room full of journalists that Princess Anna – the daughter of medieval Kyiv ruler Yaroslav the Wise who married France’s King Henry I in the 11th century – was “Russian”. This claim came despite the fact that neither the country of Russia nor the polity of Moscow existed at the time. Mr. Futey commented: “Russia is usurping our history, identity and culture.”

Closure of the Ukrainian library and the subsequent persecution of its chief librarian is “symbolic,” said Olexiy Haran, a political scientist and professor at the National University of Kyiv-Mohyla Academy. “Moscow wants to show that it is fighting ‘nationalism.’ It’s all about propaganda to discredit Ukraine internally and partially for foreign audiences,” he added.

Part of the Kremlin’s agenda towards Kyiv is to portray, “Ukrainian identity as dangerous in a general civilizational discourse,” said Yaroslav Hrytsak, professor of history at Lviv’s Ukrainian Catholic University. “Everything that Ukraine does well is considered ‘Russian,’ while anything negative is ‘Ukrainian. This is part of Russia’s cultural war against Ukraine.”

Prof. Hrytsak knows the person who wrote the initial petition that eventually got the Ukrainian library director arrested, as does Mr. Okara. Whereas the Russian political scientist described Sergei Sokurov as a “Ukraino-phobe,” the UCU historian said he led the Russian Society in Lviv during the late 1980s before moving to Moscow. “At that time he was liberal-minded, as long as Ukrainian identity and culture was considered part of Russian identity and culture,” Prof. Hrytsak commented.

There are clear indications that Russia’s efforts to deny Ukrainian identity are losing ground as the tides of history turn against the Kremlin, but few expect any belated recognition from Moscow any time soon. “Ukraine and Russia are departing,” Lviv-based professor Hrytsak noted. “Russia’s next step would be to start burning [Ukrainian] books. Russia is not only aiming to destroy Ukrainian identity. It also wants to reduce Ukrainians to the status of an ethnic group of popular song and dance but not of high culture that would give it national status. This would imply political rights like national self-determination.”

A version of this article appeared earlier at The Ukrainian Weekly and is reproduced with permission.