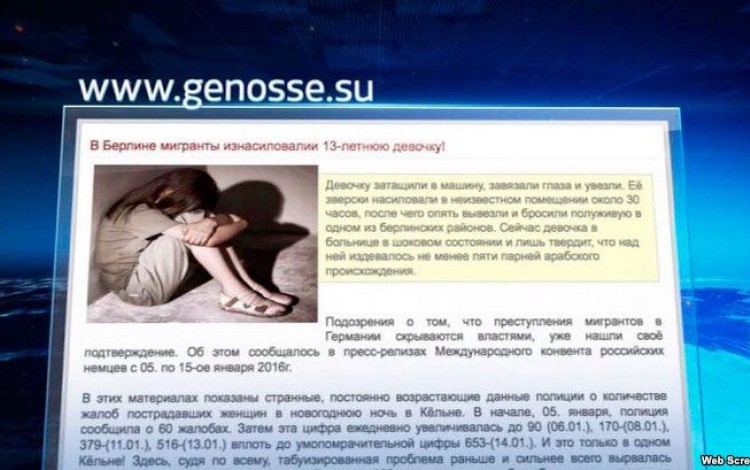 Germany got a first-hand taste of Putin’s hybrid war tactics in late January, leading to accusations that the Kremlin media and Moscow officials had incited the country’s Russian immigrant community to stage mass protests over a fictitious atrocity.

Thousands of Russian immigrants took to the streets of German cities on 23-24 January following the kind of carefully calibrated Kremlin propaganda campaign previously used to destabilize Ukraine. In the days prior to the protests, the Russian media had whipped Germany’s Russian-speakers into a frenzy over claims that a 13-year-old Russian girl had been gang raped by ‘Arabic-looking’ immigrants. Numerous Russian politicians poured fuel on the fire with incendiary comments about the alleged crime, while Russian Foreign Minister Sergei Lavrov added to the scandal by publicly raising his concerns about a potential German cover-up.

There was only one problem – there was no rape. German officials have since reported that the alleged victim spent the night of her absence with an acquaintance. The investigation is ongoing, but the incident has already raised serious concerns over the ability of the Kremlin to destabilize countries with large Russian-speaking populations via the use of Kremlin-controlled media and other infowar tactics first honed in Ukraine.

Russian infowar from Ukraine to Germany

The nature of the Russian information attack against Germany will be all too familiar to Ukrainian audiences. The key element of the attack was a fake atrocity. In this instance, it was the alleged gang rape of a young girl. In the case of Ukraine, it has been everything from a crucified toddler to raped grandmothers. Kremlin media coverage of these fake atrocities has typically been lurid and emotionally charged, featuring lies, distortions and unsubstantiated claims.

In a direct repeat of the campaign against Ukraine, the Kremlin-controlled Russian mainstream media served as the initial vehicle for the dissemination of the German fake atrocity story. The allegations then spread throughout social media, before reaching international outlets. Vocal condemnations from Russian politicians lent further credibility to these atrocity allegations, much as Russian politicians and diplomats had earlier voiced their horror over ‘Ukrainian fascists’.

Putin and the far-right

The protests themselves also offered alarming echoes of recent Russian tactics in Ukraine. Russian protesters in Germany made common cause with local anti-immigration groups and neo-Nazi parties, mirroring the unholy alliances with post-Soviet extremist groups that have marked the Russian hybrid war in Crimea and east Ukraine.

This development will come as no surprise to regular Kremlin watchers - despite publicly claiming to be a bastion against modern-day fascism, the Putin regime has repeatedly demonstrated a readiness to ally with far-right groups within the EU and stands accused of financing an array of extremist European political parties. The late January protests across Germany provided an indication of where this could eventually lead if anti-immigration sentiment continues to grow in the European Union.

Within days of the gang rape allegations first coming to light, Russia had succeeded in stirring up an international scandal over an alleged German cover-up, forcing Berlin onto the defensive and sparking a diplomatic spat. German officials registered their outrage over what they termed as Russian attempts at incitement and threatened to prosecute Ivan Blagoy, one of the Russian correspondents responsible for some of the more explosive and misleading allegations. Norbert Roettgen, who chairs Germany’s Foreign Affairs Committee, fumed: “Manipulation and untruths are common methods in the propaganda used by the Russian leadership.” Others including German Foreign Minister Frank-Walter Steinmeier also slammed the Kremlin over its role in the affair, accusing Moscow of attempting to ‘inflame and influence’ the migration debate in Germany with ‘political propaganda’.

The angry official response in Germany reflected the palpable sense of shock felt in Berlin over Russia’s use of hybrid war tactics against what is the most powerful EU member state and a former key Kremlin partner. Most Western capitals will share this sense of shock, leading to fresh debate over the need to combat the Russian information war in a meaningful and coordinated fashion. Moscow’s decision to deploy its infowar arsenal in the heart of the EU will serve as a wakeup call for all those who have previously attempted to portray the Ukraine conflict as local dispute in a faraway land that does not pose a threat to the broader international community.

The events of late January in Germany have served to highlight the ability of the Kremlin to destabilize the domestic situation in any country with a sizable Russian immigrant population, and the readiness of Russian-speaking groups to join forces with local far-right elements. The idea of Putin’s ‘little green men’ appearing in the streets of Berlin, Paris or London may still seem somewhat far-fetched, but few would now doubt Russia’s ability to launch destabilizing information attacks or stir up proxy protests throughout the Western world.