Identifying the icons that reflect Ukraine's ongoing emergence as an increasingly self-confident independent nation after centuries of division, foreign rule and imperial oppression 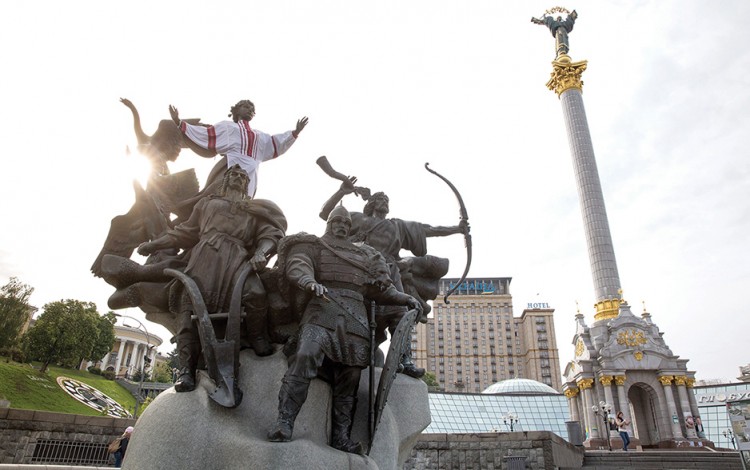 Ukraine has changed dramatically over the past quarter century of independence. The legacies of foreign rule and imperial domination have made the country’s quest for an inclusive identity particularly challenging, but shared national experiences since 1991 have given Ukrainian society a sense of self that became particularly apparent in spring 2014, when it proved crucial in derailing the Kremlin’s ‘Novorossia’ partition project. As Ukraine celebrates 25 years as a sovereign state, Business Ukraine magazine offers up five key icons of independence that epitomize Ukraine’s ongoing state-building progress.

In the early years of Ukrainian statehood, Kyiv’s Independence Square was a symbol of the pseudo-independence Ukraine enjoyed following the Soviet collapse. Dominated by the looming Moscow guest house on one side and a huge Soviet hammer and sickle on another, it seemed more like a monument to lingering Kremlin influence than the central square of a free nation. The revolutions of 2004 and 2014 changed all that. Maidan served as the focal point for both the Orange Revolution and the Euromaidan Revolution, placing the square firmly at the centre of the Ukrainian historical narrative and imbuing the word ‘Maidan’ with international recognized political potency. No longer a bad joke, today’s Maidan is the spiritual soul of the independent Ukrainian nation and a source of constant nightmares in Moscow.

During the Soviet era, the Ukrainian famine of the 1930s had been one of the great taboos. Initially denied completely, it was later attributed to natural causes. Since 1991, recognition of the famine as a deliberate act of genocide against the Ukrainian people has played a major part in the country’s post-Soviet healing process. While other aspects of historical revisionism have proved particularly painful for Ukrainian society to digest, few in Ukraine have opposed efforts to honour the millions who perished in Stalin’s most monstrous crime. The process began in the early years of independence, and gained significant momentum during the presidency of Viktor Yushchenko. Holodomor memorials now dot the country, serving to remind the present generation of the terrible price paid for the survival of the Ukrainian nation.

For the first two decades of Ukrainian independence, the country’s militia stood out as a symbol of continuity with both the Soviet past and the Russian present. The uniforms of Ukraine’s law enforcement officers differed little from those worn by their Russian contemporaries or their Soviet predecessors, while ubiquitous associations with incompetence and corruption strengthened perceptions of a country still firmly rooted in the Kremlin orbit. All that changed with the 2015 launch of the Patrol Police – the first stage in the massively ambitious post-Maidan reform of Ukraine’s law enforcement organs. Dressed in modern uniforms reminiscent of the NYPD, the Patrol Police brought a new ethos of public service to Ukrainian policing and have become the unofficial face of the new Ukraine. The public response to this police reform has been emphatic, reflecting the widespread hunger for change in Ukrainian society and continued readiness to embrace the ‘rule of law’ values that drove both the Orange Revolution and the Euromaidan Revolution.

Ukraine’s post-Soviet national evolution has often been a grassroots affair, with few national institutions gaining widespread credibility. The exception is the Ukrainian Premier League, which has become a popular national icon capable of attracting regular international recognition. This success is partly the result of Ukraine’s historic pedigree as a regional hotbed of footballing excellence. It is also partially due to the considerable investments made by regional oligarchs into their local clubs – a kind of informal social tax that was particularly popular during the 2000s. This influx of often ill-gotten oligarchic wealth helped make Ukrainian football clubs among the richest in Eastern Europe, boosting their ability to hold on to domestic talent while attracting international stars of increasingly high caliber. The Ukrainian Premier League has regularly featured among Europe’s top ten football leagues, with UPL teams consistently competing in the latter stages of UEFA club competitions. High points have included Dynamo Kyiv’s march to the UEFA Champions League semi-finals in 1999, and Shakhtar Donetsk’s 2009 UEFA Cup triumph. However, it is on the domestic scene that the league has had its biggest impact. Fans of UPL teams have travelled across the country for leagues games for the past 25 years, building up rivalries and friendships between clubs along the way. While the so-called ‘ultras’ associated with each club often engaged in hooligan violence, they all shared a sense of patriotism that was not always mirrored in broader Ukrainian society. This patriotic mood came to the fore during the Euromaidan Revolution, when fans from UPL clubs across the Yanukovych heartlands of southern and eastern Ukraine came out in support of the protests and offered protection from government thugs.

When Russia launched a hybrid war against Ukraine in early 2014, few expected the country to survive. There was no Ukrainian Army to speak of, and the government was in post-revolutionary disarray. What happened next was a miracle of truly historical proportions. Thousands of ordinary Ukrainians from all walks of life set off to the front lines in east Ukraine as volunteers. They received support from an even larger grassroots volunteer movement that supplied them with clothing, food, medicines and anything else that could be bought, begged, or borrowed. Ukraine’s volunteer army played a key role in stemming the tide of Putin’s hybrid onslaught, linking up with threadbare state forces to limit the Russian incursion to less than half of Donetsk and Luhansk oblasts. It was an army of Russian and Ukrainian speakers, Orthodox Christians and Greek Catholics, Jews and Muslims, reflecting the cosmopolitan complexity of modern Ukrainian society. This volunteer army also mirrored Ukraine’s 25-year state-building experience, with ordinary Ukrainians making up for the shortcomings of the state via ingenuity, initiative and sheer strength of character.