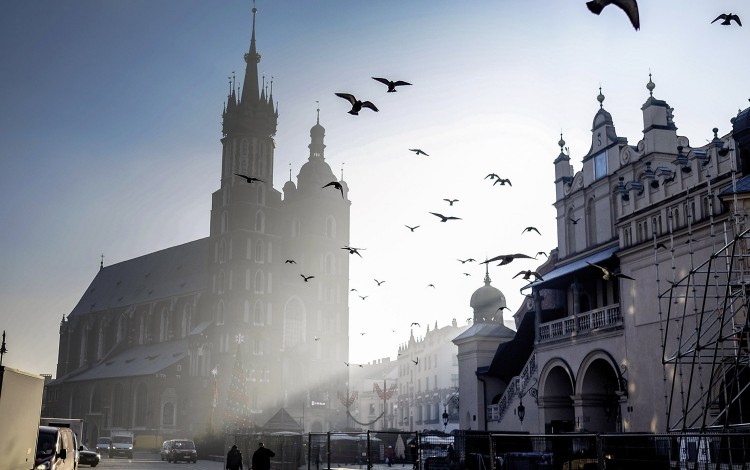 Beautiful Krakow is one of Poland's most popular university cities. Ukrainians currently make up more than half of the international undergraduate population following a huge rise in Ukrainian student applications since 2014
Emilia Jasiuk

The number of foreign students enrolling at Polish universities continues to grow year-on-year and currently includes representatives of 157 countries. The largest single group comes from Ukraine and totals 30,589, representing 54% of the total number of foreign students currently studying in the country. This unprecedented growth in the Ukrainian undergraduate community is the product of the current domestic instability caused by Russia’s hybrid war in Crimea and eastern Ukraine, but it also stands as testament to the growing reputation of Polish institutes of higher education.

Polish academic traditions date back to the 14th century, when the Jagiellonian University of Krakow was established in 1364. This academic pedigree has produced some of the world’ greatest minds. Poland’s Nicholas Copernicus, who was born in Toruń, is widely acknowledged as a symbol of the scientific revolution that changed international perceptions of the world we live in and its place in the wider universe.

Polish universities are a fully integrated part of the European education space while offering studies at relatively low costs, making them an attractive option for an increasing number of young people from around the globe. All the leading Polish universities currently offer programmes taught in English covering disciplines including medicine, engineering, humanities, business and finance. Foreign students can also study in Polish – there are many ways to learn the language including yearly preparatory courses offered all over Poland.

Poland’s foreign student contingent has been steadily expanding for the past decade. In 2006, the total figure was just over 10,000. This has now climbed to over 57,000 – or more than 4% of all students studying at Polish universities. Over half of these foreign students are from Ukraine, making them by far the dominant community among Poland’s international undergraduates. While Ukrainians account for 54% of all foreign students, the next national group are Belarusian students, who make up just 8% of the international total. These figures represent a major increase in the number of Ukrainian students in recent years. In 2012, the largest contingents of international students came from Tajikistan (18.9%), Thailand (13.6%) and Egypt (7.7%). At the time, Ukrainians made up just 4.8 percent of the overall international student community. The academic focuses of foreign students in Poland are management (12.25%), medicine (11%), international relations (8.81%), tourism and recreation (7.15%) and economics (6.24%).

The Polish education system allows for both state and private institutions of higher education. To qualify for admission, any applicant must hold a maturity certificate. Each individual institution determines its own detailed rules of admission autonomously. According to the Higher Education Act of 2005, syllabuses in all fields of study except law, pharmacy, psychology, veterinary medicine, medicine, and dentistry are taught on a two-cycle basis. The third cycle, doctoral studies, is only open to those who hold the academic title of Master (magister) or an equivalent title or degree. Doctoral studies last four years but may be shortened or extended depending on the subject matter.

Poland takes an active part in the Bologna Process, which aims to foster a broader European Area of Higher Education. Thanks to the ECTS (European Credit Transfer System), students with Polish higher education can enjoy full European mobility and continue their education in other countries. The goal of the Bologna Process is to simplify procedures for comparing educational qualifications from different participating countries in order to allow students to receive credit across borders and benefit from greater flexibility. Polish institutions of higher education are also engaged in the international exchange of students. Programs like SOCRATES/Erasmus, bilateral agreements, and the individual activities of schools all contribute to the development of contacts between Polish and foreign higher education institutions.

Polish Ministry of National Education regulations determine which foreign academic qualifications Polish institutions of higher education are able to recognize. On the webpage of the Bureau for Academic Recognition and International Exchange (www.buwiwm.edu.pl) you can find the legal regulations concerning validation of diplomas received abroad, including a list of countries with which Poland has signed agreements for the mutual recognition of diplomas. If a given diploma is covered by such an agreement, it is automatically validated in accordance with the content of the agreement. If a given diploma/certificate is not covered by an interstate agreement, or was issued in a country with which Poland has not signed an agreement regarding the mutual recognition of educational levels, then it becomes the subject of the Decree regarding the nostrification of diplomas acquired abroad. Diplomas falling into this category need to be presented at the local Ministry of Education Office (Kuratorium).

With thanks to the CRASP (Conference of Rectors of Academic Schools in Poland) and Perspektywy Education Foundation.

About the author: Emilia Jasiuk is the Head of Section for Cooperation in Science and Education at the Polish Embassy in Ukraine